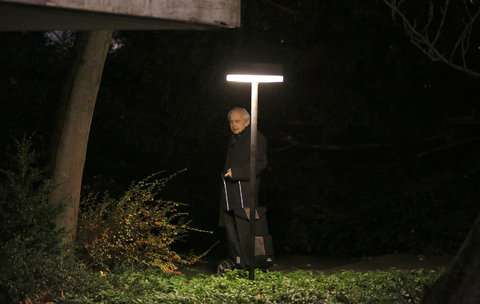 Bestimage/Paris Match, via Fameflynet Cornelius Gurlitt, 80, near his Munich apartment on Friday.

MUNICH – Cornelius Gurlitt, the 80-year-old recluse who kept roughly 1,400 artworks hidden in his Munich home, left his apartment building Tuesday and took a taxi to the airport, witnesses said. It was not clear where he was heading. A woman who escorted Mr Gurlitt to the taxi and then drove off with him appeared to be Ozlem Gezer, an investigative journalist for Der Spiegel, Germany’s leading news magazine. The magazine declined to comment.

Mr. Gurlitt had secluded himself in his apartment since another German magazine, Focus, reported on Nov. 3 that the authorities in February 2012 had confiscated paintings and drawings, including some possibly looted during the Nazi era. Mr. Gurlitt’s father, Hildebrand, was one of a handful of art dealers authorized by the Nazis to trade in art during the war. The younger Mr. Gurlitt has declined all interview requests and refused to answer his telephone or his doorbell.

According to a neighbor, a handwritten note was posted on his door on Sunday saying he needed to be left undisturbed because of a heart problem. The note, which has since been removed, appeared to have been written by Mr. Gurlitt and also said that he would issue a written statement soon.

Mr. Gurlitt, dressed in a long gray coat and a plaid scarf and looking very pale, walked with an umbrella from his apartment building to a taxi, pulling one piece of wheeled luggage.