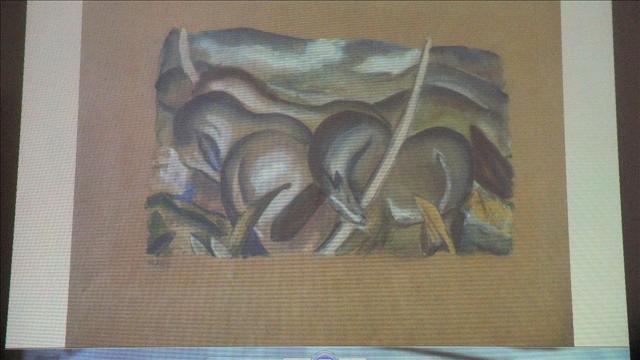 Police near Stuttgart took possession of artwork in a local residence connected to Cornelius Gurlitt, the man at the center of an investigation into a cache of lost, Nazi-confiscated art. Mary Lane reports. Photo: AP.

BERLIN—Germany announced moves to speed research into the provenance of a recovered wartime art stash and said it would publish more details of the works amid a wave of international criticism of authorities' handling of the discovery.

In a joint statement, federal and Bavarian authorities said they would form a task force with at least six researchers specializing in the tracing the ownership of artworks. Works that the research indicates may have been seized or taken from Jews or others persecuted by the Nazis will be posted on the site lostart.de, the website of a government-backed unit that registers cultural property lost or confiscated during the Nazi regime.

In a first step, officials posted details Monday on 25 paintings that they said they strongly suspected were looted by the Nazis.

Of the collection of roughly 1,400 artworks, 970 required investigation, officials said, adding that 380 of them may be works the Nazis had deemed "degenerate art." They said 590 pieces would be researched as works possibly looted by the Nazis.

Many of the 25 pieces posted Monday were works on paper by relatively unknown artists or among the handful of works already disclosed by investigators last week.

One work on paper was a 1922 piece by Otto Dix, "Woman in the Theater Box," depicting an aristocrat dressed up for an opera or theater performance. The work had been labeled as degenerate art by the Nazis, according to the site, as was another Dix work posted—the "The Female Lion Tamer," also from 1922. Drawings by Auguste Rodin and Eugene Delacroix, as well as a Marc Chagall painting were also in the group.

At least two of works are ones for which families are actively seeking restitution, including "Woman Sitting"—an oil painting by Henri Matisse, which once belonged to the prominent French dealer Paul Rosenberg.

Another was an oil painting by Max Liebermann from 1901 called "Riders on the Beach," which records show once belonged to David Friedmann, a prominent Jewish collector who had lost possession of the work in the late 1930s. The work has been registered with the lostart.de database for several years, but the site hadn't previously confirmed that government officials had possession of the work, according to Jörg Rosbach, the lawyer who represents the family of Mr. Friedmann.

U.S. officials, as well as groups representing Holocaust victims and families with potential claims to the art, have been urging Berlin to disclose detailed information about the trove, which was found in the Munich residence of Cornelius Gurlitt, the elderly son of a deceased art dealer for the Nazis.

Prosecutors in Augsburg, Germany, had until now declined to make a list of the works public amid fears it would unleash a wave of fraudulent claims from fortune seekers. They kept the trove secret for nearly two years, citing privacy laws concerning a tax-evasion probe that led to the discovery.The moves by Germany's federal government and regional authorities come amid pressure since last week from the U.S. State Department for the German government to take control of the case from local authorities. State Department officials have argued that the matter of investigating the recovered trove of art is an international one, U.S. officials said.

State Department officials traveled Friday to Bavaria to discuss the discovery with tax authorities, according to a person familiar with the matter.

German foreign ministry officials also met with U.S. Embassy officials to discuss the matter last week, officials from both countries said. The person familiar with the talks said that in the meeting, State Department officials urged Germany to publish the list of works in Mr. Gurlitt's collection, knock down the country's 30-year statute of limitations on stolen art and establish a formal claims process for victims to recover their works.

Amid international criticism of German investigators' handling of the case, Chancellor Angela Merkel's chief spokesman, Steffen Seibert, sought to provide reassurance earlier on Monday that Berlin was pursuing the clarification of the works' origins.

"We need to find a way of publishing the artworks with dubious origins independently of the current criminal proceedings; to harmonize the interests of a constitutional investigation, the justified interest of the international public and possibly also of aggrieved persons," Mr. Seibert said.

Germany's Foreign Minister Guido Westerwelle also weighed in on the debate, calling for transparency and warning that Germany "shouldn't underestimate the sensitivity of this issue in the world," Spiegel Online reported.

"We need to be careful not to gamble away the trust that we have built up over many decades," Mr. Westerwelle was quoted as telling journalists during a visit to India.

Prosecutors discovered the more than 1,400 works—thought to have been amassed during the Nazi regime by Cornelius Gurlitt's father Hildebrand Gurlitt —during a tax raid on the younger Mr. Gurlitt's apartment in Munich in early 2012.

On Sunday, police took possession of 22 more artworks in connection with the Gurlitt case from a house near Stuttgart, a police spokeswoman in the town said. German newspaper Bild said Nikolaus Frässle, Mr. Gurlitt's brother-in-law, lives in the house and contacted the police to ask them to pick up the art because he was concerned about security. Calls to Mr. Frässle's Kornwestheim residence went unanswered.

It is still unclear how many of the works in Cornelius Gurlitt's roughly 1,400-piece collection were acquired by his father during World War II and how many are ones he acquired in the years after the war before he died in a car crash in 1956.

According to a report by the German finance ministry cited in Germany's Bild, Mr. Gurlitt wouldn't have to return once-confiscated works purchased by his father from museums during the war.

The finance ministry refused to confirm or deny the report, directing any questions to the Augsburg prosecutor's office. That office couldn't immediately be reached for comment.

Mr. Gurlitt, a reclusive man of about 80, couldn't be reached for comment. He had kept out of the intense media coverage of the recovered art trove until Saturday, when Paris Match published a photo on its website of Mr. Gurlitt shopping in Munich. Ekkeheart Gurlitt, a distant cousin who lives in Barcelona, confirmed by telephone that the man in the photo is his relative Cornelius.