Munich police have discovered another hoard of looted Nazi art held by Cornelius Gurlitt – in his brother-in-law’s flat. 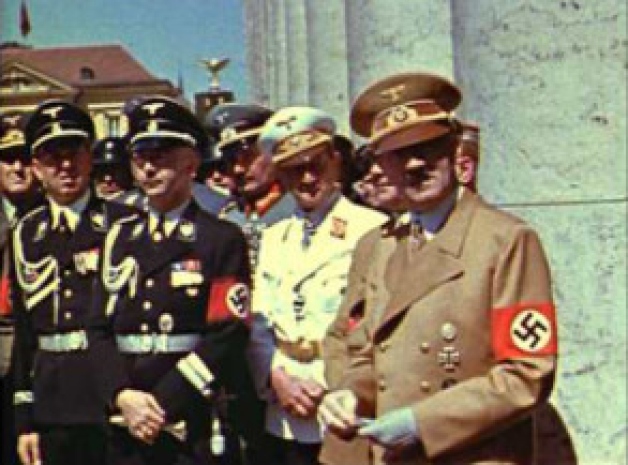 Adolf Hitler and Nazi officials in Munich in the summer of 1939. Picture: AP

Some 22 masterpieces worth untold millions were taken from the town of Kornwestheim in the southern state of Baden-Wuerttemberg, 150 west miles from where the 79-year-old Gurlitt’s billion-pound treasure trove was seized last year.

Mr Gurlitt’s sister, Benita Fraessle-Gurlitt, was married to Nikolaus Fraessle before her death several years ago. On Saturday afternoon Mr Fraessle’s flat in the town was the scene of frenzied activity as police and customs officials descended.

Mr Fraessle himself had informed police about the artworks, following the hue and cry about the find in Gurlitt’s Munich flat – which only became known to the public last week – because he was “worried” about their security in his home.

Earlier in the week officials downplayed the possibility of a second hoard of masterpieces but now the suspicion is rising that Mr Gurlitt – whose father Hildebrand was a Nazi-era art dealer with direct contact to Adolf Hitler and his propaganda minister Joseph Goebbels – may have more treasures scattered at secret locations across Germany.

The Fraessle-Gurlitts were, according to one media report in Germany, “probably the sole caregivers to the elderly and reclusive Cornelius”. But there is still no sign of him – he vanished after his collection of 1,406 paintings was seized last year.

The latest paintings were seized after it became known that a portion of his father’s collection, which he dipped into from time to time to sell in order to raise funds to live, was strong-armed from a Jewish collector desperate to raise the funds to flee Nazi Germany.

“There is a ‘high probability’ that 181 artworks are part of a collection which belonged to a Jew from Dresden who was forced in 1933 to sell the collection,” said the ZKA, German customs’ criminal investigation department, in a memorandum on the case to the Bonn office of the federal finance ministry.

Customs also have business books of Hildebrand, who bequeathed the paintings post-war first to his wife and later to Cornelius. They show he sold on “degenerate art” banned by the Nazis to collectors in Hamburg, Dresden and Berlin.

“This was against the law in Nazi Germany and he would have made himself punishable if he had been discovered having done so,” said the report.

Four of the framed, and 311 of the unframed paintings taken by customs officials in a three-day clear out of Gurlitt’s shabby apartment in February last year were displayed in the Nazi’s “Degenerate Art” exhibition of 1937 – a show of everything Hitler hated about modernism.

They are the property of either museums in Germany or the heirs of the original owners.

Officials do not believe they will be able to charge Cornelius Gurlitt with much more than tax evasion if they do eventually catch up with him.

Hildebrand, because he had a Jewish grandmother, convinced authorities after the war he was a victim, not a persecutor, and many paintings seized from his collection were later returned. He carried on dealing until his death in a 1956 car crash.