BERLIN—Reinhold Nemetz may have uncovered an international sensation—a mysterious trove of art, much of it previously confiscated by the Nazis—but he's more focused on clearing up tax evasion.

"We don't see our task as art-historical," the district attorney of the Bavarian city of Augsburg told reporters this past week, shrugging off the clamor for more information about the more than 1,400 artworks found in a Munich apartment in the course of his tax investigation. 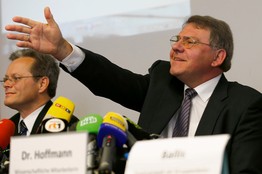 The refusal by Bavarian authorities to identify more than a handful of the works—which include pieces by masters such as Pablo Picasso, Henri Matisse and Pierre-Auguste Renoir—is drawing criticism from groups representing the heirs of Jewish collectors who lost their art to the Nazis, as well as from the U.S. government.

Germany's federal government also weighed in last week, calling for greater transparency so that the artworks' provenance could be established quickly. The Berlin government says it is likely that at least some of the art was wrongfully taken from its owners by the Nazi regime.

But Mr. Nemetz, whose team of prosecutors in Augsburg kept the art discovery secret for nearly two years, has made it clear he's unhappy the story leaked into the media because it makes his tax investigation harder.

The 62-year-old chief prosecutor's preference for secrecy is a consequence of German legal tradition, as well as of Mr. Nemetz's single-minded personality, say people who know him.

Germany has for centuries kept criminal investigations under wraps until trial. Even trials themselves were held in secret until the mid-19th century

Matthias Nickolai, spokesman for the Augsburg prosecutors' office, says it would be a crime to disclose more than rudimentary information about the case.

Augsburg is an unlikely center of art-world attention: The university town of 270,000 inhabitants is famous in Germany mainly for its puppet theater.

But in Bavarian legal circles, it is also known for its hard-charging district attorney, Mr. Nemetz, who seized control of the case before prosecutors in the bigger city of Munich, where the art was stashed, could take it.

Mr. Nemetz is renowned in Bavaria for his determined, detailed and sometimes lengthy investigations, including his yearslong pursuit of a controversial arms-industry lobbyist for tax evasion and bribery. "The Augsburg prosecutors are known for being stringent," says Arnd Koch, a law professor at the University of Augsburg.

German media including the magazine Focus, which first reported the find Nov. 3, say the 1,406 paintings, drawings and other works were hidden in a Munich apartment belonging to Cornelius Gurlitt, a reclusive man of about 80 whose deceased father had been an art dealer for the Nazis.

Prosecutors found the art in early 2012, after a lengthy probe that began in 2010 when customs officials found a suspect carrying a suspiciously large amount of cash on a train from Zurich to Munich. Prosecutors won't confirm or deny that the suspect is Mr. Gurlitt, as has been widely reported.

Prosecutors will only say they're investigating "a male suspect," who hasn't been charged, for possible tax offenses and embezzlement. Mr. Gurlitt, whose whereabouts is unknown, couldn't be reached for comment.

Mr. Nemetz's team relied on only one art historian to help them trace the provenance of the art—a decision which has slowed the investigation and drawn criticism from other provenance researchers, who say expertise should have been sought more widely.

But Mr. Koch, the law professor, says that would have led to the probe leaking earlier, which could have made it harder to investigate a wider circle of players in the sale of paintings that may have been wrongfully acquired. The prosecutor's office won't confirm that was a reason behind its secrecy, but say it is "a possibility."

Mr. Nemetz is also drawing fire for his blunt refusal now to publish a catalog of the works. If victims of Nazi expropriation or their heirs want to know whether their families' lost paintings are in the cache, they should write to his office, Mr. Nemetz said last week.

That was "a typical German statement and precisely the wrong formulation," Willi Korte, a leading art-provenance researcher, told the daily Frankfurter Allgemeine Zeitung. The onus should be on German authorities to be open and help potential victims of the Nazis, he said.

"Critics can say what they want. Our central goal is to investigate crimes," says Mr. Nickolai, the Augsburg prosecutors' spokesman.

Representatives from the U.S. Embassy in Berlin met with the German government on Thursday to press their demands for more disclosure in authorities' handling of the trove. A person familiar with the matter said the U.S. has also urged Germany to repeal its 30-year statute of limitations for the restitution of art stolen under the Nazis.

Mr. Nickolai said the Augsburg prosecutors might have to rethink their approach, now that the case has become public against their will. But "we're in no hurry," he said.

Write to Marcus Walker at marcus.walker@wsj.com