The art world was stunned by the revelation this week that some 1,400 works of art, including some that were apparently acquired from looted Jewish collections, had not only been found hidden behind juice and cereal boxes in a small Munich apartment but that the German tax authorities who raided the apartment had kept the whole event secret for more than a year. This is secrecy par excellence: The owner of the stash is nowhere to be found, the pictures are at an undisclosed location and no inventory has been provided. 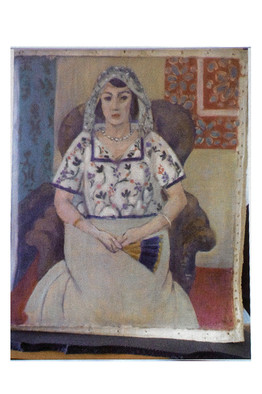 A photograph of Matisse's 'Sitting Woman' as it was presented during a recent press conference in Augsburg, Germany. The work was among some 1,400 works discovered hidden in a small Munich apartment. Marc Mueller/picture-alliance/dpa/AP Images

According to the German news magazine Focus, which broke the story on Sunday, it all began in September 2010 when an elderly man, Cornelius Gurlitt, was found by customs officials to be carrying 9,000 euros ($12,175) and some empty white envelopes while on a train between Zurich and Munich. This prompted them to launch an investigation into tax evasion, which led them to raid Mr. Gurlitt's Munich apartment in February 2012 and discover the art, which they then removed.

The hoard includes paintings and works on paper—some completely unknown—by Henri Matisse, Pablo Picasso as well as German modernists such as Otto Dix, Max Beckmann and Ernst Ludwig Kirchner. All were artists vilified by the Nazis and many were included, along with a wide range of other modernists, in the Nazis' 1937 exhibition of "Degenerate Art," which opened in Munich and then traveled throughout Germany and Austria. Mr. Gurlitt is believed to have inherited the trove from his father, Hildebrand Gurlitt, an art historian dedicated to modern German art who was dismissed in 1933 by the Nazis from his museum post for his "degenerate" acquisitions; he later became an art dealer. The discovery was not publicly acknowledged until Tuesday when, in the outcry following publication of the Focus story, officials held a press conference in Augsburg, Germany.

No one should be surprised by this sort of discovery. Indeed there have been quite a number of these during the past 25 years or so. One thinks of the Quedlinburg church treasures that turned up in Texas, sent there by a G.I. from Germany, and, more recently, the discovery that Bruno Lohse, a henchman of Hermann Göring's , had a Swiss vault full of loot. There will surely be more discoveries in the future as the wartime generation, and now even their heirs, dies. The difference between the latest revelation and the others is its magnitude: This huge find is said to be worth billions, a figure that impresses.

Few outside the art world are aware of the fact that Nazi art and looting agencies operated large bureaucracies that not only purged the museums of Germany itself of the so-called Degenerate Art, but ran confiscation programs at home and in the occupied countries. They also had phalanxes of dealers who bought approved art on a gigantic scale for the Nazi leaders and museums of the Reich, thereby creating a huge boom in the European art market.

Much fell between the cracks in these efforts, and the various agents and dealers involved, almost without exception, were found to have private stashes after the war. Many of these holdings were taken into custody by the Allies and are enumerated in some detail in the reports of Allied investigators who, between 1945 and 1952, returned many millions of objects to the countries from which they had been taken. They clearly did not find it all.

Hildebrand Gurlitt figures strongly in these reports. Arrested in 1945, along with others of the same ilk at the home of one Baron von Poellnitz at Aschburg, he was interrogated by both French and U.S. officials working in Germany. More than 200 works of art, said to be Gurlitt's personal collection, were also taken into custody at the time and kept at the Wiesbaden Central Collecting Point. An unknown number, found to belong to France, were returned there and, after five years, 134 paintings and drawings, as well as a number of objets d'art, were returned to Gurlitt, including some mentioned in the current news reports. A list of what these were can be found on the U.S. National Archives document website at www.fold3.com (keyword: Gurlitt). [and on the homepage of www.lootedart.com]

Also easily available is the testimony of Gurlitt's boss, Hermann Voss, who, though known to be anti-Nazi, became head of Hitler's art agency, the Linz organization. Voss sent Gurlitt to France and Holland to acquire art. Voss also describes Gurlitt's flight from Dresden and states that Gurlitt left before the official holdings were evacuated. So even in 1945 it was known that Gurlitt's collection had not all been destroyed. Much later, in a 2005 article published in the American Association of Museums publication "Vitalizing Memory," German provenance researcher Katja Terlau described Gurlitt's life and activities in detail and warned that any ownership history that listed him should be investigated.

Much puzzlement has been expressed at the fact that Gurlitt was part Jewish, yet still traded in objects taken from Jews, especially in France. This was far from rare. Providing a steady supply of art to the Nazi leaders was one of the best survival policies there was for a Jew. And Gurlitt, known for his promotion of Degenerate Art, and fired by the Nazis from his job as director of the Art League of Hamburg in 1933, needed protection.

Like Gurlitt, some of the most notorious players in the looted-art business had good reason to deal with Hitler and Göring. Alois Miedl, who worked for Göring in the Netherlands and "bought" the Goudstikker firm—at the time the most important Dutch dealer in Old Master paintings—had a Jewish wife; Wilhelm Wickel, who was the Nazi liason between dealers in the Netherlands and the Linz organization, was part Jewish. He in turn recruited Dutch-Jewish dealers, who were exempted from wearing the Star of David and from deportation as long as they kept the art coming. (The documents of this form of blackmail, available in the German archives, make nasty reading.)

The same was undoubtedly true for the swarm of Jewish dealers who hung around the French headquarters of the Einsatzstab Reichsleiter Rosenberg, one of the Nazi agencies in charge of expropriating cultural property, and marketed the things from confiscated collections that the Nazis could not take home to their degenerate-art-free country. But theirs was a schizophrenic existence; in saving themselves the dealers often made considerable fortunes and were able to acquire plenty of stocks for the future, such as those in the Munich trove.

According to the provenance researcher Ms. Terlau, Gurlitt was known after the war to have been instrumental in urging the restitution of works hanging in the museums he bought for. But he seemingly did not apply this altruistic attitude at home.

Not surprisingly, potential claimants of all varieties, outraged by the secrecy surrounding the Munich discovery, are making themselves heard. Prominent among them are the heirs of Paul Rosenberg, one of the most important dealers in modern art in Paris—or anywhere—before the war. The blame game is in full cry. In particular, the German authorities are being criticized for not immediately publishing an inventory. And it was certainly naive of them to think that a find of this magnitude could be concealed. Authorities have countered that before releasing a list they first need to determine what is in the hoard and to whom it belongs so they can collect unpaid estate taxes and prepare to handle claims. Some details were given out at Tuesday's press conference—a mere handful of artists and artworks. But the current media circus is not going to make it easy for them to maintain their silence as they have done so far.

There are a number of probable categories for the contents: First, works that can be proved to have been looted from individuals inside Germany and other nations that should be returned immediately once identified. Second, works purchased from private individuals that may or may not have been sold under Nazi duress. Third, works obtained while Gurlitt was involved in the mad sell-off of "degenerate" works by the Nazi government, that, if stolen by him might be returned to the museums, but if bought by him would technically be his and therefore, now, his son's. Finally, works legally owned by Hildebrand, who, like the rest of his family, was a dealer and collector in pre- and postwar Germany. There might be quite a few of these—an artist relative named Louis Gurlitt is represented by some 20 entries on the list of the objects returned by the Allies in 1951.

There is much more about this trove that needs to be investigated. It is especially odd that Cornelius Gurlitt (where could he be?) was able to make a deal with the claimant heirs of the dealer Flechtheim, after his detention for tax evasion but before the seizure of the stash, for more than $1 million for a work by Max Beckmann; supposedly at the time no one knew yet of the existence of these works. In the immortal words of Ludwig Bemelman's Miss Clavel : "Something is not right," and further revelations are certain.

Ms. Nicholas is the author of "The Rape of Europa: The Fate of Europe's Treasures in the Third Reich and the Second World War."