A list of art compiled by U.S. troops in 1950 may help Jewish heirs identify works looted by the Nazis that wound up in a squalid Munich apartment, researchers from the Holocaust Art Restitution Project said.

U.S. troops vetted Hildebrand Gurlitt’s collection -- including works by Max Beckmann and Edgar Degas -- and handed it back to him 63 years ago, according to a custody receipt that Marc Masurovsky and Willi Korte, researchers at HARP, found yesterday in the National Archive in Washington.

The artworks, listed over five pages, were held by the allies and returned in 1950. They may have formed the basis of the collection of Cornelius Gurlitt, Hildebrand’s son. Prosecutors said they won’t publish an inventory of the 1,400 works seized in Gurlitt’s Munich apartment. Groups representing the heirs of Jewish victims of Nazi persecution protested the secrecy. 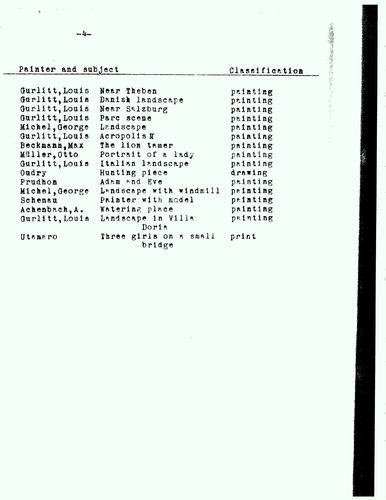 A page from an inventory of Hildebrand Gurlitt's art collection in 1950, found by researchers at the Holocaust Art Restitution Project. The U.S. military missed a chance to seize the works 63 years ago, the document shows

“A great many people don’t know what is missing from their collections,” Wesley Fisher, Director of Research at the Conference on Jewish Material Claims Against Germany, said by telephone from New York. “This secrecy is not going to help families. Many of the items that clearly seem to have come from France may have been seized or lost in forced sales.”

Authorities seized Cornelius Gurlitt’s cache of more than 1,400 paintings, lithographs, drawings and prints as part of an investigation on suspicion of tax evasion in a three-day operation in March 2012.

It took 1½ years to announce the hoard. Though refusing to provide a list of the works, the Augsburg prosecutor said it includes works by Beckmann, Pablo Picasso, Oskar Kokoschka, Franz Marc, Pierre-Auguste Renoir and Max Liebermann.

The German government is examining ways to help Augsburg prosecutors publish details of at least those works that are known to have been looted, said Steffen Seibert, Chancellor Angela Merkel’s chief spokesman. He said government provenance researchers are helping with law enforcers’ enquiries.

Seibert said the government is committed to finding just and fair solutions to the problem of looted art in private as well as public collections.

Paintings on the five-page list from the National Archive include Beckmann’s “Lion Tamer,” which Cornelius Gurlitt sold via Kunsthaus Lempertz in Cologne in 2011 after settling with the heirs of Alfred Flechtheim, a Jewish dealer persecuted by the Nazis and forced to flee Germany.

“Against the backdrop of the current revelations about the Gurlitt collection, the Flechtheim heirs are looking into whether there are any further works that used to be in Flechtheim’s possession in the seized trove of paintings,” the heirs said in a statement sent by e-mail by the lawyer Markus Stoetzel.

The list obtained by Korte and Masurovsky also includes a Degas nude, several Beckmann oils, two Courbet paintings and an Otto Dix self-portrait -- probably the same one investigators projected onto a screen at a news conference in Augsburg.

Some works from the Munich stash were seized by the Nazis from German museums, while others may have been sold by Jewish owners under duress, said Meike Hoffmann, the investigating art expert. She declined to comment on estimates valuing the hoard at 1 billion euros ($1.35 billion).

Masurovsky said Gurlitt regularly acquired works at the Jeu de Paume in Paris, where the Nazis assembled art looted from French Jewish families during the occupation. Under agreements between the Allies, art looted from France was returned to the French government after World War II.

“I am wondering when the German government is going to call France about returning some of this,” Masurovsky said. “There are clearly some works in the collection that came from France.”

Hildebrand Gurlitt (1895-1956) was one of just four art dealers permitted by the Nazi authorities to sell artworks seized as “degenerate” from German museums from the end of 1938 to 1941.

Though they were instructed to sell them abroad for hard currency, the four passed many on to fellow German dealers or kept them for themselves, according to the Free University’s “Degenerate Art” website.