The art historian who has been studying the collection since its discovery gave a first glimpse of the trove, which includes modernist works as well as older pieces dating back as far as the 16th century, at a press conference in Augsburg, southern Germany.

Treasures discovered during a raid on Cornelius Gurlitt's flat in Schwabing include a total of 1,406 works – 121 of them framed – by Franz Marc; Oskar Kokoschka; Henri de Toulouse-Lautrec; Max Liebermann; Ernst Ludwig Kirchner; Max Beckmann; Albrecht Dürer; a Canaletto sketch of Padua; a Carl Spitzweg etching of a couple playing music, a Gustave Courbet painting of a girl with a goat, and drawings and prints by Pablo Picasso.

Art historian Meike Hoffmann, of the Free University of Berlin, said the art world would be particularly excited about the discovery of a valuable Matisse painting from around 1920 and works that were previously unknown or unseen: an Otto Dix self-portrait dated around 1919, and a Chagall gouache painting of an "allegorical scene" with a man kissing a woman wearing a sheep's head. 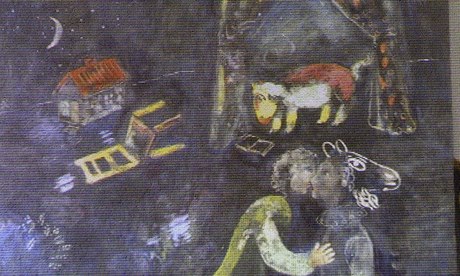 Reproduction of a previously unknown work by Marc Chagall is seen during a press conference in Augsburg, southern Germany. Photograph: Christof Stache/AFP/Getty Images

Hoffmann said it had been "an incredible feeling of joy" to discover these paintings in good condition. She refused to give her view on the collection's worth, though unofficial reports have estimated its value at €1bn (£860m).

While previous reports had emphasised the messy conditions inside Gurlitt's flat, the customs officials insisted that most of the pictures had been stored professionally and were in a good condition; only a couple of paintings had been slightly dirty.

Customs officials also used the press conference to correct a number of initial press reports. They said the flat had been raided on 28 February 2012, not in early 2011 as Focus magazine had reported on Sunday. Gurlitt had taken no particularly unusual measures to safeguard his flat from intruders: "keeping things secret is the best way to keep them safe", said Munich customs official Siegfried Klöble.

Removing the works had taken three days. They were now kept at a safe location.

Gurlitt had sold a Max Beckmann painting to a Cologne auction house in September 2011, inviting speculation that he had another stash of artworks hidden in another location. Gurlitt, who is an Austrian national and wasn't registered in Munich, owns another property in Salzburg. But Klöble said the existence of more hidden artworks was "not likely".

The mystery around Gurlitt himself, meanwhile, has thickened. The whereabouts of the 80-year-old are not known, said the customs authorities. When asked by one journalist if Gurlitt was still alive, Augsburg chief prosecutor Reinhard Nemetz said he could not comment.

The emergence of old masters like Dürer and Canaletto among the modernists further complicates the picture of the extraordinary art trove. Initial speculation had been that most of the pictures were "degenerate art" looted or confiscated by the Nazis. Now it looks likely that at least some were purchased by Cornelius Gurlitt's father, thus making him the rightful owner.

One painting, by Gustave Courbet, was auctioned off – presumably to Gurlitt senior – as late as 1949. Hoffmann said that determining which of the works have to be returned to the descendants of their rightful owners could take a long time.

The Bavarian authorities are now facing criticism for keeping their discovery secret for more than a year – a charge that also extends to chancellor Angela Merkel, who learned of the discovery a few months ago, raising the question of why potential rightful owners were not contacted immediately.

At the press conference, the authorities rejected such criticism, emphasising that research into what works they had found and who they legally belonged to would take a long time. Chief prosecutor Nemetz claimed that the publication of the Focus article had been "counter-productive" and possibly made the works less safe.

"We don't want to hang on to these works. Nor were we planning to put them up in our offices", he insisted.

There were no plans to put the pieces online, he said, as this may not be in the interest of the rightful owners. Instead, customs officials were hoping people with a claim to ownership would contact the authorities directly.

A number of museums and descendants of gallerists have already responded to the call. One gouache, "Lion Tamer" by Max Beckmann, which had been sold by Gurlitt to a Cologne auction house in 2011, had originally belonged to the Jewish art dealer and collector Alfred Flechtheim. Flechtheim descendants on Tuesdayyesterday announced that they would enquire if further pieces from their ancestor were in the possession of the Bavarian authorities.

A spokesperson of the Dresden State Art Collections also confirmed to the Guardian that they will be enquiring about some of the works.

Some journalists have been asking what would happen if the story of the art find of the century in fact turned out to be the art hoax of the century. Hoffmann stated that she had only properly examined 500 works and could therefore not comment on the entire collection. "With the works I have done research on, I am assuming that they are authentic works. But that's just my personal assessment."

Die Welt newspaper suggested that "nothing will be the same" after the discovery. Art history may become "more colourful", but above all there will need to be an investigation into the conspiracy of silence amongst collectors, "who occasionally opened Gurlitt a door to the market but never asked any questions".

In an editorial in Süddeutsche Zeitung, arts editor Thomas Steinfeld said that the tale of the treasures made for "a great adventure story", but would also bring up the ghosts of the past: here was another reminder of "the crimes against Jewish artists, dealers and collectors that won't go away".

The Gurlitt case could represent nothing less than "the final charge of the story of the Third Reich against the gradual forgetting of individual lives and fates".