Report of Nazi-Looted Trove Puts Art World in an Uproar 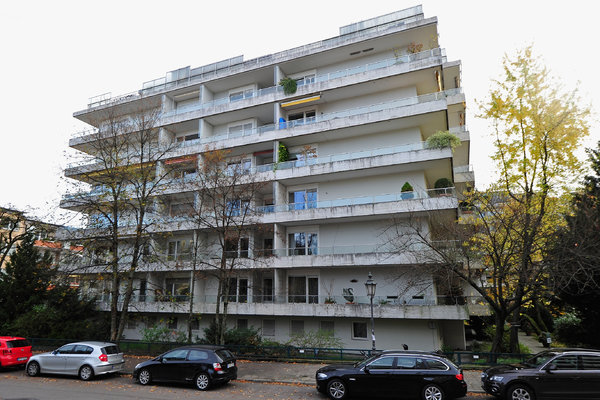 The Munich apartment building where the authorities were said to have found about 1,400 works of art that were confiscated under the Nazis or sold cheaply by owners trying to flee Hitler.

BERLIN — There was no hint that the older man who called a couple of years back about selling a picture could be sitting on an unimaginable trove of art confiscated or banned by the Nazis. When the proffered work, “Lion Tamer” by the German artist Max Beckmann, was collected, the seller seemed to be a proper gentleman in Munich dispensing with a lone, dusty art gem at the end of his life.

When he learned on Monday that the Beckmann seller, Cornelius Gurlitt, now 80, had reportedly sat on hundreds of works, including art by Picasso and Matisse, that were confiscated under the Nazis or sold cheaply by owners desperate to flee Hitler, Mr. Feddersen was amazed. “Imagine!” he said, envisaging seeing and selling such a collection.

But even before the Beckmann was sold, the Bavarian authorities swooped in on Mr. Gurlitt’s home to seize the rest of his treasure, according to the newsmagazine Focus: about 1,500 works estimated to be worth $1.4 billion. Focus said the works were seized after the police and customs officials entered Mr. Gurlitt’s home in Munich in spring 2011.

If confirmed, the discovery would be one of the biggest finds of vanished art in years. But word of it left almost equally big questions unanswered: Why did the German authorities let more than two years pass before such a sizable find was disclosed? What will become of the recovered works of art? Did Mr. Gurlitt continue to make sales even after the raid? And where is he today?

There are no reports that Mr. Gurlitt has been detained or charged, and questions about the history of the artworks, including whether they were confiscated or subject to a forced or voluntary sale, would determine whether a current sale or auction would be judged legitimate.

Since news of the find was first reported Sunday, the German authorities have come under fierce criticism in the art world as to why they did not make the discovery public.

Even on Monday, Bavarian and federal German officials who knew of the spectacular 2011 raid remained quiet. The German government’s only comment, from a spokesman, Steffen Seibert, was that it was aware of the case. However, the German authorities scheduled a news conference for Tuesday.

“They should have come out with this list pronto,” said Jonathan Petropoulos, the author of “The Faustian Bargain: The Art World in Nazi Germany.”

“That’s the way that restitution works,” Mr. Petropoulos added, calling it “unconscionable” that the authorities “sat on the trove for two and a half years,” particularly because it appeared to be an exceptionally large find.

The trail to the artworks, the magazine said, stemmed from an incident in September 2010, when Bavarian customs officials on a train to Germany from Switzerland became suspicious after finding Mr. Gurlitt carrying €9,000, or about $12,150, in crisp €500 notes.

The inquiries spurred by the money eventually led investigators to the apartment in Munich, the magazine said, reporting that Mr. Gurlitt had apparently lived there for decades, selling off pictures as needed over the years, to judge by empty frames found in his home. Emma Bahlmann, an employee of the Cologne auction house that sold the Beckmann work, said she went to an apartment with Mr. Gurlitt but saw no evidence of other artworks as she took the Beckmann off the wall.

The hundreds of works found in the Munich apartment reported to have been raided by authorities — including paintings but also many graphics and even an engraving by Albrecht Dürer, the German Renaissance artist — were taken to a customs facility near Munich for storage, Focus said. Meike Hoffmann, an art historian at an institute specializing in Nazi-confiscated art at the Free University in Berlin, was engaged to go through the discovered works.

Ms. Hoffmann declined to talk to reporters on Sunday or Monday about what she described in an email as “this case.”

But a video of a conference in September, posted on the institute’s website, showed her saying that her institute would soon be doing more work associated with Hildebrand Gurlitt, Cornelius Gurlitt’s father. The elder Mr. Gurlitt had trouble with the Nazis because he was deemed a quarter Jewish under the Nuremberg race laws, and he was dismissed from two museum posts. Yet he was also one of the few Germans granted permission by Joseph Goebbels, Hitler’s propaganda chief, to sell confiscated art. Sales to foreign buyers were meant to fill Nazi coffers, but art historians have documented many sales in Germany, as well as proceeds pocketed by the dealers involved.

“The research institute has had comprehensive material from private ownership put at its disposal,” Ms. Hoffmann said at the meeting. The materials “were completely unknown till now and will bring much to light.”

Hildebrand Gurlitt was detained and questioned by Americans investigating art looting just after the war ended in May 1945, Mr. Petropoulos said. The elder Mr. Gurlitt, who had an apartment in Dresden during the war, is said to have told the authorities that his collection burned in the bombing of that city in February 1945.

The German authorities have established several offices aimed at assisting in finding out the complex provenance of artworks that were seized by the Nazis or by invading Soviet troops at the end of World War II, and that were then sold off cheaply but according to legal formalities, or that simply disappeared in the chaos.

Any claims that do arise from the Gurlitt case are likely to take years to sort out. German museums whose collections were ravaged by the Nazis are as likely to submit claims as the heirs of Jewish collectors and dealers whose work was confiscated by the Nazis. The sale of the Beckmann painting by the Cologne auction house represented what Mr. Feddersen characterized as a relatively rare occasion in which Jewish heirs — in this case the heirs to Alfred Flechtheim, a gallery owner and dealer forced to flee Nazi Germany who died poor in London in 1937 — were able to share proceeds with the owner, Mr. Gurlitt.

The Galerie Kornfeld, a gallery in Bern, Switzerland, reported by Focus to have been the source of the cash found on Mr. Gurlitt on the train in 2010, denied having any dealings with him since 1990. Back then, the Galerie Kornfeld said in a statement, Mr. Gurlitt got 38,250 Swiss francs from selling works on paper by artists whose work was confiscated by the Nazis in 1937 as “degenerate.”

Hildebrand Gurlitt had acquired the works his son sold in 1990 “for cheap money in the years after 1938,” the Kornfeld gallery’s statement said. Cornelius Gurlitt never declared that he inherited the works upon the death of his mother, Helene, in 1967, the gallery said. (Hildebrand Gurlitt died in a traffic accident in 1956.)

The Bern gallery said Eberhard Kornfeld, who runs the gallery, was not available to speak to a reporter by phone. His gallery’s statement did not provide details of past dealings with Mr. Gurlitt, but emphasized how carefully one must distinguish between confiscated art and art that was acquired legally, even if the acquisition now seems to have been strange or made under duress. These works “are freely available for purchase to this day,” the statement said.

Mr. Kornfeld was recently portrayed as dealing in art looted from Jews in a proceeding that made its way to the United States Supreme Court, which declined to hear the case. He has denied the allegations.

His gallery’s statement said: “Cornelius Gurlitt’s statement to customs authorities in 2010 that the money came from business dealings with the Galerie Kornfeld in Bern is not accurate. The last sales date back to 1990.”

The gallery indicated, however, that its business with Mr. Gurlitt was mutually satisfying. For 16 years after those last dealings, Cornelius Gurlitt regularly received mailed catalogs from Kornfeld, sent to his Munich address. Only after 2006 were they returned, the gallery said, with a stamp indicating “Reception refused” or “Undeliverable.”