Hunt on for second cache of art stolen by the Nazis

THE hunt is on in Germany for a second secret cache of looted Nazi-era paintings after masterpieces worth close to a billion pounds were found in a squalid Munich flat. 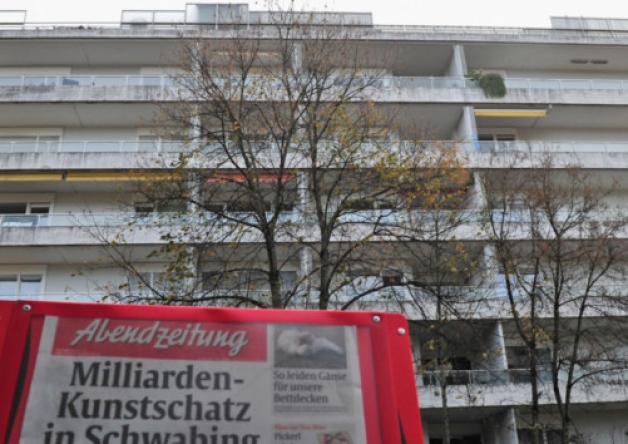 The first paintings were reportedly found in this Munich apartment block. Picture: Getty

Investigators in the German customs and police believe Cornelius Gurlitt has another hideaway where he has stashed yet more artworks collected by his late father.

Gurlitt, 80, sold a masterpiece called The Lion Tamer by Max Beckmann two months after his haul of treasures from collectors across Europe was found behind stacks of out-of-date food in the apartment owned by his mother.

The painting was sold by the Cologne auction house of Lempertz on 2 December, 2011 – two months after his clandestine art gallery was seized. “He has more,” said a customs source. “But just where… that is the puzzle.”

Investigators are also trying to discover the bank account in Switzerland that Gurlitt has lodged under another name – and in which hundreds of millions of pounds could reside.

Gurlitt hived off some of his father’s paintings after the war, many of them in Switzerland or to auction houses where no-one questioned where they had come from.

The Lempertz salesroom knew that The Lion Tamer was classified as “missing war art” – but sold it anyway for close to £750,000. Since then, Gurlitt himself has vanished from the apartment in the Munich suburb of Schwabing where he stored some of the most beautiful pieces of art lost to history.

Under investigation for tax evasion and – possibly – money laundering, he has not been arrested.

The artworks, including pieces by Renoir, Picasso, Chagall and Matisse, were found stacked up behind a wall of canned beans, frankfurters and boxes of noodles in the apartment rented in the name of his late mother, Elena, who died in 1967.

The flat was raided by customs two years ago after Gurlitt was stopped on a train travelling from Switzerland with 9,000 euros in a paper envelope bearing the name of a Swiss bank.

It was the catalyst for an investigation which will end up in the history books. Official checks showed that he had no social security number, no computer, no mobile phone, no doctor, no dentist, no insurance policies, no social security claims, no wife and no job.

Officials have not identified most of the paintings, sketches and lithographs in his possession. But it is known that a series are by the impressionist Franz Marc. One of them – Die Blauen Pferde am Strand, or The Blue Horses on the Beach – could be worth as much as £40 million at auction. Another is a hitherto unknown self-portrait by Otto Dix, the celebrated painter from the post-First World War Weimar Republic whose images of grotesquely mutilated German soldiers from the trenches enraged Hitler.

The artwork was collected by Gurlitt’s father, Hildebrand, who was recognised in Nazi Germany as a pre-eminent authority on modern art and as one of the great collectors of his age. Originally despised by the Nazis – because of his love for modern art that Hitler labelled “degenerate”, and because his grandmother was Jewish – he nevertheless became a key player in the regime’s scheme to part prominent Jews from their artistic wealth.

Hildebrand was one of four art dealers charged by Josef Goebbels, the Nazi regime’s propaganda minister, with turning “degenerate art into panzers” for the Reich. He not only hawked the regime’s plunder from museums and galleries, but also bought artworks from Jews at knock-down prices so they could escape Nazi Germany.