Authorities discovered a trove of about 1,500 missing works confiscated by the Nazis in the trash-filled Munich apartment of an octogenarian German, in one of the most spectacular discoveries of lost art since the war. 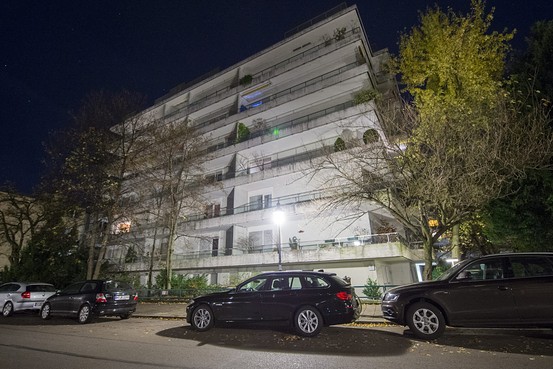 Cars are parked outside the apartment building where 1,500 artworks were reportedly found in Munich. European Pressphoto Agency

BERLIN—German authorities discovered a trove of about 1,500 missing works confiscated by the Nazis in the trash-filled Munich apartment of an octogenarian German, in one of the most spectacular discoveries of lost art since the war.

The works, by artists including Picasso, Matisse and Chagall, among others, would be worth about €1 billion ($1.35 billion) on the open market, according to a preliminary analysis for authorities undertaken by an expert at Berlin’s Free University.

German customs officials found the art in the spring of 2011 and have been trying to determine is provenance and value, according to German weekly Focus magazine, which, on Sunday, was the first to report the find.

The apartment where the art was found belongs to the son of a long-deceased Nazi art dealer, the magazine reported. The man, identified by the magazine as Cornelius Gurlitt, is under investigation for tax evasion, but it is unclear if he could also face other charges as well. Mr. Gurlitt couldn’t be reached for comment. A spokesman for the prosecutor’s office declined to comment.

Mr. Gurlitt’s father, Hildebrand, is known to have worked with the Nazis in the 1930s and 1940s on a campaign to rid German museums and private collections, many of them owned by Jews, of works the government considered to be “degenerate.”

It is unclear why German officials have, prior to Focus’s scoop, kept quiet for so long about the case. A spokesman for the district attorney in the city of Augsburg, which is handling the probe, said the office didn’t comment on ongoing investigations. A spokesman for the customs office in Munich declined to comment.

Chancellor Angela Merkel’s office was informed of the case months ago and has been assisting investigators in finding experts to evaluate the works, her spokesman said. Berlin’s Free University, which is assisting in evaluating the art, acknowledged its role but said in a statement that it couldn’t comment further.

German customs officials stumbled onto the case by chance in 2010, following a routine check of the 80-year-old man’s belongings on a train from Switzerland to Munich, according to Focus. During the check, they found a large sum of cash that prompted them to investigate him further. Months later, in the spring of 2011, authorities discovered the trove in his Munich apartment.

Though German authorities confiscated the works, which had been stored in trash-strewn rooms amid decades-old canned food, Mr. Gurlitt managed to sell at least one more work at auction after the discovery, according to the Cologne-based boutique auction house Lempertz that managed the sale.

Mr. Gurlitt approached Lempertz after the vast majority of his works were confiscated, with the “Lion Tamer,” a work by Max Beckmann which he had kept hidden from the German government’s raid several weeks before, according to the auction house.

“He said his mother had given him the work,” says Carsten Felgner, the provenance researcher at Lempertz who worked on the sale.

As is common in potentially thorny cases involving work acquired during World War II, Mr. Felgner contacted the family of Alfred Flechtheim, the work’s original owner who was a prominent collector. Given the uncertainty over who had a legal claim to the work, the auction house reached a deal to split the profits of the €864,000 Beckmann between the Flechtheim family, Mr. Gurlitt, and the auction house itself, according to Mr. Felgner.

A person who coordinated with Mr. Gurlitt on the sale at Lempertz described him as “friendly and charming” and said no one at the auction house “suspected a thing.” An employee who visited Mr. Gurlitt’s house didn’t see anything out of the ordinary in his residence.

Auction managers were surprised to find that the Mr. Gurlitt was under investigation.

“No one from the government ever came to us or alerted us about him. What does it say about the federal prosecutors that they didn’t feel the need to alert the auction houses?” said Mr. Felgner.