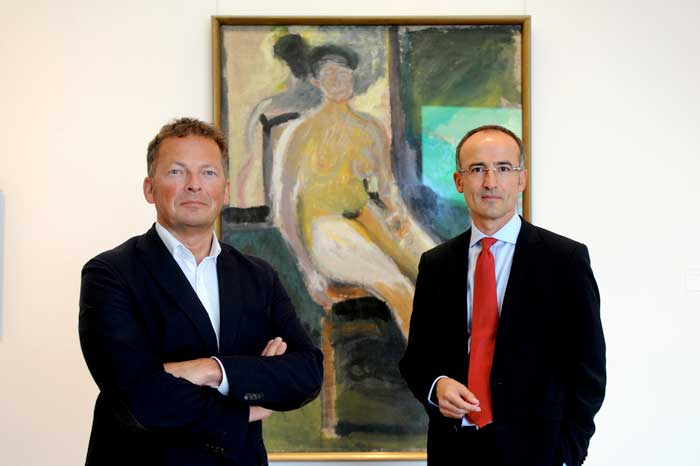 Tobias Natter (right), resigned as director of the Leopold Museum, Vienna, after its managing director Peter Weinhäupl, was appointed as the chairman of the controversial new Gustav Klimt Foundation

The director of the Leopold Museum in Vienna, Tobias Natter, resigned in protest from his position on Monday. His decision came after Peter Weinhäupl, the museum’s managing director, was last month appointed as the chairman of the controversial new Gustav Klimt Foundation, a body linked to the estate of Gustav Ucicky, a Nazi propaganda film-maker and the illegitimate son of Gustav Klimt. Weinhäupl’s partner Sandra Tretter, who worked for the Leopold Museum for many years, and his brother also have positions on the foundation’s board.

“For a long time the Leopold Museum has been under these dark clouds [the Nazi looted art debate], we were the looted art museum par excellence. But in the last few years we have done much to improve this public perception and it is therefore our responsibility to be extremely thoughtful and considerate in these matters,” Natter says. “To allow such a close relationship with [the Klimt-Ucicky] foundation, especially without any discussion, is unacceptable.” After learning of Weinhäupl’s appointment through the Austrian media, Natter protested to the museum’s board. But it decided to accept the situation, leading Natter to step down. “It was a very hard decision for me. I love the museum very much,” he said.

The Klimt Foundation was set up by Ucicky’s 93-year-old widow Ursula in September to “preserve and disseminate Gustav Klimt's legacy,” according to its website. The foundation owns four paintings and ten drawings by Klimt, one of which, Portrait of Gertrud Loew, 1902, has a disputed provenance. Ucicky’s ties to the Nazis, which some believe helped him acquire Klimt works at lower prices, has cast a shadow over the foundation’s establishment. Elisabeth Leopold, the widow of Rudolf Leopold, who supported Natter in front of the board, said in a statement: “I don’t want to have anything to do with this Klimt Foundation. It bothers me that we are once again brought into contact with stolen art. It does the atmosphere around our museum no good.”