Should the National Gallery seize a Klimt portrait stolen by the Nazis? 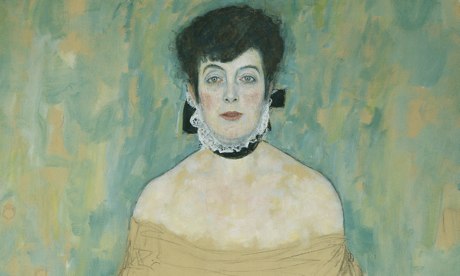 A lawyer who has been involved in the restitution of art stolen by the Nazis to its former owners has called on the National Gallery not to return a painting in its exhibition Facing the Modern: The Portrait in Vienna 1900 to the Austrian gallery that loaned it.

Gustav Klimt's unfinished portrait of Amalie Zuckerkandl was illegally seized from Jewish collector Ferdinand Bloch-Bauer, says lawyer E Randol Schoenberg. It must not go back to Austria. Although the painting is now owned by the Belvedere Gallery in Vienna, Britain's National Gallery should seize it and help initiate the restitution process.

This is clearly a daft request. If the National did any such thing it could never put on an exhibition again, because shows rely on loans. Museums have to indemnify foreign lenders and provide all manner of reassurance that works can be lent safely.

Still, the National Gallery has itself benefited from restitution. In 2002, it bought a beautiful Renaissance painting by Gentile Bellini that previously hung in Vienna's Kunsthistorisches Museum. The National bought it from its rightful owners, the heirs of Erich Lederer, after they won a restitution case.

Lederer's heirs have now filed a claim for one of the most famous works of art in Vienna – no less a glory than Klimt's Beethoven Frieze. I am shocked that this dreamlike mural has such a troubling history. It is one of Vienna's greatest treasures, a monument to the city's fin de siècle golden age. But although it was returned to its rightful owner Erich Lederer after the war, he was apparently only granted an export licence for other works on the condition that he sold the Beethoven Frieze to the Austrian government at a knockdown price.

It's sad to see Vienna stripped of the art that tells its story – a story that is profoundly Jewish. Where does the Beethoven Frieze belong but in the city it was made? I think restitution is a less clearcut case than it seems. It is hard to see how selling the Frieze at an eye-popping price on today's mad art market would serve history or understanding. But then I think about the horrorible history behind these art transactions.

I recently watched Leni Riefenstahl's film Olympia, about the 1936 Berlin Olympics. In the opening ceremony, the entire Austrian team gives a Nazi salute to Hitler – this was two years before the unification of Germany and Austria. The ambiguities of Hitler's Anschluss with Austria – was it conquest or consensual union? – allowed Austria to kid itself and others about its role in the war. (You might call it The Sound of Music delusion.)

The shocking story of how Erich Lederer seems to have been forced by the state to sell Klimt's masterpiece for a bargain price sounds like residual antisemitism in action. It really does look like the Beethoven Frieze should be restituted – and if it ends up in Los Angeles or New York, then Austria only has its own past to blame. As for the painting lent to the National Gallery, it has to go back to Vienna – for now.