A US court is being called on to deal with a Czech Holocaust restitution claim for the first time, in what has been described as a landmark case 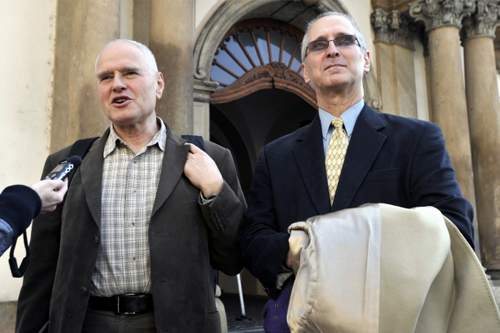 Michael Klepetář, an heir to the Popper collection, with American Jewish restitution campaigner Ed Fagan (right) in front of the National Gallery in Prague

A Czech descendent of a Jewish family who perished in the Holocaust during WWII has lodged a complaint in a US court against the Czech state for the return of an art collection that was confiscated by the Nazis — and some of which is now in the hands of the Czech National Gallery.

The legal case calling for the return of the Popper art collection was lodged with the district court of Fort Lauderdale, South Florida, on April 19, by  Michal Klepetář, the grand-nephew of Richard Popper, an art collector and patron who lived in the second city of Brno. He was deported with his wife and daughter to the Łódź ghetto in 1941 and they are thought to have been killed there in 1942. The case is the first of its kind where a US court has been asked to intervene in a Czech restitution issue.

Klepetář has taken the step of seeking justice from a US court, along with American Jewish restitution campaigner Ed Fagan, because he says his attempts to get justice from the Czech system have been blocked and legal proceedings in the Czech courts run their course.

“We have exhausted all the legal possibilities in the Czech Republic,” the man in his mid 60s said during a news conference on Friday. The more than decade old local legal battle includes three approaches to the Czech Republic’s highest court, the Constitutional Court, as well as a series of lower courts.

‘We have exhausted all the legal possibilities in the Czech Republic.’

Klepetář says that between 43 and 50 paintings from the family collection of around 130 works of art and objects are now found in the possession of the Czech National Gallery and Museum of Decorative Arts, with eight of the objects listed on the National Gallery’s English website as originating with the Popper collection. The Czech state has, however, contributed to frustrating Klepetář’s restitution claims by refusing to give full details of the collection in its possession or explain where some of the works may have disappeared, he says.

“They have hidden three reports [on the collection] from us — in 2000, 2001, and 2005 — and they will not give us those reports or make them available to me. But they will,” said Fagan, who has bought a stake in the known and missing collection. Known for pursuing Jewish Holocaust claims in a series of countries, including a landmark case against Swiss banks for Jewish property lodged there before and during WWII, Fagan stressed that he is “Klepetář’s partner not his lawyer.”

Klepetář‘s basic case is based on a Czech court that finally recognized him and his brother as the rightful heirs to real estate in Brno, south Moravia, that belonged to Richard Popper. But the same recognition has been refused for the works of art.

According to Tomáš Jelínek, the former chairman of the Jewish community in Prague, one of the reasons for this is a Czech law dating from 2000 relating to works of art confiscated by the Nazis between September 29, 1938 (the date when the Third Reich occupied the Sudeten territories of former Czechoslovakia) and May 4, 1945 (the end of WWII in Europe).

While on the one hand opening up restitution claims for Czech property to non-Czechs, many of whom fled abroad, the law also tightened the rules by only allowing direct descendents the right to make claims. Fagan says this runs counter to Czech international promises.

Success in the US courts, where Fagan and Klepetář are demanding the return of the collection or threatening to sue the Czech state for $50 million, will, Jelínek says, probably open the flood gates to a series of similar claims against Prague that have formerly been deterred by the legal obstacles put in the way and impression given since the 1990s that individual Holocaust restitution claims will not succeed in the Czech Republic. ‘I suspect that there are dozens of similar claims out there. ... It will act as a precedent.’

“I suspect that there are dozens of similar claims out there,” Jelínek commented. “We believe that other demands will come forward when they hear about this. It will act as a precedent.” He cited an art collection built by the family of the Koh-I-Noor Waldes button-producing company and the property of the current Russian embassy in Prague as examples where the Florida case could provide a lead.

The Czech-American legal action in the US, lodged on International Holocaust Memorial Day, has already taken inspiration from a Hungarian Holocaust claim lodged in the US concerning one of the country’s largest collection of impressionist paintings which taken from its Jewish owners during WWII and never returned. “The court has said that 90 percent of that property should be returned,” Fagan told Czech Position.

Fagan said he expected a judgement from the Florida court on the basics of the Czech restitution claim by the end of the year. “We want a rapid ruling to safeguard the paintings; we know about where some of them are but not the rest,” Fagan added. “If the decision is in our favor and we do not get the paintings back, we will call for Czech property to be seized, a Czech Airways airplane in the US or some state property there.”

Fagan argues that the Klepetář case is about a basic matter of principle. “The principle is that if you get property from theft this does not give you the right to that property. You are an accessory to a theft,” he said. “Mr. Klepetář’s claim is that ‘you, the Czech government, are successors of a theft. It was stolen from my [Klepetář’s ] great uncle.’ It was stolen as part of a crime against humanity and the only reason that he [Richard Popper] was not able to come forward to claim it was that he was executed in Łódź,” he added.

‘The Czech government will have to explain what is happening and why the US is giving $150,000 to a program that doesn’t do shit.’

As well as the court case, Fagan and Jelínek say the Czech government will come under pressure from Washington for failing to deal with Holocaust restitution claims such as Klepetář’s.

Fagan says the Czech government pledged to deal with such cases when its signed up to the so-called Terezín declaration in 2009, named after an international conference calling for a fast settlement of Holocaust claims for survivors and their descendent hosted by the Czech Republic. He says the declaration also established US funding for the Czech government to create a program that would deal with such claims.

“The Czech government will have to explain what is happening and why the US is giving $150,000 to a program that doesn’t do shit. We do not need more museums or studies or research. We do not want more institutions or employees. What we need is for Michal Klepetář to be given his paintings back,” Fagan said. A US delegation should be visiting the Czech Republic in November to check up on how the Terezín declaration is being implemented, he added.

Fagan also drew a parallel with the Czech government’s willingness to push through a restitution settlement, primarily with the Roman Catholic church but also other religious groups and the official bodies representing the Czech Jewish community, for property confiscated under the communist regime but is dragging its feet on individual Holocaust settlements.

Czech Prime Minister Petr Nečas (Civic Democrat, ODS) wrote in a letter to Michal Klepetář in March 2011 that no reopening of the restitution process was possible because it would amount to an “intervention regarding the legal certainty and stability of property relations in an already functioning democratic system.”