Clooney finds the art, adventure of war in 'Monuments Men'

WWII thriller, written and produced with Grant Heslov, is based on Robert Edsel's book. 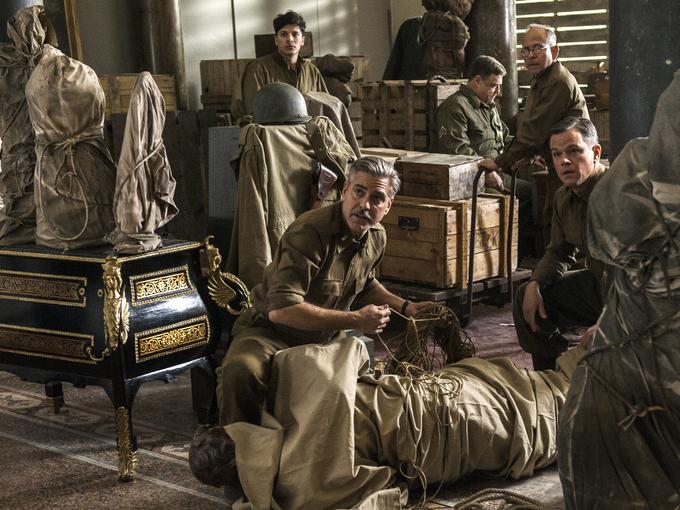 George Clooney and Grant Heslov were looking for something a little more lighthearted after plumbing Washington's seedier political depths in 2011's The Ides of March.

Their answer: a footrace with Hitler.

So goes the intriguing theme of The Monuments Men (due Dec. 18), a World War II thriller directed by Clooney and written and produced with Heslov.

Based on the Robert Edsel book about a real platoon tasked with going behind enemy lines to retrieve art masterpieces stolen by the Nazis, Monuments Men follows the museum directors, curators and art historians behind the mission.

Despite the Nazi backdrop, Clooney says, the film is an adventure and a change in tempo for the team, which produced last year's best-picture Oscar winner, Argo.

"Grant and I were looking to do a film that was less cynical than a lot of the films we do," says Clooney, who plays Lt. Commander George Stout, one of the nation's first art conservationists.

"Grant had read the book at the airport," Clooney says. "He gave it to me. We went into Sony and pitched it and got greenlit right there. The story was just so compelling."

Clooney says the film offered something rare in the canon of World War II films: an untold story.

Hitler "perpetrated the biggest art heist in the history of the world," he says. "And almost got away with it. It's been a long time (since) you could find a new story about World War II."

Heslov says that while the pair wanted a break from their past work, those projects, which include 2005's Good Night, and Good Luck, opened the door to getting an A-list cast, composed mainly of friends. Clooney's co-stars include Matt Damon, Cate Blanchett, Bill Murray, John Goodman and The Artist's Jean Dujardin.

"When we write movies now, we usually have specific friends in mind," Heslov says. "It's nice to be able to call them and say, 'Hey, we have a new movie. Want to come spend a few months with us?' Usually, it works out."

Clooney, however, concedes that the men had to brush up on their knowledge of art, which he says began at zilch.

"I don't own any artwork except paintings from my godkids," he says. "Which I'm convinced are priceless."