Early European Painting of America Is Sold to Rijksmuseum

AMSTERDAM – The Rijksmuseum here has acquired one of the earliest known depictions of America painted in the history of Western art, Jan Mostaert’s “Discovery of America.” Painted some time between 1525 and 1540, it is an imagined scene of conquest, depicting Spanish invaders in military garb aiming cannons and rifles at a naked indigenous population, who fight back with bows and arrows. 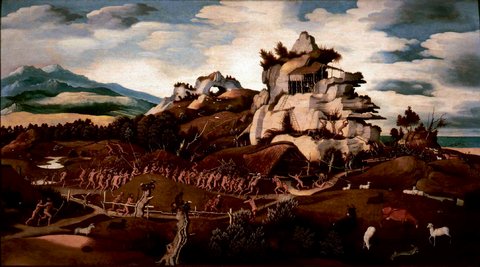 Jan Mostaert’s “Discovery of America,” also known as “Episode From the Conquest of America.”

The work, also known as “Episode From the Conquest of America,” was among 202 paintings that were returned to Marei von Saher, the daughter-in-law of Jacques Goudstikker, a Jewish Dutch art dealer between the wars whose collection was looted by the Nazis. After the war, the painting was hung in the Frans Hals Museum in Haarlem, until legal action by Goudstikker’s heirs forced them to return it to the family in 2006.

Ms. von Saher was approached by the Rijksmuseum about buying the painting earlier this year, said Hugo Nathan of the Simon Dickinson Gallery in New York and London, which handled the sale. It brought the work to the European Fine Art Fair in Maastricht in March, with an asking price of $14 million.

“It’s a picture that a lot of people were interested in both in North and South America because of it being such an important historical picture,” said Mr. Nathan, “but Mostaert is arguably the most important early Dutch painter, as opposed to being a Flemish master, and the Rijksmuseum was always hoping to secure it for the Dutch nation.”