Doyenne of Russia's art world ousted from Pushkin Museum at 91 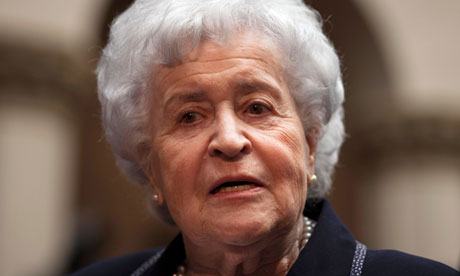 Irina Antonova had criticised opponents of the revivial of the State Museum of New Western Art as 'adhering to a decree of Stalin'. Photograph: Alexander Zemlianichenko/AP

Irina Antonova came to work at Moscow's renowned Pushkin Museum the year the second world war ended. She built herself up to director, brought the Mona Lisa to the Soviet Union and outlasted every leader from Stalin to Yeltsin to become the doyenne of Russia's art world.

On Monday, Antonova was unceremoniously let go. Some blamed her age – at 91, she has been director of the museum, which houses a major collection of 19th and 20th century European art, since 1961.

But she remains as sharp as when she was challenging Soviet authorities to display the work she loved so much, from Marc Chagall to Wassily Kandinsky, considered traitors for fleeing the motherland.

Instead, it appears Antonova has fallen victim to a scandal that has shaken Russia's art world, pitting Moscow against St Petersburg, the Pushkin against the Hermitage and forcing all to face a history that many would rather forget.

It began in April, when Antonova appealed to Vladimir Putin during his annual televised call-in show, hoping to get his support for a pet project that would revive a major museum of western art destroyed by Josef Stalin in 1948 as the cold war raced ahead.

The prized collections of the Pushkin and the Hermitage were partly borne of the destruction of the State Museum of New Western Art, with dozens of works divided between them, including paintings by Matisse, Picasso, Cézanne and Van Gogh gathered by the Tsarist-era collectors Sergei Shchukin and Ivan Morozov.

Reviving the museum has long been a goal of Antonova's, who has said she visited it daily in her youth. Much less keen on the idea is the Hermitage, which has refused to let its paintings go.

Antonova's public raising of the issue launched the closest thing the art world has to all-out war. She and Mikhail Piotrovsky, the director of the Hermitage, took to the press to argue their cases. The state intervened, proposing an online "virtual museum" so the issue could be put to rest. Antonova refused. In May, Putin's spokesman said the president would not get involved but "the chances of creating such a museum fall significantly" considering Piotrovsky's disapproval.

Antonova continued to lash out, telling AFP last month: "Those who are against [re-establishing the museum] are adhering to a decree of Stalin."

On Monday Vladimir Medinsky, Russia's widely reviled culture minister, announced at the Pushkin's vaunted halls that Antonova would be leaving her post.

"Irina Alexandrovna is a legendary person, who made the Pushkin Museum legendary," he said. "There are no longer such people in the world."

He said she would move to the ceremonial post of president of the museum. Antonova will be replaced by Marina Loshak, a respected curator who heads the Manezh exhibition space near the Kremlin.

Antonova told the crowd: "I love the museum and I'm grateful to the museum for my life and thankful to all of you with whom I worked, in my opinion rather successfully, for so many years."

The announcement was a surprise. Sources say Antonova only recently renewed her five-year contract to run the museum and appeared to have no plans to stand down.

Russia's political spin machine quickly activated to pre-empt criticism. Yelena Drapeko, deputy head of the Duma's culture committee, told the state-owned RIA-Novosti news agency that Antonova had been let go because of her age. "I doubt they wanted to insult her," she said.

Eduard Bagirov, a pop writer who is a very public supporter of Putin, tweeted: "About Antonova and the Pushkin Museum: guys, to hold a directorial post for 52 years – that's beyond the realm of good and evil."

Others praised Antonova while welcoming the new wind blowing through Moscow's cultural scene. "Entire eras have been lived through her," Olga Sviblova, a leading Russian curator, said, highlighting Antonova's "strength, openness and bravery". "She had to come to arrangements with every era – Stalin, Khrushchev – and she always achieved it. She always stuck to the line she considered important and that allowed her to open windows that no one but her could have opened."