MOSCOW – A veteran arts curator who has managed one of Russia’s largest art museums for over half a century resigned on Monday following a turf war over art once banned by Joseph Stalin. 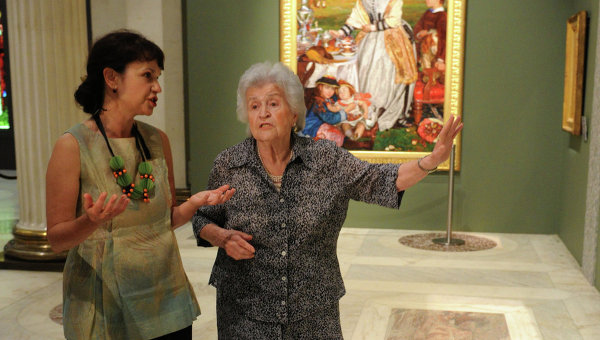 rina Antonova, 91, has headed Moscow’s Pushkin Fine Arts Museum since 1961. At its helm, she organized landmark exhibitions remembered by generations of Muscovites and presided over the museum’s transformation into one of the world’s largest art collections. The collection now comprises more than 500,000 exhibits, including works by Flemish masters, French impressionists, Van Gogh and Picasso.

Antonova has for years been lobbying for the re-establishment of the New Western Art Museum in Moscow that was closed down by Soviet dictator Joseph Stalin in 1948 amid a government-orchestrated campaign against modernist and “anti-proletarian” art. The museum had exhibited canvases by Monet, Van Gogh and Picasso that were mostly transferred to the State Hermitage Museum in St. Petersburg after it was shut down.

During a televised phone-in with President Vladimir Putin in April, Antonova urged him to reopen the museum. Putin agreed, but the State Hermitage’s management refused to hand the artworks over, while dozens of artists and intellectuals urged Putin to reverse his decision.

Antonova said Monday that she will stay on as the museum’s honorary president and named Marina Loshak as her successor. “I love the museum, I am thankful to the museum for my life in it,” Antonova told a news conference.

Antonova’s resignation also follows the recently reignited dispute between Russia and Germany over tens of thousands of masterpieces known in Russia as “trophy” art, which in Germany is considered “looted” art as it was removed by the Soviet army during and after World War II.

Berlin has for decades demanded that the art is returned, while Moscow called it compensation for the destruction and looting of Russian art by the invading Nazi army.

Last week this issue hit the headlines again when German Chancellor Angela Merkel reportedly refused to open an exhibition of Bronze Age art in St. Petersburg that included some “looted” items. After a media scandal over these reports, Putin and Merkel opened the exhibition together.

Along with thousands of other “looted” exhibits, the Pushkin museum houses the Gold of Troy – thousands of golden, silver and copper artifacts from ancient Troy discovered by pioneering archeologist Heinrich Schliemann in the 1870s and exhibited at Berlin’s Pergamon museum until 1945.