Duchess Portrait Missing Since WWII Returns to Her Heirs

An 18th-century oil portrait of a German duchess that was lost in Poland during World War II has returned 70 years later to Weimar, the city where it was first commissioned by Johann Wolfgang von Goethe.

Duchess Anna Amalia of Saxe-Weimar-Eisenach was portrayed as a lover of the arts by the artist Angelika Kauffmann in her Rome studio in 1789. The painting went missing from the duchess’s descendants’ palace in World War II, only to resurface in 2011 when a Polish consignor took it to Sotheby’s. 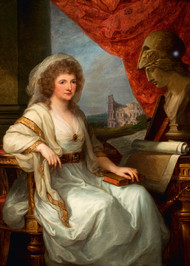 A 1789 portrait of Duchess Anna Amalia of Saxe-Weimar-Eisenach during a visit to Rome. Her descendants lost the portrait in World War II, and it was will be official returned to Weimar in a ceremony on June 24.

“Our identity is closely linked with this city, so this is where it had to come back to,” Michael Saxe-Weimar-Eisenach, the heir of the painting and a descendant of the grand ducal family, said at a ceremony at the Weimar palace. He has agreed to loan it permanently to the city.

Christoph von Berg, the lawyer who negotiated its return, said the painting is worth “hundreds of thousands” of euros, declining to name an exact figure. After its completion, it hung in the Roman House in Weimar, built under Goethe’s direction as a retreat for Anna Amalia’s son, Duke Carl August of Saxe-Weimar-Eisenach.

When the monarchy was overthrown in 1918, the Roman House reverted to the ownership of the State of Thuringia and the painting moved to the palace in Weimar, still then owned by the family. Later, the portrait was moved to a family residence in Silesia, now a part of Poland.

It disappeared during the turmoil of World War II, and only surfaced in 2011 when a Polish businessman and art collector, Piotr Buchner, took it to Sotheby’s (BID) in London to be auctioned.

A Sotheby’s employee spotted a listing for the painting on the German database lostart.de and reported its reappearance to Weimar city authorities.

“We will probably never know where the painting went after 1945,” Nina Buhne, a senior director at Sotheby’s said at the ceremony. “It is lucky that it didn’t end up in a Russian archive. And lucky that it ended up on the art market.”

Sotheby’s held on to the painting for as long as it took to reach agreement, von Berg said. Klassik Stiftung Weimar, the foundation that runs Weimar’s palaces and museums, contacted Buchner to negotiate a return. The agreement involved paying some compensation to Buchner, who also claimed legal ownership, von Berg said.

“We wanted to avoid expensive litigation in Britain,” von Berg said. “It was important to negotiate an agreement.”

Duchess Anna Amalia’s most famous bequest to Weimar was her beautiful library, which specializes in literature from around the year 1800. Destroyed by fire in 2004, it has since been restored and is open to the public.

Kauffmann, who became friends with the duchess during her sojourn in Rome, painted Anna Amalia surrounded by evidence of her devotion to the arts, including books, rolled up graphics and music. Behind her, a curtain is lifted to one side to reveal a view of the Colosseum.

Weimar plans to honor the painting with an exhibition at the Roman House next year.