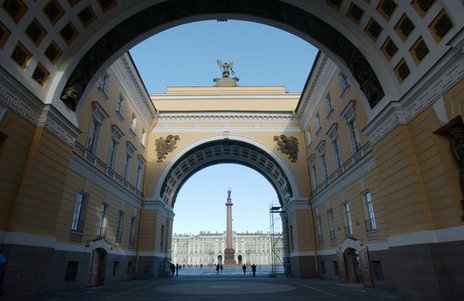 The new exhibition is being held at the prestigious Hermitage Museum

A fresh dispute over German art seized by the Soviet Union as war reparations threatens to overshadow Chancellor Angela Merkel's visit to Russia.

Mrs Merkel had been due to open a new exhibition jointly with President Vladimir Putin in St Petersburg, after an economic forum in the city.

But the Friday evening ceremony was cancelled at short notice.

It appears Mrs Merkel was planning to mention German claims in her speech and the Russian side objected.

News of the cancellation came just before Mrs Merkel's flight from Berlin to St Petersburg, where she is due to address the annual St Petersburg International Economic Forum.

The two countries are in dispute over whether works of art taken by Soviet forces in the last war should be returned to Germany, the BBC's Steve Evans reports from Berlin.

Nobody quite knows how much art was looted from German collections as the Soviet Army closed in on Berlin but it certainly runs into thousands of paintings and sculptures, our correspondent says.

One gallery alone in Berlin lost 441 pictures, including masterworks by Rubens and Caravaggio.

The new exhibition at the Hermitage Museum includes work previously in German museums.

The Russian position has in the past been that the works were paid for with the blood of Soviet soldiers, our correspondent says.

Russian officials have also pointed out that Napoleon's troops looted works from Russian collections, works which ended up in the Louvre.

Furthermore, Nazi forces destroyed or looted Russian art treasures during the invasion of the USSR.

Art taken from Nazi Germany has been shown in Moscow on several occasions in recent years such as a display at the Pushkin State Museum of Fine Arts in 2007 and a Moscow Museum of Architecture event in 2003.