The Russian president says he hopes the legal conflict over the collection will be resolved, but Brooklyn Chabad group disagrees 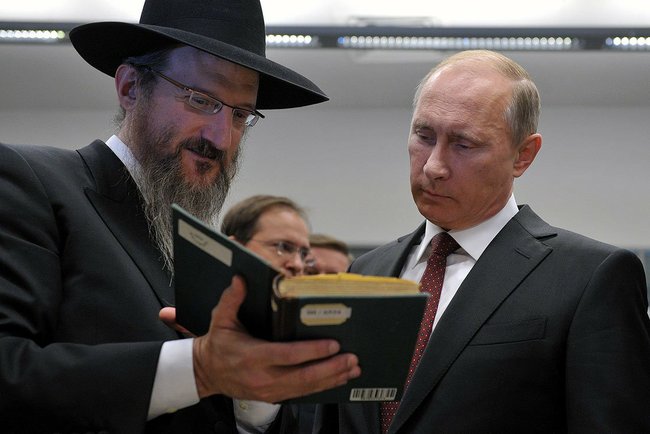 Putin with Russia's Chief Rabbi Berel Lazar during a visit to the Jewish Museum and Tolerance Centre. Photo: Presidential Press and Information Office

Russian president Vladimir Putin has officially handed over the first 500 of 4,500 books from the disputed Schneerson library to Moscow’s new Jewish Museum and Tolerance Center, and said he hopes that the legal wrangling over them “will be conclusively resolved”. Putin visited the museum on 13 June and spoke of the historic importance of Jewish people to Russia’s “multi-ethnic state”. He called the books a source of “eternal moral and ethical values that serve as the basis for any civilised society existing today”.

But the Russian president also made some questionable, off-the-cuff remarks about the role Jews had in creating the Soviet state. The comments have not been widely published in reports but are in the official Kremlin transcript of the visit.

“You know, I thought about something just now. The decision to nationalise this library was made by the first Soviet government, whose composition was 80% to 85% Jewish,” Putin said, adding that they persecuted all religious faiths on ideological grounds. “Thankfully, those ideological goggles and faulty ideological perceptions collapsed. And today, we are essentially returning these books to the Jewish community with a happy smile.”

The collection has been at the heart of a long-running legal case between the Chabad-Lubavitch movement, based in Brooklyn, and Russia. The group’s late, revered leader Rabbi Yosef Yitzchok Schneersohn was allowed to leave the Soviet Union in 1927 after an outcry over his arrest and death sentence. His books and manuscripts ended up in the Russian State Library and a military archive. Earlier this year, the Jewish group won a US court case that resulted in Russia being fined $50,000 a day for failing to return the collection.

The new Jewish Museum and Tolerance Center is run by Moscow’s Federation of Jewish Communities of Russia, which is known for supporting Putin. The fight over the ownership of the collection has frozen loans between American and Russian museums, but Putin’s assurances of an end to the conflict were dismissed by the Brooklyn group. In a statement, Agudas Chasidei Chabad of the US said that the move “does not satisfy Chabad’s religious requirements or remedy Russia’s unilateral seizure, retention and claimed ownership of these sacred books”.

The rest of the books are expected to be moved to the Moscow museum by the end of 2013. To avoid further restitution claims, a branch of the Russian State Library has been created at the museum, so that the actual ownership of the collection is not transferred to the Jewish community.

The museum is in a landmark Constructivist bus depot that housed Dasha Zhukova’s Garage Center for Contemporary Culture from 2008-2011. Zhukova’s partner, billionaire Roman Abramovich, chairs the federation’s board of trustees.