Rosenberg, who played a key role in the Holocaust, was hanged for crimes against humanity in 1946 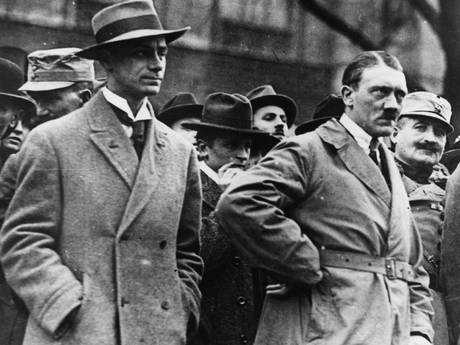 History’s account of the Third Reich and the extermination of millions of Jews in the Holocaust may have to undergo some late revisions upon the surfacing in America of 400 pages of the long-lost diaries of Alfred Rosenberg, a close confidant of Adolf Hitler and an architect of the Nazi genocide dubbed “the Final Solution”.

After years of dead ends, researchers have tracked the papers down to a home near Buffalo in New York. They will be formally unveiled this week by the US government in conjunction with the US Holocaust Memorial Museum, based in Washington.

According to a preliminary analysis, the writings both reveal new details of the internal machinations of the Nazi command and challenge some standing theories about the period.

Known to Second World War scholars simply as the Rosenberg diaries, their pages promise a priceless window into the private ruminations of their author, who was hanged after his conviction at the Nuremberg trials. Having been convicted of crimes against humanity, he was one of a dozen senior Nazi officials executed in October 1946.

The pages that have reportedly now been retrieved span the years between 1936 and the winter of 1944. Most of the passages are written in Rosenberg’s own handwriting, some on official Nazi stationery.

Scholarly debate about the pages, which include discussion of the planning for the mass extermination of Jews and other East Europeans, and their historical significance, is sure to be lively. “The documentation is of considerable importance for the study of the Nazi era, including the history of the Holocaust,” a first assessment of them prepared by the Holocaust Memorial Museum and seen by the Reuters news agency concludes.

The museum also signals controversy ahead. “A cursory content analysis indicates that the material sheds new light on a number of important issues relating to the Third Reich’s policy,” it says. “The diary will be an important source of information to historians that complements, and in part contradicts, already known documentation.”

Described in the pages are meetings between Rosenberg and Hitler as well as other top figures in the Reich, such as Heinrich Himmler and Hermann Goering. They reportedly also speak to tensions at the top of the Reich, for example when Rudolf Hess fled to Britain in 1941 and with regard to the looting of art and cultural artefacts throughout Europe, a programme of organised theft largely supervised by Rosenberg himself.

After being introduced as key evidence in the Nuremberg trials at the end of 1945, the Rosenberg diaries mysteriously vanished. It was long assumed they had been spirited out of Germany and to America by one of the prosecutors, Robert Kempner, who himself had fled the Nazis in the 1930s and had become an American.

After Kempner died in 1993, legal disputes over his papers raged for nearly 10 years between his children, his former secretary, the Holocaust museum and a local debris removal firm. Although thousands of historical documents were eventually recovered, when officials arrived to retrieve them from his home in 1999, they discovered that many thousands of pages were missing and the diary itself remained elusive.

Early this year, the Holocaust museum and an agent from Homeland Security Investigations attempted to find the missing diary pages. It appears they had been in the hands of Kempner’s former secretary who moved with them to the home of an academic near Buffalo.