April
Bloomberg 28 May 2013
By Catherine Hickley 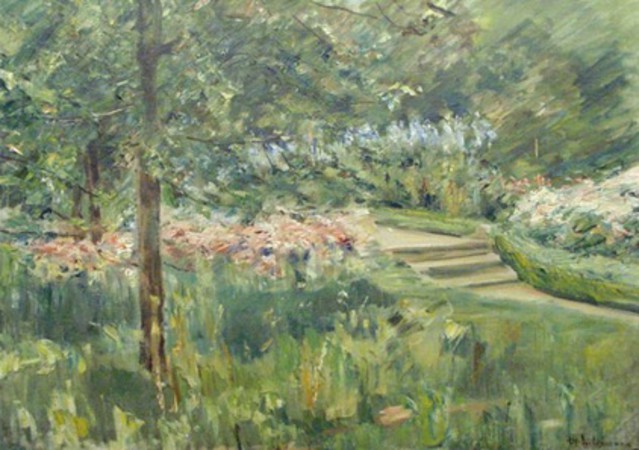 \
Garden in Wannsee (1923) by Max Liebermann was returned to the heir of Max Cassirer, a Jewish businessman persecuted by the Nazis. The painting was in the custody of the Israel Museum in Jerusalem, which said it has bought back the artwork from the heir.

The Israel Museum bought back a landscape by Max Liebermann after returning it to the heir of Max Cassirer, a Jewish businessman from whom the painting was looted by the Nazis more than 70 years ago.

“Garden in Wannsee” is the most important Liebermann landscape in its collection, the Jerusalem-based museum said in a statement sent by e-mail today. A photograph discovered in 2012 showed the painting as it was displayed in Cassirer’s Berlin home before the theft. Cassirer fled Nazi Germany in 1939, first to Switzerland and then to Britain, the museum said.

Seized by the Einsatzstab Reichsleiter Rosenberg, a Nazi art-confiscation unit, the 1923 landscape resurfaced at the end of the war and was handed to the Jewish Restitution Successor Organization. The Israel Museum showed it in its 2008 “Orphaned Art” exhibition featuring works looted during World War II and brought to Israel.

“The rightful restitution of works of art that were stolen or unwillingly sold during the Second World War is a challenge that many continue to face,” James Snyder, director of the Israel Museum, said in an e-mailed statement. “We do our best to be exemplary in the handling of restitution claims.”

Liebermann was a German-Jewish impressionist painter who was also persecuted by the Nazis. He was forced to resign as honorary president of the Prussian Academy of Arts after Adolf Hitler won power, and died isolated and embittered in 1935.

The Israel Museum has in its custody about 1,200 unclaimed works of art looted by the Nazis and handed to the Jewish Restitution Successor Organization, including pieces by Marc Chagall, Egon Schiele and Alfred Sisley, according to the museum’s website.

Works it has restituted in the past 15 years include Paul Klee’s “Veil Dance,” a drawing of dancers by Edgar Degas, and a Camille Pissarro painting of Boulevard Montmartre.