April
Bloomberg 23 May 2013
By Catherine Hickley 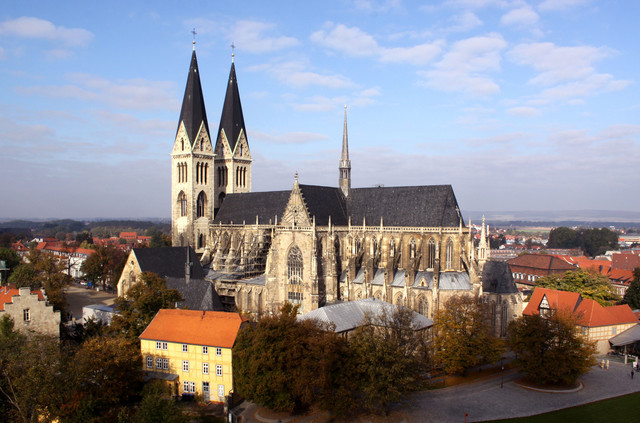 Halberstadt Cathedral, one of Germany's finest Gothic cathedrals. It serves as a location for George Clooney's film "The Monuments Men." Currently shooting, the film is due for release in the U.S. in December.


Sporting a neat gray mustache and faded jeans, George Clooney comments on the chill air as he strides through 800-year-old Halberstadt cathedral, checking all is set for the shoot.

“That hurts,” says Labusiak. Halberstadt is one of Germany’s finest Gothic cathedrals. Yet he says he’s excited. “It’s not every day George Clooney comes to Halberstadt to make a film,” he says.

Clooney, who flashes a smile and says “hi guys” as he sweeps past on his pre-shoot inspection, is directing and starring in “The Monuments Men.” The Los Angeles Times has reported that the budget is between $70 million and $80 million.

Other cast members include Cate Blanchett, Matt Damon, Bill Murray and Jean Dujardin, who won an Oscar for his performance in “The Artist.” “The Monuments Men” is scheduled for release in the U.S. on Dec. 18 by Sony Pictures.

The movie addresses the Western Allies’ efforts to protect heritage sites at risk in World War II and recover Nazi plunder. The script by Clooney and Grant Heslov is based on a 2009 non-fiction book called “The Monuments Men” by Robert Edsel with Bret Witter. Edsel interviewed surviving members of a joint U.S.-British military unit made up of museum directors, curators, artists, architects and archivists.

The Ghent Altarpiece, coveted by Adolf Hitler for his planned “Fuehrermuseum” in Linz, was one of hundreds of thousands of artworks stolen by the Nazis across occupied Europe. Edsel’s book describes how two members of the Monuments, Fine Arts and Archives unit recovered the altarpiece in 1945 from a salt-mine in Austria where it had been stashed for safekeeping, along with a trove of masterpieces such as Michelangelo’s “Bruges Madonna” and Vermeer’s “Art of Painting.”

Today, Thomas Labusiak has his own treasure to protect. As we take a tour of the movie crew’s trailers camped on the cathedral’s forecourt, he notices a diesel generator belching black smoke across the 13th-century portal.

“We just had it restored,” he tells two wired-up crew members, pointing to the elaborately sculpted facade. Within minutes, the generator is moved and apologies accepted.

Labusiak’s treasure chamber is next to the cathedral -- a warren of air-conditioned Gothic rooms harboring some 650 items, the largest intact church collection that has stayed in its original home. The eye darts from gold chalices to ivory reliquaries, from dramatic tapestries to faded silks and sparkling jewels, all hundreds of years old.

A gilded Eucharistic bowl from 11th-century Constantinople may have been used in the Church of Hagia Sophia in the heyday of the Byzantine empire. The “Abraham Angel Tapestry,” completed in 1150, is the oldest of its kind. A golden, gem-studded arm displays the wizened, blackened finger of St. Nicholas. Labusiak refuses to say which of these priceless objects is the most important.

He recounts how his collection even aroused the envy of Neil MacGregor, the director of the British Museum. MacGregor visited last year with arts patron Jacob Rothschild, arriving by private jet. Their quest, Labusiak says, was to examine the technology used by German museums to exhibit medieval artifacts.

Yet MacGregor was clearly more excited by the quality of the Halberstadt treasure than the vitrines, Labusiak says. He was particularly struck by a pannisellus, a rare silken cloth that was attached to a bishop’s staff in the Middle Ages. Few have survived because of their fragility.

“He threw up his arms and exclaimed ‘It’s not fair!’” Labusiak says.

“I never thought I would have to console the director of the British Museum,” he laughs. “I told him, ‘Well, you have a good collection too.’”

Back on set in the cathedral, the fake Van Eyck has vanished. The wooden frame stands empty with 12 gaping holes for the missing panels.

“Action!” calls Clooney. Two men, one in military uniform and one in a curate’s black cassock, walk slowly down the ancient flagstones toward the empty frame.

“Cut! Very good,” Clooney says. His plan is to film through the night.

Edsel’s book bears the sub-title: “Allied Heroes, Nazi Thieves and the Greatest Treasure Hunt in History.” That is simpler than the reality. There were, of course, also German heroes and even Allied thieves, as Labusiak says.

Halberstadt, at the foot of the Harz Mountains, was once a medieval, half-timbered architectural jewel. It suffered horrific damage in World War II. The city center was reduced to rubble in just half an hour of U.S. carpet-bombing on April 8, 1945. The cathedral was hit and its roof almost caved in.

The hero who saved it was a local architect called Walter Bolze. The church was so precarious, he only allowed men without families to help him secure it in parts. Bolze also later restored it.

The story of the treasure in neighboring Quedlinburg, which Labusiak also oversees, is ripe for Hollywood treatment, while decidedly off-message for Clooney’s movie.

Stored in a mine-shaft near Quedlinburg for safekeeping during World War II, the trove included the gem-studded 13th-century “Samuel’s Book of Gospels,” which contains a ninth-century manuscript written in golden ink.

One of the U.S. army officers assigned to guard it instead stole eight items -- including the gospel book -- and posted them via military mail to Texas. He kept the haul until his death. It only returned to Quedlinburg in 1993. Two pieces are still missing.

“That,” says Labusiak, “is the other side of the story.”