Nazi Looted Art and Cocaine: When Museum Directors Take It, It Call the Cops 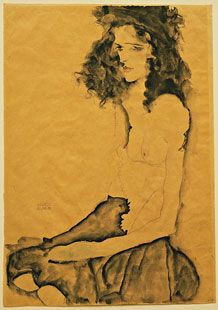 Egon Schiele's Girl with Black Hair - Stolen From Fritz Grunbaum When He Was In the Dachau Concentration Camp, now at the Allen Art Museum at Oberlin College﻿

The Rutgers Journal of Law and Religion, as part of their Nuremberg volume, just published my article:  Nazi Looted Art and Cocaine: When Museum Directors Take It, Call the Cops.  Check out Volume 14 here.

The article argues that the U.S. government clearly condemned the theft of artworks from victims of Nazism and that federal and state statutes have consistently forbidden the traffic and concealment of stolen property.  As such, Nazi looted art should be treated as a contraband substance, like cocaine, and should be returned to its true owners under the common law precept that no one can take good title from a thief.

The article further argues that federal courts have misconstrued state statutes of limitations and principles of equity to permit museums and private collectors to inappropriately launder title to stolen artworks. The article arguest that it is time for prosecutors to act and that the National Stolen Property Act gives them a weapon to do so. They have the weapons and evidence, only the political courage to confront powerful museums with the evidence is lacking.

The article argues that museums, colleges and individuals who use technical defenses to keep stolen property as the Toledo Museum of Fine Art, the Detroit Institute of the Arts, the Museum of Fine Arts Boston, the MoMA and the Guggenheim have done bring only disgrace upon themselves and don't clean title to the stolen goods.

The article further argues that this is not a victimless crime because the wealthy donors who have "donated" the stolen artworks to museums got a tax break for the "fair market value" of the artworks.  Accordingly these tax cheats, with the complicity of inattentive museum trustees, have stolen from their fellow taxpayers and have unfairly saddled publicly-supported institutions with costly problems.