April
Bloomberg 8 May 2013
By Catherine Hickley

The heirs of Richard Semmel, a Jewish industrialist persecuted by the Nazis, said they’re “outraged” by a Dutch government panel’s decision to reject their claim for two Old Masters on the grounds that the works are more important to the museums which house them now than they are to the heirs.

The Dutch Restitutions Committee dismissed claims by Semmel’s heirs for three of four paintings they say he sold at auction in 1933 after fleeing Nazi Germany. Though the committee found that Semmel sold three works under duress as a result of persecution, it said in an e-mailed statement that the heirs’ interest in two “carries less weight” than the museums’.

"Christ and the Samaritan Woman at the Well" by Bernardo Strozzi is to remain in the collection of the Museum de Fundatie in Heino, the Netherlands. The Dutch Restitutions Committee ruled that a claim by the heirs of Richard Semmel, a Jewish industrialist persecuted by the Nazis, "carries less weight" than the museum's interest in the work. Source: Dutch Restitutions Committee via Bloomberg 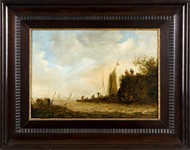 The Dutch Restitutions Committee ruled that the painting ``River View With Mooring'' by Maerten Fransz van der Hulst should be handed to the heirs of Richard Semmel, a wealthy Jewish industrialist who fled Berlin after the Nazis came to power. The committee rejected the heirs' claims for three further Dutch Old Masters. Source: Dutch Restitutions Committee via Bloomberg.

“The decision runs counter to existing inheritance law,” Olaf Ossmann, the Winterthur, Switzerland-based lawyer for the heirs said in a statement. “These decisions give museums support for rejecting restitution claims. This cannot be summarized as ‘fair and just.”’

The Netherlands was among 44 governments that, in 1998, endorsed international principles on returning art in public collections stolen from Jews who were victims of Adolf Hitler’s regime. The same guidelines apply to art sold under duress by those persecuted by the Nazis.

The Dutch Restitutions Committee was set up in 2002 to advise the government on claims for art in its collections. It can also, as in this case, give a binding opinion on disputed art in the collections of local communities or private institutions.

The two works in question are “Christ and the Samaritan Woman at the Well” by Bernardo Strozzi, part of the collection of the Museum de Fundatie in Heino, and an oil-on-wood painting called “Madonna and Child with Wild Roses” by Jan van Scorel (1495-1562), now in the possession of the Central Museum in Utrecht, which acquired it in 1958, according to the committee.

Semmel was a wealthy Jewish industrialist and a member of the German Democratic Party who lived in a Berlin villa full of art and antiques that he began collecting in the 1920s.

Describing his life after the Nazis came to power in 1933, he wrote in 1950 that he was “literally bombarded day and night with threats, in writing and by telephone.”

He fled to the Netherlands with his wife in April 1933 and sold his art collection in two auctions. Before the German occupation of the Netherlands he escaped again, eventually settling in New York in 1941, where he lived in poverty.

The claimants are the granddaughters of Grete Gross- Eisenstaedt, an old family friend who became Semmel’s companion in New York after his wife died, according to Ossmann. Semmel, who had no children, left his estate to Gross-Eisenstaedt. Her granddaughters live in South Africa, Ossmann said.

“The committee finds that the grandchildren of Semmel’s heir’s interest in restitution carries less weight” than the museums’ interest, the Restitutions Committee said in a statement sent by e-mail. “These grandchildren are not related to Richard Semmel, never knew him and have no recollections of the paintings.”

In the case of a third painting, “Dune Landscape with Deer Hunt” by Gerrit Claesz, the committee ruled that it should not be returned by the Frans Hals Museum in Haarlem because of a lack of evidence that Semmel owned the work.

A fourth painting sold under the same circumstances as the other three, “River View With Mooring” by Maerten Fransz van der Hulst should be handed to Semmel’s heirs by the Groninger Museum, the Dutch Restitutions Committee said.

The main reason given in its statement in favor of restitution was “that the museum has little or no interest in the painting, probably because it does not fit in with its collection.”

“The Committee regards the emotional and moral importance of the return to the heir’s grandchildren carries more weight given the museum’s lukewarm interest in retaining the painting,” according to the statement.

Ossmann said the heirs are exploring ways to challenge the opinion in a Dutch court.

“The commission recognizes that the losses were the result of persecution, yet reaches different decisions on the obligation to restitute,” Ossmann said.

The panel’s observation that the claimants are not biologically related and didn’t know Semmel “carries cynical traits” given that the heirs could only recently get access to archives proving Semmel’s ownership of the paintings, he said.

In a previous decision in 2009, the Dutch panel decided to return “Portrait of a Man” by Thomas de Keyser to Semmel’s heirs.

“It appears that Semmel was put under such pressure that he fled Germany in April 1933 and as a result was forced to sell his property or leave it behind,” the Dutch panel said on announcing that decision.