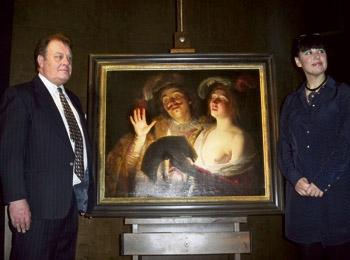 Gerald Matthes takes possession of a painting the Nazis looted from his grandfather as Montreal Museum of Fine Arts director Nathalie Bondil joins him.

MONTREAL — The Montreal Museum of Fine Arts (MMFA) has restituted a valuable Nazi-looted artwork that has been in its collection since 1969 to the descendants of the German Jewish family that owned it before World War II.

On April 23, the MMFA formally handed over the 17th-century painting The Duet by Dutch artist Gerrit van Honthorst to Gerald Matthes, grandson of Bruno Spiro, a wealthy Hamburg businessman.

Matthes, a retired Madison Avenue advertising executive now living near Detroit, had been searching for the painting for close to five years.

His lawyers in Berlin traced the painting to the MMFA, which says it bought it in good faith from an art gallery with bequests from Horsley and Annie Townsend and William Gilman Cheney.

The return follows “an in-depth research process by the MMFA’s archives department and the receipt of new information from representatives of the family,” said Nathalie Bondil, the MMFA’s director and chief curator.

Matthes was born in Hamburg in 1938, a couple of years after his maternal grandfather’s death, and was brought by his mother to England where he grew up. He has been living in the United States for many years.

He said in an interview that his grandfather made a fortune in arms dealing and amassed “hundreds” of paintings, nearly all of which were despoiled by the Nazi regime. The Duet, which his grandfather is believed to have bought in May 1931 when the St. Petersburg’s Hermitage put it on the block at a Lepke auction in Berlin, is the first to be recovered.

Five months later, in a handwritten document dated Oct. 7, 1931, Spiro mentions a Honthorst painting of a “musizierendes Paar” (a couple making music) on display in his music room.

In this document, Spiro also transfers the ownership of his Berlin house at Heerstrasse 85 with all its contents, including The Duet, to his wife, Ellen Clara Spiro. Under the Nazi regime, he was deported and died in 1936. His wife was forced to give up all her assets.

Seeing the work for the first time, Matthes described it as “a strange experience… My wife is a professional singer of duets.” The dramatically lit picture is of a man and woman singing from the same book.

The painting will be sold at auction in New York in June by Christie’s, said Matthes, who did not offer an estimate of what it might fetch.

Matthes will be giving a “substantial amount” from the proceeds of the sale to the MMFA “for acting in good faith.”

“A huge amount will go to the lawyers in Berlin, and the rest to the seven heirs of [Bruno Spiro].”

Matthes hopes that the money that  remains with the family will go toward anti-abortion activity. “My grandfather made a fortune in the arms business. It is my treasured hope that the money will be used for pro-life [work]. It makes sense, things will come full circle with the promotion of life.”

Matthes is trying to identify at least one more of his grandfather’s despoiled collection. “But it is very hard when art is in private hands. Until it is put up for auction or with a dealer, it remains untouchable.”

Bondil said: “Although we cannot but regret the loss of this superb canvas by a master of the school of Utrecht, we feel that justice needs to be done.”

The loss of The Duet, which had been on display for a long time in the Jean Desmarais Pavilion, has been somewhat offset by the donation of another painting – which had also been Nazi looted – and the acquisition of another Honthorst – Woman Tuning a Lute, painted approximately the same year (1624).

The donated painting, Austrian Ferdinand Georg Waldmüller’s Children on Their Way Home from School (1836), was restituted recently to the Jorisch family of Montreal.

According to Bondil, “every great museum in the world possesses one of his works.”

This charming scene of two children on the road in the Bavarian mountains belonged to the wealthy Viennese Jewish industrialist Viktor Zuckerkandl, the great-great-uncle of Stéphane Jorisch, who represented the donors.

It is among a number of valuable artworks his father, Georges Jorisch, who died last September, was able to reclaim in the couple of years before his death.

When Zuckerkandl and his wife died childless in the 1920s, their home and its contents were passed to Victor’s sister, Amalie Redlich, Georges Jorisch’s maternal grandmother.

During the 1938 Anschluss, her property was seized by the Germans. She and her daughter, Mathilde, Georges Jorisch’s mother, were deported to the Lodz Ghetto in 1941 and did not survive the Holocaust.

Georges and his father fled to Belgium where they hid, and Georges immigrated to Montreal in 1957.

Between 2011 and 2012, Jorisch recovered some of his great-uncle’s vast collection, including a Gustav Klimt masterpiece that sold for more than $40 million at auction in New York in 2011.

Stéphane Jorisch said it was the wish of his father, who lived modestly as a photography-store owner, to donate the Waldmüller work to the MMFA in appreciation to the city of Montreal for welcoming him after the war.

The MMFA’s acquisition of Woman Tuning a Lute was in part with the compensation from the Matthes family. Bondil said it was by a seemingly “miraculous coincidence” that the MMFA discovered the work at the Maastricht fair. The work was unknown until earlier this year when it was put on the market by a private collector in France.

This painting will commemorate the Spiro family, she said. Both new paintings will be on view free of charge at all times.