Family Seeks Return of a Matisse Seized by the Nazis

The heirs of a French art dealer are demanding that a Norwegian museum return one of its featured paintings, a Matisse that was confiscated by the Nazis in 1941 in Paris. 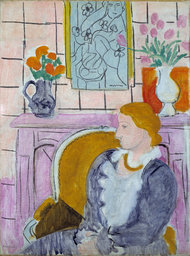 The Matisse once owned by the Parisian dealer Paul Rosenberg.

The family of Paul Rosenberg, a prominent Parisian gallery owner, has documents showing that the painting, known as “Woman in Blue in Front of Fireplace,” or “Blue Dress in a Yellow Armchair,” was among those in the possession of the Luftwaffe chief Hermann Goering in 1942. The documents include a long list, stamped with Goering’s initials, itemizing artworks taken from Mr. Rosenberg’s vault.

But the museum, the Henie Onstad Arts Center, founded in 1968 by the Olympic skating champion Sonja Henie and her husband, the shipping magnate Niels Onstad, says Mr. Onstad bought the painting in good faith more than 60 years ago, giving the center ownership rights to the work under Norwegian law. The law requires a minimum of 10 years’ possession.

The museum, outside Oslo, said it did not know the painting had once been Nazi plunder, but it does not contest that, in light of the evidence. It says that it is continuing to negotiate with the heirs and to study the work’s provenance, and that it will discuss the family’s request at a board meeting next month.

“We need to investigate this matter properly,” said the museum’s director, Tone Hansen. “It is too early to draw any conclusions. We are in dialogue with the family and will continue to be so.”

She added, “This case has other aspects than pure legal aspects that have to be taken into consideration.”

The Rosenberg family became aware of the Matisse’s location last summer, when the Art Loss Register, an art-recovery company that had put the painting on its list of missing artworks, noticed that it was on loan to the Pompidou Center in Paris. The museum and the Rosenbergs have been negotiating quietly since.

Museum officials met twice with family representatives, first in Norway and then in New York. Marianne Rosenberg, a New York lawyer who is a granddaughter of Paul Rosenberg and took part in the second meeting, said a museum official offered to help resolve the matter by placing a plaque next to the Matisse, acknowledging that Paul Rosenberg had owned it. The family rejected the offer, she said.

A museum spokeswoman said she could not comment on the talks.

The Matisse was painted in 1937, the year Mr. Rosenberg bought it. According to documents gathered from Nazi files, as well as records kept by Mr. Rosenberg and his heirs, it was one of about 160 works that German soldiers were sent to seize from the Rosenberg Gallery’s vaults as part of a widespread confiscation of art owned by Jews.

“This is the most well-documented claim I have ever seen,” said Christopher A. Marinello, a lawyer and the director of the Art Loss Register.

By 1942, the painting was in the hands of a Paris collector, Paul Pétridès. In 1949, museum records show, it was in the possession of Galerie Bénézit of Paris, from which, museum officials said, Mr. Onstad bought it in either 1949 or 1950. Mr. Marinello said that a lawyer for the museum, Kyrre Eggen, informed the Rosenbergs that the museum was researching whether it was possible that Mr. Rosenberg, who returned to Europe after the war in an effort to recover his property, took part in a transaction involving the painting before its purchase by Mr. Onstad.

“Our family was deeply affected by the war,” she said, “and we do not make frivolous claims, and that assertion is frankly insulting.”

The museum said it had never tried to hide its ownership of the painting, which it has lent to several European museums.

Ms. Rosenberg said it was not surprising that her family had not discovered the Matisse earlier, given that it has been busy for decades trying to recover more than 400 items looted by the Nazis and scattered around the world.

“The onus is not on the claimant to have to go scooting around looking in every catalog and small museums hunting for their stolen art,” she said.

The Matisse is among the prized possessions of the arts center, which has two Picassos, two Matisses and works by Miró, Klee and several dozen other prominent Modernists that it refers to as its “core collection.”

The museum’s initial collection was largely the artwork given it by Henie and Mr. Onstad. Henie, who won gold medals in Olympics figure skating in 1928, 1932 and 1936 before becoming a Hollywood star, died in 1969. Mr. Onstad died in 1978.