Matisse in Norwegian museum was once Nazi loot

OSLO, Norway (AP) — The family of a prominent Parisian art dealer is demanding that a Norwegian museum return an Henri Matisse painting seized by Nazis under the direction of Hermann Goering, in the latest dispute over art stolen from Jews during World War II. 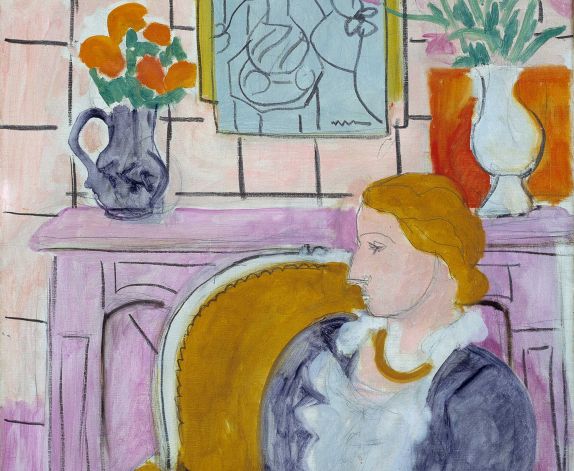 This undated image released by Henie Onstad Kunstsenter on Friday April 5, 2013, shows part of the painting "Blue Dress in an Yellow Arm Chair", circa 1936 by Henry Matisse

The painting at the center of the dispute, Matisse's 1937 "Blue Dress in a Yellow Armchair," depicts a woman sitting in a living room. It has been among the highlights of the Henie Onstad Art Center near Oslo since the museum was established in 1968 through a donation by wealthy art collector Niels Onstad and his wife, Olympic figure-skating champion Sonja Henie.

Museum Director Tone Hansen said it had been unaware the painting was stolen by the Nazis until it was notified in 2012 by the London-based Art Loss Register, which tracks lost and stolen paintings.

She said Onstad bought the painting in "good faith" from the Galerie Henri Benezit in Paris in 1950. The Benezit gallery "has no record of collaborating with the Nazis, as many galleries did," she said in an interview.

Although the war ended almost 70 years ago, disputes over looted art have become increasingly common in recent years, in part because many records were lost, and in part because an international accord on returning such art was only struck in 1998.

But the case of the Matisse is somewhat different in that its former owner, Paul Rosenberg, was one of the most prominent art dealers in Paris before the war, which he survived by fleeing to New York. Art Loss Register Director Chris Marinello said the records in this case are unusually clear.

According to a biography published by New York's Museum of Modern Art, Rosenberg was one of the preeminent modern art dealers of his day, and personal friends with Picasso and Matisse, among others.

Art Loss Registry documents show he purchased "Blue Dress" directly from the painter, having noted the purchase in 1937 and put it on display in the same year, Marinello said. After the war, Rosenberg re-established his business and sought to recover more than 400 works that had been taken by the Nazis.

Marinello showed The Associated Press documents that name the piece now on display in Norway as among those missing after the war.

He slammed the Henie Onstad art museum for "stonewalling."

"The evidence is overwhelming. They just don't want to resolve this," he said.

Paul Rosenberg died in 1959. His family has remained prominent, as his son Alexandre was a war hero and later began his own art dealership.

Another granddaughter, American lawyer Marianne Rosenberg, said Friday she didn't wish to antagonize the museum, but hoped that it would come to realize that it is wrong in every sense of the term.

The paintings seized from Paul Rosenberg and other Jewish victims of Nazi aggression were taken "under difficult conditions, in a cruel and unfair situation," she said in a telephone interview from her office in New York. "We honor my grandfather Paul's memory ... by doing what he would have done: we wish to recover that which we consider ours."

Marianne Rosenberg, granddaughter of prominent Parisian art dealer Paul Rosenberg, poses for a photo during an interview with The Associated Press, Friday, April 5, 2013, in New York.

The lawyer representing the museum, Kyre Eggen, said it was significant that Onstad didn't know where the painting came from.

Under Norwegian law, if a person has had an item in good faith for more than 10 years, that person becomes the rightful owner, he said.

The Seattle Art Museum returned a Matisse to the Rosenberg family in 1999, after initially making similar arguments.

Eggen also argued that it is possible Rosenberg sold the painting himself between 1946 and 1950.

But Marianne Rosenberg rejected that possibility. Art Loss Register documents show Paul Rosenberg notifying French authorities the piece was missing in 1946, and his family again listing it as among missing pieces it was seeking in 1958.

"The Rosenberg family has since the end of the war assiduously and continuously sought the recovery of the paintings it lost," she said. "We have never sought to recover paintings not lost."