When the Jewish Museum of Vienna was founded in 1988 it was entrusted with safeguarding the art, books and Judaica that survived the Nazis’ attempt to exterminate their owners. 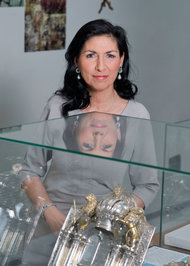 Replying to criticism, Danielle Spera of the Jewish Museum of Vienna, said, “Our situation is not comparable to any other museum in Austria.”

But now, 25 years later, the museum has acknowledged it may be in possession of hundreds of items that were looted during the war and not returned to the families who lost them. A screening of its collection has so far revealed 490 objects and more than 980 books that curators suspect might have been taken from Jews, including a dozen paintings by the artist Jehudo Epstein.

This discovery highlights the unique and sometimes uncomfortable position that Jewish museums can find themselves in when it comes to handling cultural artifacts that survived World War II, museum administrators and restitution experts said.

There is hardly a public collection in the world that has not been condemned for dragging its feet on the issue of returning valuables plundered by the Germans.

What has grabbed attention in this case was that the institution is a Jewish one, which, leaders of museums and Jewish organizations agree, has a special moral responsibility for ensuring that items stolen from Jews are returned.

If most museums focus on protecting and displaying their collections, Jewish museums, according to Marc Masurovsky, a founder of the Holocaust Art Restitution Project, have a dual mission: to serve as custodians of a heritage and to research and return recovered objects. “In some cases, however, the need to safeguard and protect the heritage has overshadowed the obligation to conduct provenance research,” he said. That seems to be what happened in Vienna, museum administrators there concede.

“For historic reasons people did not see themselves responsible for investigating the collection referring to provenance,” Christian Kircher, a member of the Vienna Jewish Museum’s board, wrote in an e-mail. “This attitude changed completely during the last few years.”

In 1998 the Austrian Parliament passed a law requiring restitution for Jews whose property was plundered during the Nazis’ reign. It was passed after the Leopold Museum in Vienna had spent more than a decade fighting an effort by Jewish heirs to reclaim two paintings by Egon Schiele.

Even so, systematic screening of the Jewish Museum’s various collections only began in 2008, according to the museum.

Der Standard, a German-language newspaper in Vienna that reported the museum’s findings last month, has been critical of the delays, saying, “For years museum officials refused to offer information on the origins of its collection or wiped the issue off the table.”

To explain the Vienna museum’s record, Danielle Spera, its director since 2010, said it helped to recall a Vienna that no longer exists, one that had a thriving community of more than 185,000 Jews, that created the first Jewish museum of its kind in 1895 and that housed about 100 synagogues. By war’s end that society had been shattered. The museum was disbanded; one synagogue was left standing, and few Jews survived.

When the Vienna Jewish Museum was reconstituted in 1988, it became the repository for what was left of the original museum’s collection as well as other orphaned artifacts — Torah crowns, Passover Haggadot, prayer shawls. That store increased after Max Berger, a Holocaust survivor who scoured antiques stores and auctions in the 1960s and 1970s for prewar Judaica, donated his large collection.

The task of conserving and cataloging this inventory was enormous and complicated, Ms. Spera said. For many items no transfer or withdrawal lists existed so “any classification and provenance research was nearly impossible,” she said. “To research the provenance of Judaica is extremely difficult. And our collection consists largely of ritual objects and only a very small part of art works.”

“Our situation is not comparable to any other museum in Austria,” Ms. Spera said.

Ruth Beesch, deputy director for program administration at the Jewish Museum in New York, said that researching ritual objects and Judaica is sometimes an impossible task because there are no identifying marks or labels.

Complicating the issue in Vienna was a lack of funds, Ms. Spera said. For the first five years of the museum’s existence it did not have its own building. In 1993 it established a permanent home in the Palais Eskeles, the former residence of the Jewish banker who helped found the Austrian National Bank. In 2000 it opened a second location on the Judenplatz, by the excavated foundations of a medieval synagogue.

Julie-Marthe Cohen, curator at the Jewish Historical Museum in Amsterdam and an author of “Neglected Witnesses: The Fate of Jewish Ceremonial Objects During the Second World War,” said in an e-mail that “in general, lack of financial means prevents Jewish museums from doing provenance research.”

Ms. Spera said that requests for money to finance such research were denied by city officials, and that the museum was not eligible for federal financing of restitution investigations.

As for the museum’s own budget, Ms. Spera said, the Palais Eskeles was in desperate need of repairs when she took office. The elevators were out of service, there were no computers, and the air-conditioning was broken, interfering with proper climate controls. Of necessity her first priority became infrastructure repair, Ms. Spera maintained. “The alternative was to close.”

She spearheaded a major renovation that was completed in November 2011. When that was done, Ms. Spera said, she hired a part-time provenance researcher to work 10 hours a week.

In September the museum turned over the first batch of completed provenance research to the Vienna Restitution Committee, a governmental organization, and to the board of what is known as the Israelitischen Kultusgemeinde, the official body that represents Vienna’s Jews. It contained dossiers on 61 objects, including “Italian Landscape” by Epstein, a Jewish artist whose signature was frequently erased from his canvases by the Nazis. He left Austria in 1936, entrusting 172 of his works to Bernhard Altmann, a Jewish textile manufacturer who fled the country after Germany’s annexation in 1938. The board — which has responsibility for the return of lost items — voted in October to give the painting back to Epstein’s heirs in London, but it has not yet been delivered.

Experts like Sophie Lillie, an art historian and the author of “Was Einmal War,” a handbook of Vienna’s plundered art collections, said that while the museum could have done more, “I don’t think the current public criticism is really justified.”

The flurry of attention has brought some change, however. The researcher’s hours were recently increased to more than 30 a week, Ms. Spera said, and the museum has also started listing questionable objects on the Lost Art Internet Database, run by Germany’s central office for the documentation of lost cultural property.

Ms. Spera, who said she lives a “very traditional Jewish life,” added that she has been stung by the recent criticism. Most of her husband’s relatives were killed during the Holocaust, she said. Her father was sent to a labor camp. When the Allied bombs fell, she recounted, he was forced to excavate dead bodies.

“I feel it as a personal obligation,” Ms. Spera said of reuniting owners with long-lost possessions. “I’m absolutely passionate about that.”