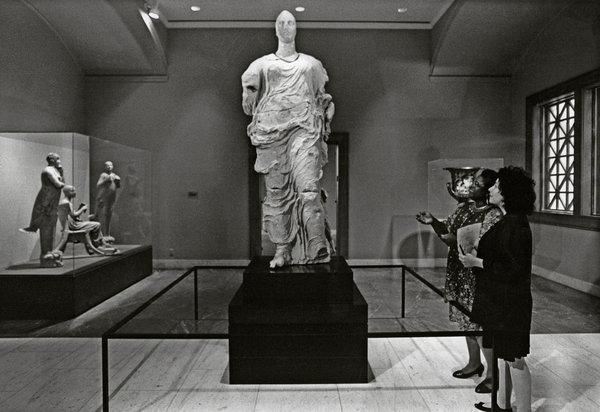 This limestone and marble cult statue of a Greek goddess was given to Italy by the J. Paul Getty Museum in 2010 after the museum, responding to litigation in Italy, concluded that it had been looted. Its place of discovery remains unknown. More Photos »

THE news has become astonishingly routine: a major American museum announces it is relinquishing extraordinary antiquities because a foreign government claims they were looted and has threatened legal action or other sanctions if it doesn’t get them back. 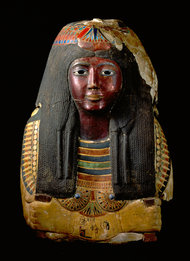 The funerary mask of Ka-Nefer-Nefer, acquired in 1998 by the Saint Louis Art Museum, is now claimed by Egypt. More Photos » 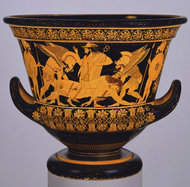 The Metropolitan Museum of Art returned this vase, decorated by the Athenian painter Euphronios, to Italy in 2006, following revelations that it had been looted in the early 1970s. More Photos »

In the past two months, the Dallas Museum of Art has transferred ownership of seven ancient artworks, including a pair of Etruscan bronze shields, to Italy and Turkey; the Toledo Museum of Art has handed over to Italy a rare water vessel that had been on display since 1982; and the J. Paul Getty Museum in Los Angeles has announced it will be transferring to Sicily a terra-cotta head believed to depict the Greek god Hades, which it purchased from a New York dealer in 1985 for more than $500,000. Other museums across the country — including the Metropolitan Museum of Art in New York, the Museum of Fine Arts in Boston and the Cleveland Museum of Art — have also given up prized antiquities.

Since 2006, more than 100 statues, bronzes, vases, mosaics and other works have left public collections in the United States. Among them was the Euphronios krater, depicting a scene from the “Iliad,” which awed visitors to the Met for decades, and a rare limestone and marble statue of a Greek goddess, which the Getty purchased for $18 million in 1988.

In nearly every case, the museums have not been compelled by any legal ruling to give up the art, nor are they receiving compensation for doing so. And while a few of the returned works have been traced to particular sites or matched with other fragments residing in the claimant country, many of them have no known place of origin.

Museums have heralded these restitution agreements as a way to take a stand against illegal excavation and forge stronger ties with art-rich nations. In September, the University of Pennsylvania Museum of Archaeology and Anthropology agreed to send to Turkey — on “permanent loan” — 24 pieces of ancient gold jewelry that it acquired in 1966 and that may have come from Troy.

Although Penn officials concede that the jewels’ actual place of discovery, or findspot, is unknown, they say the deal has allowed them to secure continued access to the Aegean sites where their archaeologists have worked for decades. (In a similar quid pro quo in 2011, the Turks threatened to suspend the license of the German Archaeological Institute, which has been active in Turkey since Ottoman times. After Germany returned a sphinx Turkey had claimed, that threat was revoked.)

But giving up objects has done little to halt the international trade in looted antiquities, while rewarding the hardball tactics of foreign governments and impoverishing Americans’ access to the ancient world. And while preserving good relations in some cases, these agreements have also spurred a raft of extravagant new claims against museums — backed by menacing legal threats.

Countries like Italy and Greece have used the news media to embarrass museums with alarming stories of rogue curators and nefarious dealers; they have withheld exhibition loans from museums that rebuff them; and they have resorted to aggressive legal action, opening criminal investigations of museum staff and enlisting the help of American federal prosecutors to obtain museum records and seize disputed works.

In the process, museums’ relationships with foreign governments have become increasingly contingent upon giving in to unreasonable, and sometimes blatantly extortionary, demands. As Stephen Clark, the Getty’s current chief counsel, put it, “The Turks have said to me flat out” that they won’t loan the museum any art “unless you give up something we want.”

Foreign governments’ tactics have become so threatening that some museums are now combing through their permanent collections and pre-emptively giving up works that might become the targets of future claims.

Museums themselves are partly to blame. For decades, most antiquities available in the international art market that had not come from pre-20th century private collections lacked a known findspot and date of discovery. Museums figured they could collect these objects because they bought them in countries with legal antiquities markets and notified potential claimant governments when they bought them. But since there was no record of the works’ archaeological origins, the governments had little basis for making a claim. And when they did — often on hearsay or stylistic grounds — there was rarely sufficient proof for recovery.

Then, in the late 1990s, Italian and Swiss police raided the Geneva warehouse of an Italian antiquities dealer and discovered a vast trove of Polaroid photographs showing dirt-caked antiquities. While the images did not reveal findspots, they provided lurid evidence of looting; worse, many of the works had subsequently ended up in American display cases. Based on those photographs, Italian prosecutors began investigating American museums, starting with those like the Getty that had the most active acquisitions programs.

Initially, cultural officials in Rome, who had more than enough antiquities of their own to worry about, were not looking for a fight. When I interviewed Italian investigators in 2002, I was told they did not expect museums to give up every object they could now trace to an illicit source. What they did want, as Daniela Rizzo, the lead government archaeologist working on the case, said, was a “symbolic act of restitution” of a few of the artworks for which the evidence was especially explicit, combined with robust pledges from the museums to stop buying antiquities with no known findspot.

But when Italian officials proposed a grand bargain to the Getty, the museum’s senior leadership at the time stonewalled. Italian prosecutors responded with the highly unusual criminal indictment of Marion True, then the Getty’s antiquities curator. And taking advantage of mutual legal assistance treaties with the United States, Italian prosecutors discovered they could rely on American custom officials and federal prosecutors to pursue objects in American museums, even without a formal legal ruling.

Museum directors and their boards were terrified; restitution quickly became the most attractive option. The Getty did everything it could to distance itself from Ms. True and eventually paid outside attorneys $16 million to help it reach an agreement to send to Rome more than three dozen objects — far more than the Italians had asked for in the first place. And yet, as museums have lined up to sign restitution agreements, the much-publicized criminal investigations have been remarkably unsuccessful in proving any intentional wrongdoing by American curators.

In Rome, Ms. True was charged in 2005 with taking part in a long-running criminal conspiracy to acquire looted art and faced a sensational criminal trial. The case, which involved antiquities dealers who had done business with many American institutions, stunned the museum world. Yet after five years of sporadic hearings in which the defense never made its case, the charges against her were finally dismissed with little fanfare in October 2010.

By then two other Greek lawsuits against Ms. True — themselves inspired by the Italian indictment — had already been dismissed. And last October, a fourth and final criminal case against Ms. True went to trial in a courtroom on the Greek island of Syros and was dismissed after a single day of proceedings.

Italian prosecutors have also failed to make headway in a similar criminal conspiracy case targeting J. Michael Padgett, the antiquities curator of the Princeton University Art Museum. Princeton was quietly informed in November that, after two and a half years, no charges were being pursued and the investigation of Mr. Padgett had been formally closed.

THESE outcomes raise serious questions about the extent to which legal pressure has been used to intimidate museums into giving up art. Indeed, the Italian investigation of Mr. Padgett and the Italian and Greek cases against Ms. True came to an end only after Princeton and the Getty and other museums mentioned in those cases agreed to give up numerous objects. (In September 2007, with restitution agreements in hand from the Getty, the Met and the Boston M.F.A., Paolo Giorgio Ferri, the Italian prosecutor in the conspiracy case against Ms. True, told me that its main goal had already been achieved: “There’s no reason to go on in the outrage against Ms. True.”)

Observing the success of this hardball strategy, other countries have been making threats of their own to retrieve objects from American collections, regardless of how long the object may have been out of the country and how little basis they have for claiming it.

The Cambodian government is threatening to sue the Norton Simon Museum in Pasadena, Calif., to get back a 10th-century statue that has been on display since 1980 and whose ownership has never before been challenged. Italian prosecutors have revived efforts to claim the “Getty Bronze,” a statue created in ancient Greece and found in international waters. And the United States government is continuing a lawsuit against the Saint Louis Art Museum to help Egypt reclaim an ancient Egyptian mask, despite a ruling by an American judge last March that the government “completely failed to identify” the “established law that was violated” in its acquisition.

Meanwhile, Turkish officials have declared an all-out war on Western museums. Claiming a long list of works from the Getty, the Met, the British Museum, the Louvre and the Victoria and Albert Museum — some of them acquired in the 19th century and some from countries other than Turkey — the Turkish government has cut off ties to the offending institutions until they give them up. “All loans have been stopped; all cooperation suspended,” said Neil MacGregor, the British Museum’s director. “This is a kind of behavior that is really unprecedented.”

It was the recent wave of restitution agreements that emboldened foreign governments to make the threats. Though they have involved tens of millions of dollars’ worth of art, the deals have not been made public (the Met’s 2006 agreement with Italy is an exception); nor, for the most part, has the evidence on which they are based been disclosed. Moreover, because the deals are premised on physical repatriation, they have ignored more enlightened solutions, like granting title to a foreign government but keeping disputed works in American museums on loan. Cultural property lawyers say it is doubtful that foreign governments could have successfully claimed in court most of the works museums have handed over to them.

Most troubling, the overriding focus on restitution has directed valuable museum resources toward disposing of works acquired long ago when the most urgent priority should be protecting threatened archaeological sites today.

“Has any of this affected the real evil, which is looting?” asks Stephen Urice, a cultural property lawyer at the University of Miami who has advised museums on restitution issues. “From what I see,” he adds, “it’s getting worse.”

Maxwell Anderson, the director of the Dallas Museum and a vocal proponent of voluntary restitution, argues that the agreements will bring long-term benefits by persuading foreign countries to lend more art. Yet he, too, concedes that the deals have done little to curb the plunder.

Looting is a terrible scourge, and museums must be held to the highest ethical standards so they don’t unwittingly abet it. But they are supposed to be in the business of collecting and preserving art from every era, not giving it away. By failing to deal with the looting problem a decade ago, museums brought a crisis upon themselves. But in zealously responding to trophy hunting from abroad, museums are doing little to protect ancient heritage while making great art ever less available to their own patrons.

Hugh Eakin is a senior editor at The New York Review of Books.