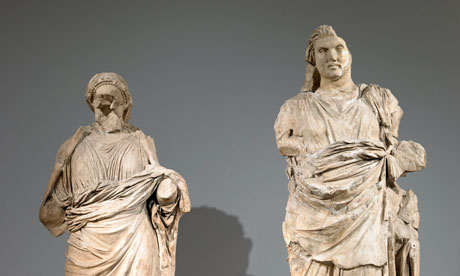 Two marble statues from the Mausoleum of Halicarnassus. Photograph: The Trustees of the British Museum

Human rights legislation that has overturned the convictions of terrorists and rapists could now rob the British Museum of sculptures created for one of the seven wonders of the ancient world.

A Turkish challenge in the European court of human rights will be a test case for the repatriation of art from one nation to another, a potential disaster for the world's museums.

Despite criticism of their own country's human rights record, Turkish campaigners are turning to human rights law – a dramatic move to reclaim sculptures that once adorned the Mausoleum of Halicarnassus, an ancient wonder along with sites such as the hanging gardens of Babylon and Egypt's pyramids.

Greek sculptors in 350BC created a 40-metre-high monument, crowned by a colossal four-horse chariot on a stepped pyramid. A magnificent horse's head is among sculptures acquired by the British Museum in the mid-19th century, which campaigners want returned to their original site – Bodrum in south-west Turkey.

An Istanbul lawyer, Remzi Kazmaz, told the Observer that a lawsuit will be filed at the European court on 30 January and that 30 lawyers are acting on behalf of the town of Bodrum as well as district and provincial governors, the Turkish ministry of culture and other bodies.

Kazmaz said: "We thank the British authorities and the British Museum for accommodating and preserving our historical and cultural heritage for the last years. However, the time has come for these assets to be returned to their place of origin ... Preparations for formal requests are taking place now."

A petition with 118,000 signatures has been organised and the Strasbourg court will be shown a documentary on how Turkey lost its ancient treasure.

Kazmaz said: "We do not believe that the artefacts were removed legally."

But he declined to elaborate on the planned legal arguments: "The lawsuit is a sensitive subject so, while I can confirm that the information you have is correct, we have to be understandably cautious".

Gwendolen Morgan, a human rights lawyer with Bindmans LLP, suggested that "the most likely line of attack" will be a breach by the UK of article 1, 1st protocol of the European convention of human rights, which states: "Every natural or legal person is entitled to the peaceful enjoyment of his possessions."

She said: "I suspect they'll use the litigation to ramp up the moral pressure on the British government … So it's quite a powerful campaigning tool … How this case will be interpreted by the European court of human rights will also be informed by the domestic law in force in the 1850s in the Ottoman empire when the mausoleum was taken by the British Museum. However, the European Convention on Human Rights is only in force since 1954 so there is a serious timing problem. The Turkish legal team may argue that because the Convention is a living instrument, it should be interpreted in light of current international law including the UNESCO heritage conventions and other Governmental statements about not depriving countries of their cultural patrimony. Much will turn on what was agreed at the time the statues were removed."

She joked: "I must go to the British Museum again soon before they [the sculptures] vanish."

Norman Palmer, a leading QC specialising in cultural property law, said: "I have not heard of it [human rights] being used to raise a claim for the specific restitution of particular tangible objects … This would be a novel claim."

The case will be keenly watched by Greece, which is seeking the return of the Parthenon marbles, and Nigeria, which wants the Benin bronzes back, and other nations seeking the repatriation of cultural artefacts.

A senior source in Greece said: "Greece will be following this with interest."

The mausoleum – built for Mausolus, king of Caria – is believed to have collapsed after a medieval earthquake. Some of its sculptures were taken by crusaders to their castle at Bodrum, from where they were recovered in 1846 by the British smbassador at Constantinople and presented to the British Museum. Others were retrieved in the 1850s during site excavations by the museum.

A British Museum spokeswoman said: "We have not heard anything about the legal case … so we can't comment." But, she added: "These pieces were acquired during the course of two British initiatives, both with firmans – legal permits issued by the Ottoman authorities – that granted permission for the excavation of the site and removal of the material from the site … to the British Museum."

Turkey is also pursuing claims against other institutions worldwide, including the Getty Museum in Los Angeles.

• This article was amended on 10 December 2012 to clarify a quotation.