Seven Year Saga of Bakalar v. Vavra Ends in Victory for Current Owner of Schiele Drawing and Settles Concerns Over Application of the Laches Defense 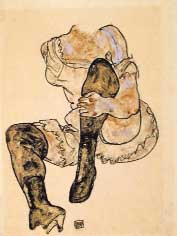 Last week, the United States Court of Appeals for the Second Circuit affirmed the New York Southern District Court's ruling that "Seated Woman With Bent Left Leg" (1917) by Egon Schiele should remain with its current owner, David Bakalar. The culmination of a lengthy court battle, this decision bars the claim by New York resident Leon Fischer and Czech citizen Milos Vavra, the heirs of Franz Grunbaum, that the drawing was rightfully theirs because it was taken from their family by the Nazis in 1938. The proceedings have been closely monitored by many in the art and legal worlds alike, awaiting the outcome of a case which would have significant implications for future title disputes over artworks--especially in Holocaust restitution cases.

The disputed drawing once belonged to Franz Grunbaum, a Viennese cabaret singer with an extensive art collection, prior to the outbreak of World War II. Following Grunbaum's arrest in 1938, the Nazis gave permission to Schenker & Co. AG, a shipping company, to export Grunbaum's extensive art collection. However, it is unclear whether "Seated Woman" was among the 420 pieces taken by Schenker. Grunbaum died in the Nazi concentration camp Dachau in 1941 and his wife Elisabeth died a year later in Munich. Some years later, art dealer Eberhard Kornfeld, a partner in the Swiss gallery Gutekunst & Klipstein, acquired the painting in 1956. He claimed that he acquired the piece from Elisabeth Grunbaum's older sister, Mathilde Lukacs. Otto Kallir, Jewish collector and dealer, eventually acquired the painting for his New York gallery and sold it to Boston philanthropist David Bakalar in November 1963. In 2005, Bakalar sold the drawing at Sotheby's in London. Shortly afterwards, the Grunbaum heirs, Leon Fischer and Milos Vavra, informed Sotheby's of their claim. Sotheby's responded by voiding the sale and informed Bakalar that his ownership was at issue.

Bakalar filed a complaint for a declaratory judgment in New York district court that, as a bonafide purchaser (a good faith purchaser), he was the rightful owner of the drawing. The heirs filed a counterclaim, stating that under New York law, even a bonafide purchaser cannot acquire good title to an artwork that has been stolen in the first place.

This case ultimately turned on the defense of "laches," an equitable doctrine asserted by Bakalar that bars title actions in which there has been a lengthy delay in filing a claim. The attorneys for the heirs of Dunnington, Barthlow, and Miller LLP had raised a revolutionary argument--that the defense places excessive difficulty on claimants and the burden should be shifted onto the buyer to demonstrate that he or she demonstrated the proper due diligence in acquiring the work.

The implications of this case drew the attention of many in the art and legal sectors. The ruling on the laches defense would have serious consequences for galleries, dealers, private owners, and museums alike, fearful that so changing the doctrine would have "a significant and negative impact on the art market in New York" (see: The Art Newspaper). A joint amicus brief was filed by heavy-hitters such as the Art Dealer's Association of America, the Society of London Art Dealers, and the U.K. dealer Richard Nagy demonstrates such anxieties, as the brief argued that the laches defense should not be limited, as the heirs were asserting.

Ultimately, the district court ruled in favor of Bakalar. It stated that to prevail in asserting the laches defense, a defending party must show that (1) the claimant was aware of the claim (or had reason to know of the claim), (2) the claimant inexcusably delayed in taking action, and (3) the defending party was prejudiced as a result. The district court held that Vavra and Fischer's "ancestors were aware of--or should have been aware of--their potential intestate rights to Grunbaum property," and that the ancestors "were not diligent in pursuing their claims to the drawing." And last Thursday, October 11, the Second Circuit affirmed.

Following last week's ruling, bonafide purchasers in New York can rest a little easier, though the decision is a disappointment to future claimants seeking restitution of their ancestors' property.