Bettina Looram, who has died aged 88, was the last surviving member of the Austrian branch of the Rothschild family to have grown up in Vienna before the Anschluss of 1938; 60 years later she successfully retrieved from the Austrian state a collection of artworks that the Nazis had stolen from her family and which, when sold at auction in London in 1999, fetched nearly £57.7 million, a record in Europe at that time.


Requests by Bettina Looram’s mother, Baroness Alphonse von Rothschild, and by her uncle, Baron Louis von Rothschild, for the return of their art collections in the immediate post-war years had met with only partial success. Both of them by then lived outside Austria, and the Austrian government pointed to a law passed in 1918 that banned art exports. So a deal was struck whereby the Rothschilds were permitted to take part of their collections out of the country, but only on condition that the greatest artworks were donated to the nation and kept in Austria; and there matters stood for half a century.

Then, in early 1998, perusing the newspaper while lying in bed in hospital, Bettina Looram read a report that, prompted by growing international outrage, Austria’s minister of culture had directed the country’s national museums to identify any items in their collections that had been stolen or extorted by the Nazis from the Jews. This came in the wake of a decision by a judge in New York to block the return to Austria of two paintings in a loan exhibition of works by Egon Schiele pending the resolution of claims to ownership of the pictures that had been filed by the heirs of Jews who had perished in the Holocaust.

“I thought, oh gosh. I wonder whether it’s worth having a go,” Bettina Looram recalled. “When you’re in hospital you have all the time in the world on your hands. So I rang the minister’s office. And in 10 minutes she rang back.” Subsequently, after swift changes had been made to Austria’s law, the country’s museums released some 250 items taken by the Nazis from the great Austrian Rothschild houses that Bettina Looram had known as a child. No one had supposed that these things would ever be returned to the family, least of all their rightful owners. “It’s a miracle,” she said. “I keep pinching myself.”

Keeping back only a few mementoes, Bettina Looram and her fellow beneficiaries — her two children and her late sister’s two children — consigned everything for sale at Christie’s in London. Among the treasures were portraits by Frans Hals; furniture commissioned by Louis XVI; arguably the finest long-case clock in the world; perhaps the finest pistol; and one of the greatest Flemish illuminated manuscripts ever likely to come on the market. “We don’t have the kind of houses for these things,” Bettina Looram explained. “We don’t have a Waddesdon [her great-uncle Ferdinand’s French chateau-style house in Buckinghamshire].” Yet she well remembered a time when they did. 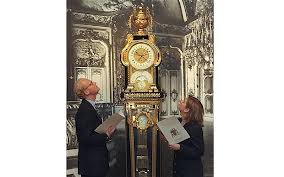 She was born Bettina von Rothschild on October 31 1924, the elder daughter of Baron Alphonse von Rothschild and his English wife Clarice, née Sebag-Montefiore. With her sister Gwendoline she grew up mostly in Vienna, her education in the hands of governesses, in the huge house built by a Rothschild great-uncle on Theresianumgasse. There were country properties too, including a hunting lodge near Vienna and, further afield, Schillersdorf, a castle and extensive estate in Silesia.

Bettina’s father Alphonse was a great-grandson of Salomon von Rothschild (1774-1855), one of the five brothers represented by the five arrows that appear in the family’s coat of arms. Salomon’s brother Nathan founded the Rothschild bank in London; his brother James set up the family concern in Paris. Carl established a Rothschild presence in Naples, while Amschel, eldest of the five, ran the family counting house in Frankfurt, where the brothers had grown up in the ghetto and where their father had prospered as merchant, moneylender and court agent to the immensely rich Landgrave of Hesse-Cassel.

Salomon opened the family bank in Vienna, SM von Rothschild, in 1820, and it was in recognition of the Rothschilds’ importance as financiers to the Austrian state that in 1822 Salomon and his brothers were ennobled by Emperor Francis I. Salomon went on to play a leading role in the development of Austria’s railways and industry. His son, Anselm, who married an English Rothschild first cousin and from 1848 ran the Vienna Rothschild bank, had an eye for beautiful things and amassed a collection of some 600 works of art and paintings, which on his death passed to his three sons.

Ferdinand, the second of Anselm’s sons, moved to England, married an English Rothschild cousin and created Waddesdon Manor, while his brothers, Nathaniel and Albert, remained in Austria. Albert in due course succeeded his father as head of SM von Rothschild, leaving Nathaniel to concentrate on collecting, cramming the house he built on Theresianumgasse with valuable objects. Albert bought things too, a portrait by Frans Hals for example, to add to the contents of the palace he commissioned from Hippolyte Destailleur (also the architect of Waddesdon) at 24-26 Heugasse.

Both Ferdinand and Nathaniel died childless, and many of their treasures passed to Albert, and from him, on his death in 1911, to his sons Alphonse, Louis and Eugène. Alphonse took over the house on Theresianumgasse where Bettina would grow up; Louis, who now ran the bank, the palace on Heugasse. Among the rural properties was a large tract of mountainous, wooded land in Lower Austria, acquired by Albert as a sporting estate, spanning the localities of Waidhofen, Gaming, Göstling, Hollenstein and Langau. Alphonse inherited Gaming and Langau, Louis the other three. 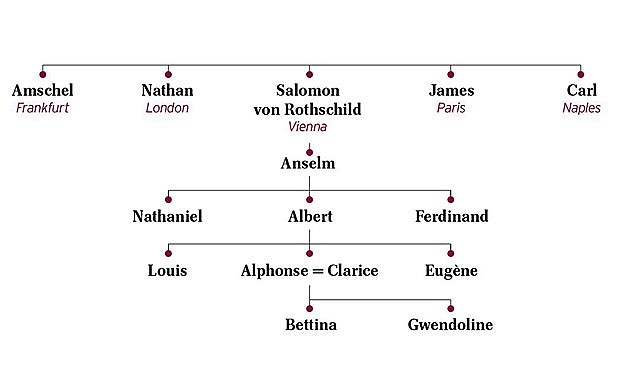 The pre-war years were not easy for the Austrian Rothschilds. As well as running the family bank, Louis was the chairman of the Creditanstalt, Austria’s largest bank, which collapsed in 1931. As a matter of honour, the family and English and French cousins contributed huge sums of money to help meet the Creditanstalt’s liabilities. Then came the Nazis. When, immediately after his abdication in 1936, the Duke of Windsor was staying with Eugène at Schloss Enzesfeld in Lower Austria, he is said to have discussed with his host the idea for a book about the persecution of German Jews.

At the time of the Anschluss in March 1938, Bettina’s parents and uncle Eugène were out of the country. Eugène was in Paris; Alphonse and Clarice had just gone to London to attend an exhibition of stamps to which Alphonse, an avid philatelist, had lent some items.

Having left Bettina and Gwendoline behind at home, on March 11 they telegraphed to Vienna instructing their staff to take the girls to Switzerland without delay. The party had got as far as Innsbruck when, at 6am on March 12, they heard the order “All Jews off the train” screamed from the station platform.

Bettina, then aged 13, thought they must be done for. “They took us to the police station and put us in a cell,” she recalled. “I knew we just had to keep going. We played word games until four in the afternoon. And then they opened the door and said we could go. We were very relieved — and the nannies were hysterical of course.” The release of the party, it later became clear, was the result of the arrest by the Gestapo of a much bigger fish, the girls’ uncle Louis, who had been trapped in Vienna and was to be held in custody — pending payment of an enormous ransom — for more than a year.

In the meantime the Germans dispossessed the Rothschilds of all their property as quickly as they could. The finest artworks were put into a special “Führer Reserve”, earmarked for the great museum Hitler intended to establish at Linz. Attempts by Lord Duveen to buy Alphonse’s collection, possibly on behalf of the rightful owners, came to nothing. Subsequently, during the war, all the Rothschild works of art were stored for safe keeping in salt mines at Alt Aussee — which by a stroke of good fortune was to end up in the American, rather than the Russian, zone of occupation after the conflict was over.

It was to America that in 1940, the year of France’s capitulation to Hitler, Baron Alphonse took his family to live. With Bettina and Gwendoline, he and Clarice (who luckily had taken her jewels with her to the stamp exhibition in London) left Europe for an apartment on Park Avenue, New York. Louis and Eugène also made their way to America, and several French Rothschild cousins arrived in the city at the same time, a few months in advance of Marshal Petain’s decree confiscating all Rothschild property in France. Alphonse died in America in 1942, and the next year Bettina married Matthew Looram.

A Harvard graduate, Looram was then serving in the US Army, 13th Airborne Division. After the war, mostly spent on service in Europe, he was to join the US Foreign Service, with postings that took him and Bettina to Rome, Paris, Asmara (Eritrea) and Washington, where they had a house in Georgetown. In 1969 Bettina Looram found herself wife to the US ambassador in Dahomey (now Benin), and in 1972 filled the same role in Somalia, where the Loorams were menaced by “Black September” terrorists. Meanwhile, Bettina’s mother had staked her claim to the Austrian Rothschild art collection, and had also reclaimed an estate.

The restitution campaign had begun in 1947, when Bettina Looram accompanied her mother and uncle Louis to Vienna, to see what could be salvaged of their former property in Austria. The palaces had been occupied by the Gestapo — Bettina noticed bloodstains on the walls of her old nursery — and their old owners did not want them back. Clarice and Louis sold them to a trade union “for nothing”, Bettina recalled: “They wanted to get rid of them.” As to his alpine lands at Waidhofen, Göstling and Hollenstein, Louis gave them to the Austrian state, on condition that it used the proceeds to fund pensions for his former employees.

Clarice, on the other hand, kept Alphonse’s 30,000-acre estate at Langau, although because it was in the Russian zone she was unable to return there with her family until 1952. It was a happy decision, and in the mid-1970s Bettina and Matthew Looram retired there to live in a house that they built for themselves. “The bank has gone,” Bettina reflected in the 1980s. “Schillersdorf, the other fine castles, the Viennese town houses, all have gone. Only beautiful Langau is left, the place that Grandfather Albert loved and which still has a high place in the affections of his youngest descendants.”

Matthew Looram died at Langau in 2004. Bettina Looram is survived by their son and daughter.