Jacksonville museum pieces actually Nazi loot; owner to get them back 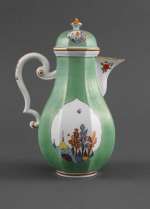 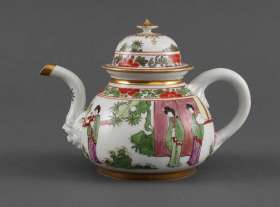 They were part of the loot plundered by the Nazis in World War II from a prominent German banker and collector and thought to be gone for good.

Now a delicate porcelain coffee pot and teapot will go back to Gustav Von Klemperer’s descendents 47 years after collectors Ralph and Constance Wark donated them to Jacksonville’s Cummer Museum of Art & Gardens.

But to help others learn about how much art was heisted by the Nazis, the family has agreed to let the pots remain on display in the Cummer through next September.

“Too often museums who do the right thing may quietly take a piece off the wall and don’t tell the story, and that was very important to us,” Cummer chief curator Holly Keris said. “This in no way damages the quality of the collection he [Wark] assembled or calls into question his own scruples in collecting. This was something that was happening at the time, and this is an important story people were not aware of.”

The Cummer’s permanent collection of almost 5,000 objects has been on display at its Riverside Avenue facility since 1961. But decades before, the Nazi regime pillaged more than 20 percent of Europe’s art from homes and museums between 1933 and 1945, according to the National Archives. Some was sold to fund the war effort, while others just disappeared.

Thousands of stolen artworks have been recovered since, but at least 100,000 were still missing as of the late 1990s, according to the National Archives. Museums and collectors’ descendants are still seeking them, and that’s what happened at the Cummer.

Meissen was the first European manufacturer to create the kind of porcelain that had been crafted in the Far East since the 7th century, Keris said. The 800 Meissen pieces in the collection of Von Klemperer, Jewish chairman of the Dresdner Bank in Dresden, was regarded as one of the most significant collections.

The family fled Germany without the collection just after the Nazis’ persecution of Jews in 1938, and German soldiers seized it.

The Warks never knew the pots had been stolen. Their records showed one was bought from a dealer and the other from a museum in Dresden, Keris said.

“Most people didn’t know that it was plundered,” Keris said.

Von Klemperer investigators tracked the pots to the Cummer in 2010. The museum asked if they could be kept on display for a while as part of a display on Nazi art theft and recovery, and the family agreed this month.

The pieces will get a separate display with information on their history, theft and recovery. A free seminar on Nazi art looting will be at 7 p.m. Nov. 6 at the Cummer at 829 Riverside Ave., with more educational sessions planned.