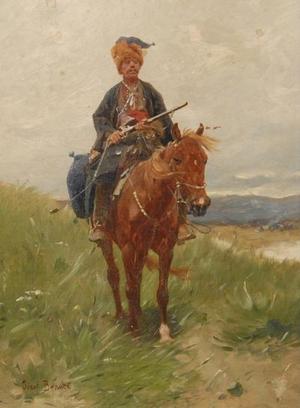 Allyson Lee of Millis knows that every painting tells a story — but sometimes it’s the story behind the painting that matters most.

“The painting went into our online catalog (for an upcoming auction), and it was a couple of days before the Polish Embassy contacted us to say it possibly was the one that had been looted in 1944,” Lee said. “This was the first time we’ve had this happen.”

The small canvas painting, titled “Watch,” or “Czaty” in Polish, depicts a Polish Cossack soldier standing watch on a horse. It belonged to the Zacheta Gallery of the Society for the Encouragement of Fine Arts in Warsaw before it was transferred to the National Museum in Warsaw for safekeeping in 1939.

Thousands of works of art were destroyed or looted during the Warsaw Uprising of 1944. But many, like “Watch,” were documented before being stolen.

A conservator of the National Museum of Warsaw visited Grogan & Co. on May 31, and spent three hours examining the painting before she concluded that it was indeed “Watch.”

“They notified Homeland Security and said it would be collected by an agent,” Lee said. “But my clients decided we should bring it to D.C. to do it nicely instead of having it seized, so I acted as a representative to nicely hand the painting over to say ‘Here you go, this is yours.’”

With the coordinated efforts of the Ministry of Culture and National Heritage of the Republic of Poland and U.S. Immigration and Customs Enforcement, Lee returned the painting on June 15 to Bogdan Zdrojewski, Poland’s minister of culture and national heritage.

She acted on behalf of her clients who were in possession of the painting, as they wished to remain anonymous.

The ceremony took place at the Embassy of the Republic of Poland in Washington, D.C., and was attended by Polish Ambassador Robert Kupiecki.

“The Embassy of Poland in the United States is thrilled that thanks to our work, many of Poland’s treasures are returning home. We hope that the recovery of Jozef Brandt’s “Czaty” thanks to the excellent cooperation of Grogan and Co.’s Allyson Lee will set an example for others to follow.

Lee said she was happy to help.

“It was an incredible experience to sit with the ambassador and have him describe it from a historical perspective, that it’s a very important painting to the people of Poland. It wasn’t about the value of it, it was the meaning,” Lee said. “They lost so much that wasn’t recovered, so every small piece is important to them. They were so appreciative and overwhelmed to have found this piece, and to have our clients not drag this through the court system.”

Lee said there were 500,000 pieces of art taken from families and museums in Poland during World War II and never recovered. Many of these pieces are beginning to surface, however, as technology allows officials to browse online catalogs for missing art.

“As the generation of soldiers who were in World War II are starting to pass away and things are being inherited, more pieces are coming to the surface,” Lee said. “No one in the family knew that it was looted, and we don’t even know the family who it came from. My clients acquired it at an estate sale in New Hampshire from a man who inherited it from his grandpa. … No one knows how it got here in the U.S., and since it’s so common for family to inherit it, they don’t hold the people liable.”