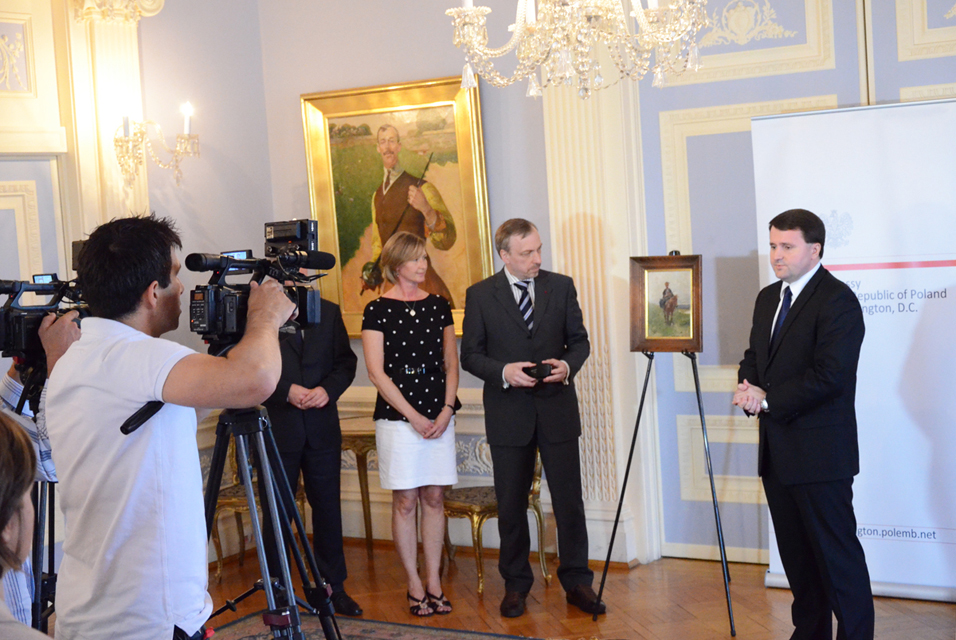 Polish Ambassador Robert Kupiecki addresses the Polish media after Josef Brandt’s ‘The Watch’ was returned to the Minister of Culture, Bodgan Zdrojewski on June 15th at a ceremony held at the Polish Embassy in Washington, D.C. Photo courtesy of Justine Jablonska, Embassy of Poland.

WASHINGTON, DC.- Thanks to the coordinated efforts of the Ministry of Culture and National Heritage of the Republic of Poland, ICE and a local auction house, a 19th century painting by Polish artist Josef Brandt, looted during the Second World War, is due to return to the National Museum in Warsaw, Poland. On June 15th, 2012, the painting was handed over to Bogdan Zdrojewski, Poland’s Minister of Culture and National Heritage, by Allyson Lee, a representative of Grogan and Company Fine Art Auctioneers, acting on behalf of their client. The ceremony took place at the Embassy of the Republic of Poland in Washington, DC, and was attended by Ambassador Robert Kupiecki.

The painting by Józef Brandt, titled “Watch” (“Czaty”), belonged to the collection of the “Zachęta” Gallery of the Society for the Encouragement of Fine Arts in Warsaw since 1913. The painting was part of the permanent collection of the Gallery until 1939 when German occupational authorities transferred it to the National Museum in Warsaw. Tragically, thousands of the Museums works of art were destroyed or looted during the Warsaw Uprising of 1944. The small oil on canvas depicting a Polish Cossack soldier on watch, was photographed and well documented by the Museum prior to being looted and was therefore, registered on several looted art databases. How the painting arrived in the United States is a mystery to everyone, including the previous owners, who wish to remain anonymous.

The painting was consigned to Grogan and Company’s recent May 20th auction, however, was quickly recognized by Polish officials as possibly matching the painting looted in 1944. The Embassy of the Republic of Poland in Washington, DC, the Ministry of Culture and National Heritage and Special agents from ICE and Homeland Security, contacted Grogan and Company and requested the painting be withdrawn from the auction. The owners of the painting were notified and agreed to allow Polish experts to examine the painting. On May 31st, Dr. Mariusz Klarecki, the expert on works by Josef Brandt, and Ms. Anna Lewandowska, a conservator of the National Museum of Warsaw, visited the gallery in Dedham Massachusetts to examine the painting. After three hours of thorough examination, the experts concluded that the painting was in fact the same painting by Brandt that was looted during WWII and previously held by the “Zachęta” Gallery. After receiving evidence to confirm that the painting is a Polish war loss, the owners decided to authorize Grogan and Company to return the work to Poland.

At the press conference following the hand over ceremony, Minister Zdrojewski explained the historical importance of the painting to the people of Poland. Brandt, an engineering student and painter by hobby, studied in Warsaw at the Noblemen’s institute and went to Paris in 1858 to study at the Ecole centrale. Juliusz Kossack, a Polish artist living in Paris at the time, recognized Brandt’s talent as a painter and persuaded him to abandon engineering. Like Kossack, Brandt’s paintings focused on Poland’s 17th century military history including the Tatar War, the Polish-Ottoman War and the Great Turkish War. This is only the second recovered painting out of seven works by Józef Brandt listed in the catalogue of Polish painting lost during wartime.