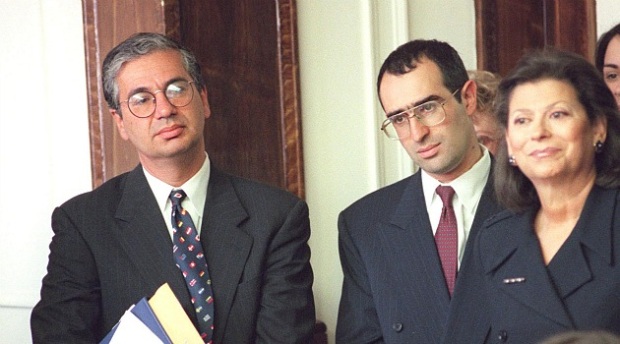 Immediately after Elan Steinberg died early on April 6 at age 59, those who understood the tremendous historical role he had played spoke about what he had meant to them and to the Jewish community. Calling him “One of the great Jewish activists of the past decades,” World Jewish Congress President Ronald S. Lauder described him as “probably the most gifted communication professional in the Jewish organizational world.” Remembering Elan as “a friend and an ally,” Nobel Peace Prize laureate Elie Wiesel said that “whenever Jews were in danger or Jewish honor offended, he vigorously yet elegantly spoke up. Whenever Jewish memory was attacked, he attacked the attacker.”

For more than 25 years, Elan fought for Jewish rights throughout the world as one of the key leaders of the WJC, which he first joined in 1978 at age 26 as the organization’s representative at the United Nations. Then, as the WJC’s executive director, he was the political strategist behind many dramatic and unprecedented initiatives to force the international community to confront unresolved and often unacknowledged vestiges from the Holocaust. These included the successful campaigns to obtain billions of dollars in restitution for Holocaust survivors from Swiss banks, European governments and insurance companies, among others, that had profiteered from the persecution and annihilation of European Jewry during World War II. He also led the WJC campaign to unmask Austrian politician and erstwhile U.N. Secretary General Kurt Waldheim for being a former Nazi who had lied about his military affiliation.

The son of Holocaust survivors, Elan was born in Rishon LeZion, Israel, on June 2, 1952. His worldview was shaped by a lifelong Zionism, an unwavering dedication to Holocaust remembrance and a fierce insistence that the survivors were entitled to not just symbolic but also actual justice and, above all else, to respect and dignity. Elan had a brilliant, inquisitive Renaissance-like intellect over a broad range of often unexpected disciplines. He could speak authoritatively about history, politics, philosophical and theological quandaries such as Pascal’s Wager, sports culture and the latest often absurd revelations in the New York Post’s Page 6.

A man of absolute integrity, he categorically refused to compromise on matters of principle, often at significant personal and professional cost. He could be a sharp-tongued opponent. When a prominent New York law firm proclaimed that it had agreed to give “strategic advice” to a leading Swiss bank accused of laundering millions of dollars of assets stolen from Jews by Nazi Germany in order to help the bank “determine what the truth is — what really happened,” Elan countered that the law firm was only representing the bank “to make a buck. Any suggestion that they’re doing it for any other reason is nonsense, pure baloney.”

In 2007, a former arbitrator for the International Commission on Holocaust Era Insurance Claims alleged that he had been pressured to reject claims by one of ICHEIC’s administrators. Elan, who had been a commissioner until 2004, was outraged. “There should be no statute of limitations on justice,” he said. “There is no question in my mind that these issues, which touch on the moral and ethical obligations we have to our Holocaust martyrs, must remain open.”

One of my favorite Elan stories is about the time the French minister of culture, with whom he was negotiating for the return of several thousand paintings that had been looted from Jews during the Holocaust, told him, “You don’t know anything about art.” Unfazed, Elan replied: “You’re right. I don’t know anything about art. But I’m from Brooklyn. I know stolen goods.”

We first met in 1980, during the preparations for the following year’s World Gathering of Jewish Holocaust Survivors in Jerusalem, and soon discovered that we had a lot in common, not least a similarly irreverent sense of humor and an instinctive desire to bypass conventions in order to get a job done. We were friends for 32 years, and I was privileged to experience firsthand his unshakeable loyalty. Our converging paths and shared mission led us to meet over the years in New York, Jerusalem, Washington, Tel Aviv, Los Angeles, Moscow, Oslo, Berlin, Warsaw, Budapest and even Petra, Jordan, where we worked together on an international conference of Nobel laureates on behalf of the Elie Wiesel Foundation for Humanity.

After he left the WJC in 2004, he became a vice president of the American Gathering of Jewish Holocaust Survivors and Their Descendants, and we served together on its executive committee. We used to speak almost daily, sometimes several times a day, our conversations ranging from Jewish politics and issues of concern to the survivor community to anything and everything that affected our families and ourselves.

His office was at a Starbucks. Literally. Having set himself up at a table with his iPad and multiple cell phones, he would talk or email with reporters, lay leaders and senior officials at a host of Jewish organizations — all of whom sought his advice or wanted to share information — and, always, to his family and friends. His priorities were never in doubt. He would interrupt any conversation to take a call from one of his children. He gave them his undivided attention, answering their questions or just enjoying their latest news.

His wife, Sharon, and his children, Max, Harry and Lena, were simultaneously the core and the motivating force of his existence. There was nothing Elan would not do for them, and their unconditional devotion to him was clearly evident during his illness. For the two months Elan spent in the hospital after being diagnosed with lymphatic cancer, Sharon did not leave his side. She gave him not only strength, but also a constant reassurance that he was not alone, that he would never be alone. And his children were there throughout, making sure he knew how much and how deeply they loved him. Their presence always made him smile, and perhaps it enabled him to forget, however briefly, about his pain and his fears.

Elan was a blazing comet who taught us the conscience-based imperatives inherent in our moment in history. Even during his final weeks, he remained engaged and wanted to be involved, to make a difference. The road ahead will be intellectually and spiritually impoverished for his absence. We will not forget him.

Menachem Z. Rosensaft is the general counsel of the World Jewish Congress and vice president of the American Gathering of Jewish Holocaust Survivors and Their Descendants. He teaches about the law of genocide and World War II war crimes trials at the law schools of Columbia, Cornell and Syracuse universities.