Italy in unfamiliar role in seizure of 'Christ Carrying the Cross'

The work by Renaissance master Girolamo Romanino was seized by U.S. authorities while it was on loan to a Florida museum. Paperwork protecting it had not been filed. 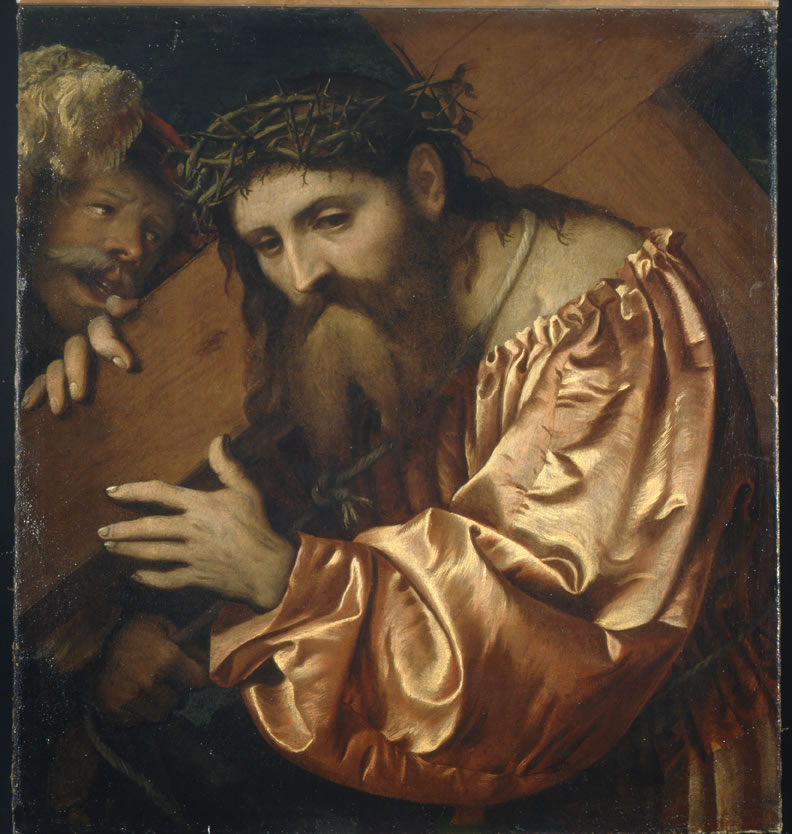 The Italian government has been persistent, tenacious and very effective in forcing repatriation of its looted antiquities. Seizing the ethical high ground, then playing legal and diplomatic hardball, it has extracted scores of prized objects from American museums.

None was hit harder than L.A.'s Getty Museum, which has bid adieu to 40 pieces Italy was able to prove had been illegally dug from its soil.

But last week, the tables turned. This time, the Italian government was the party caught owning an ill-gotten prize, "Christ Carrying the Cross," painted around 1538 by Renaissance master Girolamo Romanino.

The Italians lost the painting through a blunder that dumbfounds experts: Before sending it to Florida for an exhibition last year, they failed to insist upon easily available protection under a long-standing U.S. law that gives foreign-owned art immunity from seizure while on loan for nonprofit exhibitions.

"Christ Carrying the Cross" had belonged to the Gentilis, an Italian Jewish family living in Paris that fled the invading Nazis. In 1941, Nazi-controlled French authorities sold the collection. In 1998, the Italian government bought the Romanino from a private owner and hung it in the Pinacoteca di Brera, a government-run museum in Milan. Italy ignored the Gentili heirs' requests for its return — unlike France, where a court ruling in 1999 prompted the Louvre to turn over five of its paintings.

"Christ Carrying the Cross" came to Tallahassee, Fla., in March 2011 along with the 49 other paintings in "Baroque Painting in Lombardy From the Pinacoteca di Brera." The show was a very big deal for the Mary Brogan Museum of Art and Science — a small institution that was putting up the first exhibition of foreign art in its 12-year history.

While the Romanino hung in Tallahassee, said Corinne Hershkovitch, attorney for the Gentili heirs, a staff member from Christie's auction house — which had helped the Gentilis sell the paintings returned by France, including one by Giovanni Battista Tiepolo that the Getty Museum bought for $2.2 million — visited the Pinacoteca di Brera and noticed that its usual spot was bare.

A notice said it was on loan to the Mary Brogan Museum. Interpol was alerted, and soon Pamela Marsh, the U.S. attorney for the Northern District of Florida, and investigators from U.S. Immigration and Customs Enforcement were on the case.

At first they feared they would not have a case.

Since the 1960s, the Immunity From Judicial Seizure Act, intended to promote a rich cultural exchange with other countries, has specified that foreign-owned artworks lent for nonprofit exhibitions in the United States can't be confiscated, period.

But to gain the protection, U.S. institutions hosting foreign artworks need to apply for a certificate from a State Department office that administers the immunity act.

Nobody at the Tallahassee museum was experienced in such matters, and it was coping with financial troubles that would force it to close in January, with hopes for an eventual restructuring and revival. The Romanino was fair game.

"We would not have been able to touch it had the paperwork been filed," prosecutor Marsh said. She sued to confiscate the painting, having alerted the Italians of their right to contest the case. They didn't file a single document, and on April 18 it was returned to the Gentili heirs in a ceremony in Tallahassee. They had it trucked to New York City, where Christie's will auction it June 6, with an estimated price of $2.5 million to $3.5 million.

Chucha Barber, the Brogan Museum's former chief executive, and Ilaria Niccolini, a promoter of cultural exchanges between Italy and the United States who helped organize the show, say they're embarrassed by their lapse concerning the certificate but pleased that justice has been done. Both say it's bewildering that Italian officials didn't alert them to the need for an immunity certificate — or insist that one be provided before the paintings left Milan.

The Italian Embassy inWashington, D.C., declined to comment about the episode; the Pinacoteca di Brera and the Italian culture ministry's press office have not responded to emails.

Patty Gerstenblith, director of the Center for Art, Museum and Cultural Heritage Law at Chicago's DePaul University, said "it's fairly shocking that this would happen in this day and age," because obtaining legal immunity has become practically mandatory among foreign lenders since 1998, when Egon Schiele's unprotected painting "Portrait of Wally" was seized from a show at New York's Museum of Modern Art.

Niccolini said the Italian museum and cultural officials she spoke with were livid after "Christ Carrying the Cross" was seized. She said they had assumed Italy's strong laws shielding government collections would protect it from seizure elsewhere.

Niccolini thinks that Italy didn't fight the seizure in court for economic reasons — and because it didn't want to be branded a hypocrite. The moral high ground it enjoys in its fight to repatriate looted antiquities might crumble a bit were it to be seen clinging to a painting stolen during the Holocaust.

But Barber, the former Brogan Museum chief, says it's hard for her to conceive of this simply as an accident.

"I believe somebody wanted this painting to be discovered in the United States and returned to the rightful owner," she said. Why, she wonders, did the Pinacoteca di Brera send "Christ Carrying the Cross" as the lone Renaissance painting in an otherwise all-Baroque show — then leave it unprotected and advertise its whereabouts?

"We'll never know for sure, but I don't believe in coincidences," Barber said.

Niccolini is skeptical. "But if it were true, I think it would be a very nice thing," she said. "[It would] reestablish some good faith on the Italian side in this case."