We don’t own that Modigliani

Nahmads say the contested painting belongs to another organisation 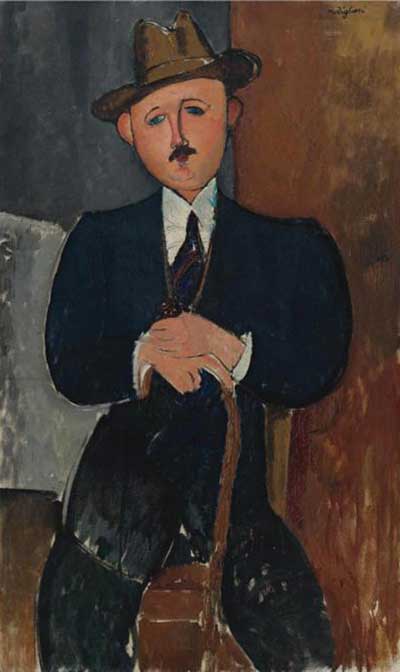 The Nahmads' lawyers say the art dealers never owned "Seated Man with a Cane" by Modigliani, above

The news that the billionaire New York art dealers David Nahmad and his son Helly were being sued for the return of a 1918 work by Modigliani allegedly looted by the Nazis made it to the British and American tabloid press in November. Now, in a legal twist, lawyers acting on behalf of the Nahmad family say that the case is unfounded because the Manhattan-based Helly Nahmad Gallery does not own the work.

In court papers, the Nahmads’ legal team says instead that an organisation called the International Art Center (IAC) possesses the piece and that “Helly Nahmad Gallery never owned the painting [which] is not in New York State… the plaintiff has sued the wrong defendant.” But lawyers for Philippe Maestracci, who is claiming Modigliani’s Seated Man with a Cane, contend that the “International Art Center is an offshore entity used by the Nahmad defendants as an instrumentality to hold their interests in works, around 90% of which are held in an art storage facility at the free port of Geneva.” They add that the art centre’s holdings are estimated at between $3bn and $4bn.

Maestracci says that the Modigliani was owned by his grandfather, Oscar Stettiner, who ran a gallery in Paris. In 1939, Stettiner fled Paris without the work; in July 1944, Marcel Philippon, who was appointed by the Nazis to sell Stettiner’s property, sold the painting. Maestracci says that he made repeated requests to the Nahmad gallery to return the piece, but received no reply.

The Nahmads bought the work at Christie’s, London, in June 1996 for $3.2m, according to the online publication Artnet. However, the court papers state: “The International Art Center purchased the painting… the painting has been openly and publicly exhibited at various museums and galleries throughout the world since 1996, when the IAC acquired ownership.” Christie’s catalogue entry states that it had previously belonged to the Paris collector Roger Dutilleul and was later sold to J. Livengood, also in Paris, around 1940 to 1945. The provenance did not indicate spoliation.

When the work was consigned for sale at Sotheby’s, New York, in November 2008, its provenance was again described as coming from Livengood but, crucially, the entry also states that the work was shown at the 1930 Venice Biennale, where it was listed as number 35 in the catalogue and entitled Ritratto d’uomo (the 1996 Christie’s entry indexes the work as number 16 in the Venice catalogue). This alerted Maestracci, who says that the biennial information provided by Sotheby’s corresponded with his own historical knowledge of the work. The Modigliani was unsold at the 2008 auction.

In his court declaration, Helly Nahmad added that “the one and only occasion the painting was in [the gallery’s] possession was when it was loaned to [the gallery] for a Modigliani exhibition entitled ‘Modigliani: a Bohemian Myth’, which opened in November 2005.” Daisy Edelson, the senior vice-president of Sotheby’s impressionist and modern art department, also attests that Seated Man with a Cane was consigned by the International Art Center in Switzerland, and not by the Helly Nahmad Gallery, for the 2008 Sotheby’s auction.

Maestracci’s lawyers argue that the centre and the Nahmad gallery are one and the same organisation, stating in the court papers that the “IAC is controlled by Helly and David Nahmad.” Raymond Dowd of Dunnington Bartholow & Miller, representing Maestracci, says: “We will resist any attempt to move this [case] to Switzerland.” Golub says: “The court will decide that question, not Mr Dowd.”