The Legacy of a Golden Instant


On a single evening in November 2006, Christie's sold nearly half a billion dollars of art, almost double the previous world auction record. Driving this sale were four paintings by Gustav Klimt that together sold to unnamed collectors for $192 million. The headlong spending spree had been occasioned by the Austrian government's restitution, just a few months earlier, of five Klimts to the heirs of Adele Bloch-Bauer (1881-1925). The fifth, one of two portraits of Adele herself, had already been separately purchased by the Neue Galerie in New York for $135 million—with funds provided by its billionaire co-founder, Ronald S. Lauder. At the time, it was the most ever paid for a painting. 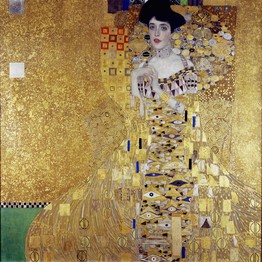 But there was something quite apart from their market value that made the Bloch-Bauer Klimts so noteworthy. Owned by a leading Viennese Jewish family before World War II and only returned to the heirs after years of litigation, they had come to represent the shameful story of art confiscated from Jewish collections by the Nazis in Austria and then tenaciously held on to by the postwar Austrian state. Yet the Christie's sale invited questions of its own. Until 2006, the five paintings had all been in Vienna's Belvedere Gallery, a national museum. Today only the Neue Galerie painting, "Portrait of Adele Bloch-Bauer I" (1907), can be seen by the public. And with the two Adele portraits separated, we have lost the rare insight that comes from seeing an artist approach the same subject at different points in his career.

Anne Marie O'Connor is not much concerned with this paradoxical denouement. Her deeply researched account of the Bloch-Bauer case, "The Lady in Gold," concentrates almost entirely on the Neue Galerie's picture—along with the Belvedere's "The Kiss" (1907), the pre-eminent example of Klimt's now celebrated gold-leaf style—and the wrenching 20th-century tragedy of Vienna's highly assimilated Jewish elite. She has constructed a sprawling "saga of loss and redemption" that is as much an impassioned elegy for a "golden instant when Vienna rivaled Paris" as a dissection of the restitution battle that led to the Christie's sale.

The case is straightforward enough: The daughter of one of the leading bankers of the Austro-Hungarian empire, Adele Bloch-Bauer was a patron (and perhaps lover) of Klimt and a fervent supporter of public museums. In 1923, two years before her death, she wrote a will expressing her wish to have her Klimts given to the Belvedere upon the death of her husband, the industrialist Ferdinand Bloch-Bauer. Following the 1938 Anschluss, however, Ferdinand's assets, including the paintings, were expropriated by the Nazis—"Aryanized"—and he fled to Czechoslovakia and then Switzerland, where he died in 1945. After the war, the Belvedere asserted title to the paintings, citing the 1923 will.

By the 1990s, however, Austria was drawing belated scrutiny for its handling of art looted by the Nazis, and, in 1998, the remaining Bloch-Bauer descendants, all living abroad, asserted claim to the five Klimts. Leading this effort were Maria Altmann, the octogenarian niece of Adele, and a crusading young American lawyer named Randol Schoenberg, who happened to be the grandson of the Austrian composer (and fellow émigré) Arnold Schoenberg. After a protracted legal battle, an Austrian restitution panel ruled in favor of the heirs in January 2006.

The Lady in Gold

It is, as Ms. O'Connor's subtitle tells us, an "extraordinary tale," and yet, as narrative, it poses challenges. A vast span of time separates the Catholic-born Klimt and his sitter, who both died well before the Nazi period, from the legal battle, which began many decades after the Nazi defeat. Ms. O'Connor makes generous use of the shimmering, if now familiar, backdrop of Secession-era Vienna to fill out her story. While the miniatures of Sigmund Freud, Alma Mahler, Arthur Schnitzler and Mark Twain (who spent two years in Vienna just before the turn of the century) can seem superfluous, the many portraits of members of the city's Jewish haute bourgeoisie deepen her account. Like the Bloch-Bauers, cultivated families such as the Loews, Zuckerkandls and Lederers collected art, and many championed Klimt's decorative, yet sexually-charged compositions.

The central and largest section of Ms. O'Connor's book is devoted to the brutal destruction of their Vienna. The rapacity with which the Nazis pursued Jewish wealth is rendered with particular force thanks to the recollections of Maria Altmann, the Bloch-Bauer niece. Just weeks after her marriage into one of the most powerful families in the city, Altmann's exquisite new apartment was seized and then occupied by Felix Landau, the Austrian Gestapo chief who had been put in charge of plundering Jewish assets. Her husband, meanwhile, was sent to Dachau—as a hostage to help the Nazis track down his brother's foreign bank accounts. He was released when his brother made a deal, and the couple later escaped and eventually settled in Los Angeles. (Maria Altmann died there in 2011.) Among Austria's Nazi elite, Ms. O'Connor suggests, material jealousy seems to have played as much a part as racist ideology.

Nazi aesthetics, however, had little patience for Secessionist art, and when museum officials were sent to inspect the Bloch-Bauer house, they ignored the Klimts. The paintings were only appropriated subsequently in a dirty deal between an illegitimate son of the artist, who had become a National Socialist die-hard, and the Belvedere, which had meanwhile been taken over by the aptly named Hitler acolyte Bruno Grimschitz. "Portrait of Adele Bloch-Bauer I" was "reinvented" as an unidentified "Lady in Gold," and the history of its subject neatly suppressed.

Klimt found posthumous celebrity after the war, and it is here that the story becomes more complicated than Ms. O'Connor allows. In 1984, the magazine Art News published an exposé of Austria's disgraceful coverup of art stolen by the Nazis, which caused an international outcry and spurred multiple investigations, culminating in a series of high-profile lawsuits in the 1990s and 2000s. It turned out that hundreds of plundered paintings and objects had ended up in Austrian museums, where they remained, and that the government had adopted a secret policy of intransigence. Adding to the injury, many of the disputed works had been painted by leading Modernists such as Klimt and Egon Schiele, whose soaring reputations (and market valuations) were being put in the service of promoting Austria's national heritage.

Though it is mentioned only in passing in Ms. O'Connor's book, this controversy came to a head in 1998, when Manhattan District Attorney Robert Morgenthau seized two Schiele paintings that had been lent by Vienna's Leopold Museum to New York's Museum of Modern Art: Heirs to the original owners had claimed them as Nazi-looted art. One of these two works, "Portrait of Wally" (1911), became a cause célèbre that was only resolved in 2010, when the Leopold Museum made a settlement with the heirs, keeping the painting in exchange for a $19 million payment and clear acknowledgment of its provenance.

It is difficult not to see the contrast between this outcome and what happened with the Bloch-Bauer Klimts. "Portrait of Wally" remains in the public domain, displayed in a prominent Austrian museum—one that, like the Belvedere, has been dogged by provenance issues—with signage that indicates its theft by the Nazis. It offers a powerful history lesson to all audiences even as it can be seen together with other important Schieles. The Bloch-Bauer Klimts—with the exception of the Neue Galerie portrait—have disappeared from public view, apparently because no museum, not even one funded by Ronald Lauder, could compete with private bidders.

Has justice been served? Ms. O'Connor, in her otherwise thorough account, might have taken up this question, since the fate of the paintings bears much on what future generations will learn about their original owners. But there is a journalistic convention at work here: Stolen art, a subject of ever-greater interest to reporters, is supposed to be appealingly black and white—in this case, a matter of "hatched-faced" Nazis and "aging Vienna belles." The art market, on the other hand, is nearly always shades of gray. Even as inflationary prices have inspired a litany of restitution cases, the extraordinary rewards they hold out to a small minority of claimants and their lawyers can preclude the kinds of remedies that truly redeem the victims and the art.

Ms. O'Connor has told an important story. Yet it is hard not to agree with the late John Updike, who upon visiting the Neue Galerie in 2007 lamented that there are "not enough" Klimts "to show the curve of a career."

—Mr. Eakin, a senior editor at the New York Review of Books, writes frequently about museums and the art market.