Looted by the Nazis, a Romanino is Returned

Thanks to a sharp-eyed lawyer and a lax Italian museum, a highly important 16th-century painting of Christ Carrying the Cross, by the Brescian master Girolamo Romanino (ca. 1484/8-ca. 1560), looted by the Nazis in World War II, has been returned to the family of its original owner. The picture had belonged to Federico Gentili di Giuseppe, an Italian Jew who had settled in France. He died in 1941, just months before the Nazi army invaded France. 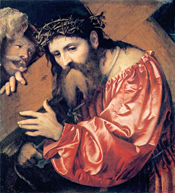 Aware of the impending catastrophe, Gentili's children and grandchildren fled the country, escaping to Canada and the United States. Other family members died in concentration camps.

The Gentili collection was plundered by the invaders and disposed of via a series of Paris sales in 1942, with several of the works finding their way to museums. Notable among them were two beautiful paintings by Giovanni Battista Tiepolo, Apelles painting the Portrait of Campaspe, acquired by the Louvre in 1950, and a sparkling sketch of Rinaldo Abandoning Armida, acquired by the Berlin Gemaldegalerie from Cailleux, Paris, in 1979 for $400,000 as a mate to a companion picture it already owned.

In 1999, a French Court of Appeals forced the Louvre to return the Tiepolo and four other works to the Gentili grandchildren, ruling that the auction of the Gentili estate in Nazi-occupied France was an illegal forced sale and a "nullity." Shortly afterwards, the Berlin Museum followed suit. The following year, Gentili heirs sold both pictures at Christie’s New York, where the J. Paul Getty Museum purchased the Apelles for $2 million (est. $1.5 million-$2 million) and the Berlin Museum smartly decided to buy back Rinaldo for $950,000 (est. $600,000-$800,000).

In 1998, the Romanino was acquired (with full knowledge of its recent history) by the Pinacoteca di Brera in Milan. The Italian government proved much less cooperative than the French and Germans, repeatedly dismissing the Gentili restitution claim. In 2004, Brera lent the picture to the “Painters of Reality” exhibition at the Metropolitan Museum of Art, and early in 2011 included it in its 50-painting loan show titled “Baroque Painting in Lombardy from the Pinacoteca di Brera” at the Mary Brogan Museum of Art and Science in Tallahassee.

The Brogan Museum was alerted of the Gentili claim, and the family’s attorney, Corinne Hershkovitch, contacted U.S. authorities, providing them with documented proof of the painting’s previous ownership. The Brogan Museum held onto the painting until Nov. 4, 2011, when the work was seized by federal officials, and held in an “undisclosed location” until its ownership was legally resolved in favor of the Gentili heirs.

While provisionally insured at Christie’s valuation of $1.2 million, the Gentili Romanino is an exceptionally fine work by the seldom-encountered artist. The last notable Romanino on the market was a much inferior large canvas of Christ and the Woman Taken into Adultery, sold at Christie’s London in December 1996 for £309,000 ($512,502). It is exceedingly likely The Carrying of the Cross will be featured in Christie’s next Important Old Masters sale in London in July 2012.