Over 1,200 precious books, including over 1,000 volumes of texts from the royal archive, will finally return home more than 100 years after they were taken to Japan. The Cultural Heritage Administration on Monday said under an agreement between Korea and Japan which took effect on June 10, all ancient Korean books stored in Japan's Imperial Household Agency arrive in Korea on Tuesday afternoon. 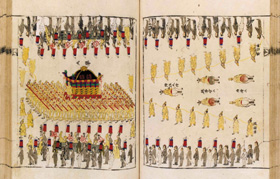 An illustration depicting the departure of a cortege from the royal text on the state funeral for Chosun Dynasty’s last empress Myeongseong. /Courtesy of Cultural Heritage Administration

Japan promised to return a total of 1,205 volumes, and Japanese Prime Minister Yoshihiko Noda brought five of them with him when he visited last month. The remaining 1,200 volumes come home Tuesday.

This completes a 16-month process after the return was announced in August 2010 by then-Japanese Prime Minister Naoto Kan to mark the centenary of Korea's annexation by Japan. But experts are not satisfied.

"It is not the end, but just a beginning of getting back looted cultural assets that are scattered all around the world. Japan took away so many of our cultural relics, not only texts but also paintings and porcelain. We should track down exactly how they were taken away and where, and continue to work on getting them back," one expert said.

The CHA will hold a ceremony at the royal shrine in Jongmyo on Dec. 13 to inform the Chosun Dynasty kings of the safe arrival of the royal archives, and display them in a special exhibition from Dec. 27 to Feb. 5.