An American university returned a 15th century painting to a Berlin museum on Monday, more than six decades after the valuable piece was stolen in the chaotic aftermath of the Second World War. 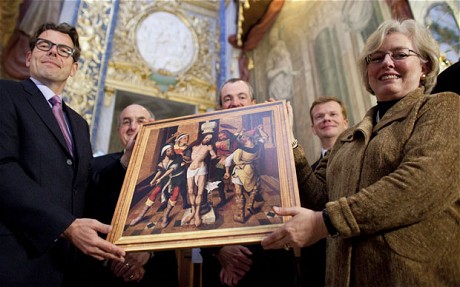 The Flagellation of Christ was one of more than a dozen paintings that disappeared from Berlin's Jagdschloss Grunewald museum during the summer of 1945, looted by British and Russian soldiers.

The painting, which originally formed a wing of an altarpiece, was later sold and ended up in the Indiana University Museum of Bloomington.

"One of the many tragedies associated with the Second World War was the loss of countless works of art that were stolen, confiscated, looted, pillaged or destroyed," Michael McRobbie, the president of Indiana University, said during a handover ceremony at the German capital's Charlottenburg Palace.

The university returned the oil-on-oak painting voluntarily to what it called "its rightful owners" after it was first contacted in 2004 by the Prussian Palaces and Gardens Foundation which oversees the Jagdschloss Grunewald museum.

The 19.7 inches x 19.7 inches (50cm x 50cm) panel, depicts Jesus, blood-covered and bound to a pillar, surrounded by four men who are beating him with whips. It was created by an unknown artist of the "Cologne School" in the 1480s. Experts consider work attributed to the artist to be the best of the period.