Earlier this month, 94-year-old Elsie Hirsch Levy received an astonishing phone call from Buettelborn, Germany, the town her family had fled during the Nazi era. The excited caller was Levy's grade school classmate, Marie Beisswenger, with whom Levy has been in frequent contact. Apparently, for seven decades, Levy has had a date with destiny. And the singular moment had just arrived. 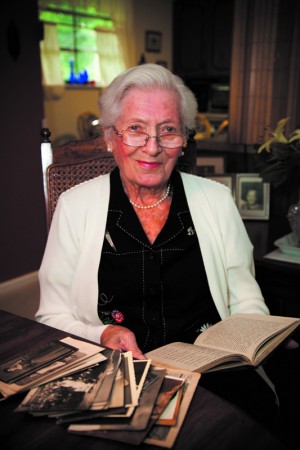 Holocaust survivor Elsie Levy, of Olivette, holds some of the family artifacts sent to her from Germany. During the Nazi era, Levy’s parents left a box of family artifacts with a neighbor for safe-keeping. The family only recently discovered the rightful owner of the contents of the box.

In 1941, before Levy's parents were deported by the Nazis to Theresienstadt, a concentration camp in Czechoslovakia, a fellow neighbor named Marie Specht had received a box from them for safekeeping. 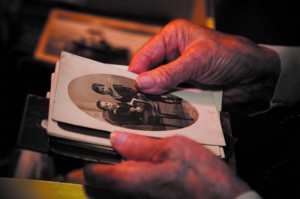 Specht passed away in 1987, leaving "The Box" in the hands of her daughter, Irma Bund, and her family. In it, the Bunds found some two-dozen photographs and a set of Hebrew-German makhzorim (prayer books) printed in 1907 and dedicated to different holidays of the Jewish calendar. Interested in seeing these artifacts returned to their owner, Irma's son, Axel, went about trying to fulfill this mission.

Addresses and persons named on the back of the photos, including Elsie Levy's grandfather, Abraham Bruchfeld III, led Axel to Joachim Hahn. Hahn is the author of numerous books on the Jews of southern Germany, a leader in Christian-Jewish relations and webmaster of a Jewish-German history website. 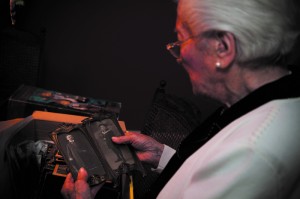 Elsie Levy, herself, planted the trail from Joachim Hahn. In 1988, after much soul-searching, Levy was convinced by her late husband, Carl, who "always had Germany in his head" to attend a Buettelborn commemoration for victims on the 50-year anniversary of the Kristallnacht Pogrom (when synagogues, Jewish homes and businesses and Jews themselves were assaulted throughout Germany and Austria). Hahn had acquired the memorial book from the event, which included an interview with Levy about her Bruchfeld-Hirsch family history. Hahn's website subsequently included some of that information.

After Axel Bund contacted Hahn, he in turn reached out to the mayor of Buettelborn to see if he could help find someone who could identify the people in the picture. The mayor visited the elderly Beisswenger, Elsie Levy's good childhood friend, and showed her the black-and-white, family portrait photographed in 1919. Beisswenger immediately recognized the adults in the photo as Levy's parents, Leopold and Johanna Bruchfeld Hirsch.

On May 17, Levy, a resident of Olivette, and a 2010 Unsung Hero of the Jewish Light, was at her door, shaking with emotion as she signed for The Box. It seemed to have finally reached her through the magic of the Internet and the compassion of strangers.

When the 21-year-old Levy and her two brothers had said good-bye to their parents to come to America in 1938, Levy was confident her entire family would soon be reunited here. But then in 1941, she and her brothers received crushing news: their mother had been granted a visa, but on account of ill health, their father's had been denied.

Levy received one letter from Theresienstadt, and then "we never heard from them again."  Inquiries by the Red Cross on Levy's behalf proved that her parents were later murdered at Auschwitz.

Hahn said the Bunds almost couldn't believe that a daughter of the Hirschs still lives in the States. "They always hoped that somebody of the family [would some day] get The Box," Hahn said.

Hahn commenting about the Bunds' reaction to their successful investigation, said they were very happy. "They almost couldn't believe it, that a daughter of the Hirschs still lives in the States."

Axel Bund, who said he is a customs officer at the Frankfurt Airport, said he is disturbed when during his interactions with strangers from "from all over the world," the word Nazi rises easily to their lips. For Bund and his parents, it is a matter of conscience to honor the German-Jewish past. "The Jews were Germans [fundamentally equal in every way to non-Jews]" he said.

The Box has stirred gratitude for "good German people," which Levy has expressed by phone to Irma Bund. By the same token, the family artifacts have also revived bitter memories of Germany and sparked tears over her parents' execution for the "crime of being Jewish."

The nine prayer books are slightly more than pocket sized, with lavish, gilt artwork on the spines and covers. Dr. Ethan Schuman, local dentist and chazzan (cantor) at Nusach Hari B'nai Zion Congregation, from a digital image, recognized the "beautiful makhzorim" as a publication of "the famous house of Roedelheim near Frankfurt." Schuman, who grew up in a shul that used Roedelheim siddurim," said their style and quality is unmistakable.

Elsie Levy believes that including the prayer books in a box of treasures was her parents', eleventh-hour act of reverence-to keep holy texts from being desecrated. She considers the books and family photos a legacy of the two things her parents held most precious and irreplaceable.