BLOOMINGTON, Ind. -- More than 60 years after it disappeared from a Berlin museum in the chaotic aftermath of World War II, a painting depicting the flagellation of Christ will return home. 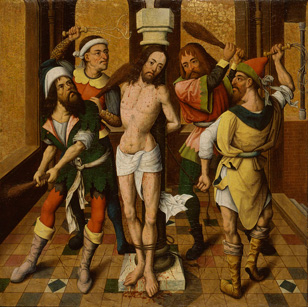 The Indiana University Art Museum will return the painting to the Jagdschloss Grunewald in a ceremony Nov. 21 at Charlottenburg Palace in Germany.

Created by a Cologne master, the Flagellation of Christ dates to the late 15th century and originally formed part of a wing of an altarpiece. It was one of more than a dozen paintings that disappeared from the Berlin museum during the summer of 1945, looted by Russian and British soldiers.

The IU Art Museum acquired the painting in 1985 as a gift from former IU President Herman B Wells. IU officials said Wells purchased the work in good faith from a London art gallery in 1967.

Wells had a long history with Germany, serving as cultural affairs adviser to the military government there in 1947 and 1948 as part of the Marshall Plan to rebuild Europe. He also helped establish the Free University in West Berlin.

"Indiana University is very pleased to restore this outstanding work of art to its rightful home in Berlin," said IU President Michael A. McRobbie. "All institutions worldwide have a moral responsibility to repatriate property of any kind, like this painting, that can be proved to have once been the property of people or institutions in Germany but removed in the aftermath of the tragedy of WWII -- irrespective of whether this is legally necessary. Indiana University in particular believes this is a fundamental responsibility we have as an educational and research institution that has been guided for decades by the spirit of global cooperation and partnership. That spirit is exemplified by IU's legendary 11th president, Herman B Wells, who initiated our longstanding relationship with the city of Berlin and its people."

"I am pleased that this panel has returned to Berlin. I know this is what Dr. Wells would have wanted, and it is in his spirit and name that it goes back to its rightful home," IU Art Museum Director Heidi Gealt said. "The small panel depicting Christ's sufferings meant a great deal to Dr. Wells as he grew older and more frail. I remember him in his wheelchair coming to the Art Museum to gaze at it. His own infirmities made him, I suspect, identify with the Christian emblem of endurance. He would be very happy to know that this precious treasure has been returned to the city he loved so much."

McRobbie, Gealt and a contingent of university representatives will travel to Germany for the Nov. 21 ceremony to officially return the painting to the Foundation for Prussian Palaces and Gardens, the organization that administers Berlin's palace museums.

In 1821, Solly sold his collection of approximately 3,000 paintings to King Friedrich Wilhelm III of Prussia. That collection served as the foundation for the Royal Gallery at Berlin, which opened to the public in 1830.

An 1883 inventory showed the panel was housed at the Berliner Schloss, the Berlin city palace, and in 1932 was moved to the Jagdschloss Grunewald, a royal hunting lodge on the outskirts of Berlin. Built in the 16th century, the Jagdschloss is the oldest surviving palace in Berlin. It began operation as a state-run museum in 1932.