For many museums, the prospect of a United States attorney swooping in to seize a painting on loan from a foreign institution on suspicions that it had been looted by the Nazis would be a potential public relations and diplomatic nightmare. 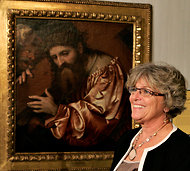 Chucha Barber of the Brogan Museum with Girolamo Romano's “Christ Carrying the Cross Dragged by a Rogue.”

For the Mary Brogan Museum of Art and Science in Tallahassee, Fla., it has been a fund-raising opportunity.

The museum was in the middle of a do-or-die campaign to raise $500,000 in July when Pamela Marsh, the United States attorney for the Northern District of Florida, ordered the Brogan to hold onto a 16th-century painting on loan from an Italian gallery because it might have been stolen from a Jewish family during World War II.

Recognizing a chance to raise its profile and attract donors, the Florida museum trumpeted the news on its Web site with the headline “The Brogan Museum at the Center of International Intrigue.”

The rest of the works from a 50-piece exhibition of Baroque painting in Lombardy went back in September to the museum that lent them, the Pinacoteca di Brera in Milan, while the work in dispute, Girolamo Romano’s “Christ Carrying the Cross Dragged by a Rogue,” from 1538, remains on the Brogan’s third floor until its ownership is settled.

“The Barbie’s Dream World for me would have been that the case unfolded while I had the whole exhibition on the third floor,” said Chucha Barber, the Brogan’s chief executive. Still, she said she hoped the flush of publicity might attract desperately needed donors.

“I only have to strike a chord in one person,” she said.

Italian officials in Rome are now negotiating with the family of Giuseppe Gentili, which says the collaborationist Vichy government in France seized the painting and sold it at auction in 1941. The Baroque exhibition, which closed last month, was the first time the Milan gallery, which is run by the Italian government, had agreed to lend an entire collection to an American institution.

Ms. Barber said she was told not to return the painting until the dispute was resolved. A spokeswoman for Ms. Marsh said the United States Attorney’s Office could not comment on an investigation.

“There were three possibilities,” Ms. Barber explained. The United States attorney could have taken custody of the painting and put it in storage; the United States customs service could have seized it as stolen property; or the Brogan itself could have renegotiated its contract with the Pinacoteca to continue to display the painting, which is ultimately what occurred.

Actually, there was a fourth possibility of which the Brogan officials were unaware: asking the State Department to declare the museum immune from any seizure order. The existence of this escape hatch has served to defuse fears among American museum curators that works they have borrowed could be seized, legal experts say.

Given how unusual this sort of situation is, the museum’s ignorance of this option is understandable, said Jennifer Anglim Kreder, co-chairwoman of the American Society of International Law’s Interest Group on Cultural Heritage and the Arts. She said she was aware of only one other instance in which a United States attorney tried to seize an artwork involved in a Holocaust-related dispute that was on loan to an American museum.

In that episode, the United States attorney in New York seized “A Portrait of Wally,” by Egon Schiele, which had been lent to the Museum of Modern Art by an Austrian museum. The case was finally settled in 2010 after more than a decade of legal wrangling, with the Austrian institution, the Leopold Museum in Vienna, keeping the painting and agreeing to pay the original owner’s family $19 million.

“I was a very naïve museum director,” Ms. Barber acknowledged. “But our naïveté probably worked to our advantage in that the painting is still here and that people will come see it. And it certainly worked to the family’s advantage.”

Nearly 23,000 visitors made their way through the Brogan for the Baroque exhibition during its run. Ms. Barber said that even before the recession, the museum had been in financial difficulty. “We’ve just cut and cut and cut,” she said, noting that without additional donations, the museum is in danger of closing.

The Romano painting, which opened both the show and the accompanying catalog, was insured for about $2.3 million, Ms. Barber said.

The dispute has chilled the Brogan’s relations with the Pinacoteca. “They’re only mad at us because we talked to the press,” Ms. Barber said. “The reality is that they would have preferred that we never say anything to anybody.”

In an e-mail, Sandrina Bandera, the director of the Pinacoteca, declined to comment, referring questions to the Italian Culture Ministry.

A spokesman for the ministry said only that officials there and at the Italian Attorney General’s Office were in contact with officials in Florida and with the American Embassy in Rome “to determine a solution that will be mutually satisfactory to both sides.” The Pinacoteca acquired the painting in 1998.

Ms. Barber said that after hearing from the United States attorney, she spoke with Lionel Salem, who lives in London and is one of Giuseppe Gentili’s grandchildren. He has doggedly tried to recover the family’s property since Mr. Gentili died and his children fled Paris to escape the Nazis. After extended legal battles, Mr. Salem has managed to reclaim five paintings from the Louvre, as well as money that Mr. Gentili deposited in a Swiss bank during the war.

Ms. Barber said that Mr. Salem had told her that he had contacted the Pinacoteca about “Christ Carrying the Cross” roughly 10 years ago, but never received a reply.

Mr. Salem said he was declining press interviews during the negotiations.

Ms. Barber noted that the Italian government had used legal tactics and public pressure to get American institutions like the J. Paul Getty Museum in Los Angeles to return stolen antiquities, adding, “It’s kind of interesting how the Karmic wheel turns.”