The question of wartime looted art remains an emotional yet complicated and legally fraught issue. 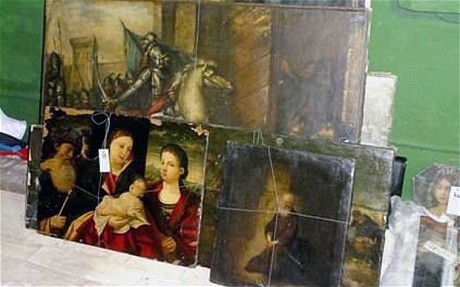 Some of the paintings discovered in the outhouse

When German tanks rolled into Poland in September 1939, from day one Nazi forces indulged in looting on massive and systematic scale. Poland alone lost an estimated 516,000 items, about 43 per cent of its cultural heritage.

Some of the plundering was designed to provide German museums back home with new collections. But other times the art was taken to furnish the private collections of leading Nazis. Herman Goring, the Luftwaffe chief, for example, amassed a huge collection of some 2,000 paintings of which 50 per cent were stolen.

Thousands of items disappeared in the war, never to be seen again. While some of the missing works were destroyed in the fighting there have long been rumours of secret stockpiles of looted art, hidden by the Germans as the Allies advanced.

Since the war countries like Poland have made strenuous efforts to recover their property, and while they have often been successful recovery can be a fraught procedure.

In some cases, especially for works that belonged to Jews murdered in the Holocaust, just who owned what can be legally difficult to prove. Along with the owners, the war also claimed ownership records leaving claimants with little more than family memories as evidence that a painting once belonged to them.