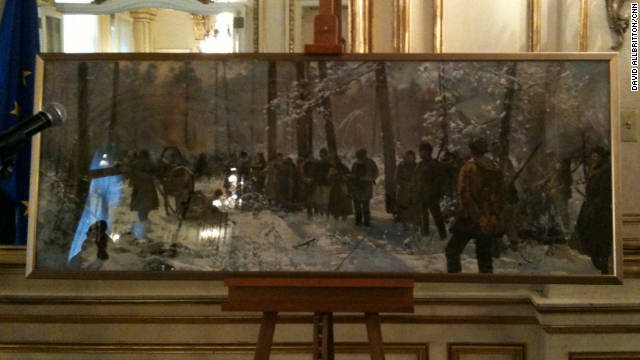 New York (CNN) -- Seven decades after Nazi forces looted the National Museum in Warsaw during World War II, two paintings by treasured Polish artist Julian Falat were repatriated in a ceremony Thursday night, according to a statement from the Immigration and Customs Enforcement agency.

The cultural artifacts were returned to Polish President Bronislaw Komorowski during the event at the Polish Consulate in New York City.

"It is so good in difficult histories we were able to develop very good, strong relations between our nations. I want to thank you for your good actions, for everything you have done."

The oil-on-panels by Falat (1853-1929), both winter scenes, "are two magnificent and very important pieces of art," said Bogdan Zdrojewski, minister of culture and national heritage, in an official statement.

"Off to the Hunt" which features bundled hunters against a snowy woods backdrop, was originally displayed at the Society for the Encouragement of Fine Arts in Warsaw November 1901 before it was sold to a private owner, given back to the society, and then transferred to the Polish National Museum in December 1939, the ICE news release stated.

"The Hunt," a wintry panorama with a sun-kissed glaze, was originally owned by Ludwik Norblin before it was endowed to the same fine arts society, and later moved to the national museum, the ICE news release stated.

Germany invaded Poland in September 1939, and during the occupation of Warsaw the paintings were taken.

The paintings were missing until 2006, when they were discovered by Polish officials at an auction in New York, according to the ICE press release.

A complaint filed in federal court last December claimed they were taken from the national museum by Benne Von Arent, an SS lieutenant colonel, in 1944, according to press release from Manhattan U.S Attorney's office.

"No one can ever provide just compensation to the victims of the Nazis' atrocities, but it is very gratifying for our office to play a role in returning the art that they looted during World War II to its rightful owners," New York U.S. Attorney Preet Bharara said in a statement.