When the Expressionist artist George Grosz, a celebrated painter, fled Nazi Germany in 1933, he left behind two important oil paintings and a watercolor with his Berlin dealer. Next month the United States Supreme Court, in deciding whether to hear the case, will determine whether Grosz’s heirs have any hope that legal action will help them recover the works from their current owner, the Museum of Modern Art. 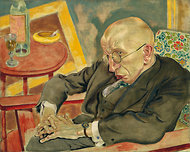 All rights reserved, Estate of George Grosz, licensed by VAGA, New York; Image courtesy of Museum of Modern Art
The portrait “Poet Max Herrmann-Neisse,” one of the three disputed works by George Grosz. 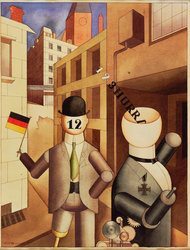 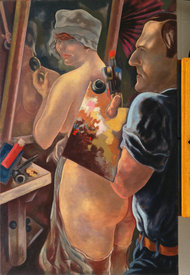 All rights reserved, Estate of George Grosz, licensed by VAGA, New York; Image courtesy of Museum of Modern Art
"Self-Portrait with a Model."

The lawsuit is an emotional, last-ditch effort by Grosz’s son Martin, and Martin’s sister-in-law, Lilian, to reclaim works they say were lost in the midst of Nazi persecution, only to end up two decades later in one of the world’s most elite art institutions.

Beyond the family, the case has drawn the attention of Jewish groups and experts in international law who argue that the Grosz case, like many others concerning art looted or lost during World War II, have too often been decided not on the merits but on whether claimants filed suit before the legal time limit.

MoMA, for example, has won several lower court decisions in the Grosz case because judges have ruled that the family simply filed its suit too late to be considered under New York State law. The United States has twice signed international agreements that urged nations to decide Holocaust-recovery claims based on their substance, not on legal technicalities. But the agreements do not have the force of law.

“Museums are breaking their own ethics codes and causing the U.S. government to break its international commitments by invoking our courts to resolve Holocaust-era art claims on technical grounds rather than on the merits,” said Jennifer Anglim Kreder, co-chairwoman of the American Society of International Law’s Interest Group on Cultural Heritage & the Arts.

Ms. Kreder is an author of a “friends of the court” brief supporting the Groszes. Several other organizations have also weighed in to argue against the use of statutes of limitations to bar such claims. The organizations include the American Jewish Congress and the nonprofit Commission for Art Recovery.

The museum, which acquired the works in the 1950s, declined to comment because the case is being litigated. But it has maintained in court documents that, regardless of the timing issue, it has diligently researched the artworks’ provenance and has found no evidence that the works were looted by the Nazis or any basis for disputing their legitimate ownership.

Raymond J. Dowd, the Groszes’ lawyer, counters that the lower court considered inadmissible evidence and also failed to take into account a 1998 federal law that was intended to help Holocaust-era victims recover their assets.

Since 2004, the Supreme Court has refused to review several Nazi-era art cases, most recently in June when it decided not to review a case brought against the Norton Simon Museum in Pasadena, Calif., which ran afoul of a different deadline statute. Lawyers involved in Grosz v. Museum of Modern Art agree that it is unlikely that the high court, given its reluctance to weigh in on matters of state law, will take up this case when it meets on Sept. 26 to review the appeal.

The tangled odyssey of the three disputed works — the portrait “Poet Max Herrmann-Neisse” (1927), “Self-Portrait With Model” (1928) and the watercolor “Republican Automatons” (1920) — begins in 1933. Grosz, a prominent member of the Dada movement best known for his biting caricatures, was a staunch critic of Hitler and emigrated to America just as the Nazi regime was coming to power. Grosz, who was not Jewish, left the three works with Alfred Flechtheim, his dealer, who was Jewish. Under the Nazis, Jewish businesses were boycotted, and within months Flechtheim also left Germany. He died penniless in London four years later.

The Grosz heirs say that Flechtheim was only temporarily caring for the three works and that he was forced to sell or abandon his holdings because of the climate of terror created by Hitler’s regime. The accompanying paper trail that shows bills of sale, liquidation papers and letters, they add, was later fabricated or distorted to mask illicit dealings.

MoMA, which obtained the two oil paintings and the watercolor at different times in the early 1950s, has said it was unaware of any doubts about the chain of ownership. Grosz himself saw the portrait of Herrmann-Neisse hanging on the museum’s walls in 1953, and wrote to his brother-in-law, “Modern Museum exhibits a painting stolen from me (I am powerless against that) they bought it from someone, who stole it.” Grosz, who died in 1959, never contacted the museum about regaining possession, however.

To his heirs the letter is proof that the painting was stolen; to the Modern, it is evidence that Grosz himself passed up opportunities to ask for his art within a reasonable time.

In any case, MoMA has argued, Martin Grosz and Lilian Grosz missed the deadline to file a lawsuit. Under New York law, claimants have three years to sue after their request for the return of their property is rejected.

The first formal request from the Groszes for the works came in November 2003. MoMA says it researched the provenance with scholars from Yale. In July 2005 the museum’s director, Glenn D. Lowry, wrote to the Groszes’ representative that evidence challenging the museum’s ownership was unpersuasive and that the transfers were not forced.

Mr. Lowry’s letter, the museum says, started the clock ticking. The family members, however, argue that Mr. Lowry told them that only the museum trustees could make a final decision, and the Groszes say that they were still negotiating with the museum until April 2006, when the museum board rejected their claim. In their view the board’s vote is what started the clock, and so their lawsuit, filed on April 10, 2009, would have fallen within the allotted three-year period.

Charles A. Goldstein, counsel to the Commission for Art Recovery, said “the museum strung along” the Groszes, holding out the possibility of a settlement while the clock ran out. “The museum was dead wrong,” he said.

During the Nazi regime about 100,000 artworks were looted from public and private collections, including forced sales. To address some of the issues such looting raised, the United States and more than 40 other nations adopted the 1998 Washington Conference Principles on Nazi-Confiscated Art, and the 2009 Terezin Declaration, which urge nations to decide claims “on the facts and merits” and to take historical circumstances into account when legal hurdles arise. American policymakers have frequently urged other countries to abide by these agreements.

In a keynote address at the Terezin conference, held in the Czech Republic, the leader of the United States delegation, Stuart E. Eizenstat, said he was concerned about the tendency to seek refuge in “technical defenses,” including the statutes of limitations.

Some lawyers who have represented MoMA and other museums in unrelated cases say that laws regarding time limits are not merely technical, but also speak to the question of whether it is possible to reconstruct an accurate historical record after a long lapse. Automatically giving claimants the benefit of the doubt can unfairly penalize honest and rightful owners, said Jo Backer Laird, a lawyer at Patterson, Belknap, Webb & Tyler, a New York firm that represents MoMA and other museums but is not currently involved in any restitution cases.

Mr. Goldstein of the Commission for Art Recovery counters that given stated United States policy on the issue, museums and the courts should respect the 1998 and 2009 agreements. “The statute of limitations was never intended to cover something like wartime mass pillaging of property,” he said.