Museum to give back a looted vase

The Minneapolis Institute of Arts has agreed to surrender a 2,500-year-old Greek vase that has been a museum showpiece for nearly 30 years. The institute intends to return the object to Italy, which says it was looted from an ancient grave. 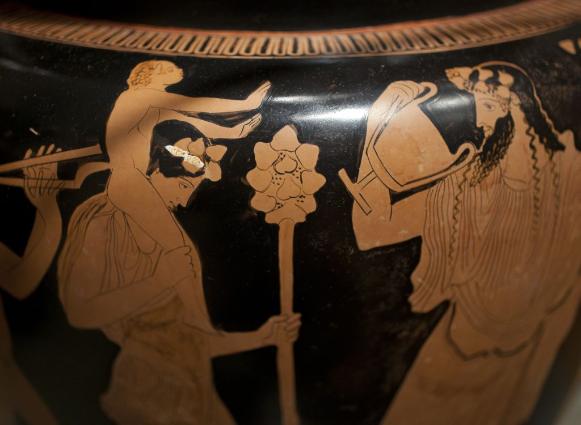 The satyr on a woman’s shoulders was the key to determining that a vase at the Minneapolis Institute of Arts was looted from Italy.

Italian government officials first claimed the ceramic vase in 2005 as part of a wide-ranging investigation into the source of antiquities at eight U.S. museums, including the Getty in Los Angeles, New York's Metropolitan Museum of Art and Boston's Museum of Fine Arts.

"We're very sorry to lose this object because it's a very important example" of ancient art that museums essentially can't acquire anymore, said Kaywin Feldman, the institute's director and immediate past president of the American Association of Museum Directors.

The Minneapolis museum is not accused of wrongdoing. Italian officials did not pursue the Minneapolis vase until the museum sought to resolve the issue starting last year.

Under pressure from Italy, American museums have been repatriating questionable objects to their source countries and have stopped buying antiquities that lack verifiable histories of ownership.

"I reached out to the Italian Culture Ministry," said Feldman, to see what evidence they had to support their claim.

Italian authorities produced three Polaroid photos of a looted object with details unique to the vase. The images came from a cache of 10,000 Polaroids of illegally excavated goods seized by Italian police in a 1995 raid on a Swiss warehouse operated by Giacomo Medici, an antiquities dealer who eventually was sentenced to 10 years in prison for trafficking in illegal art. Medici apparently bought antiquities from grave robbers, had them restored and then sold them to unsuspecting museums and private collectors through a network of well-connected art dealers.

The Minneapolis museum bought its vase in 1983. It came from Robin Symes, a prominent British antiquities dealer and sometimes associate of Medici who also brokered to the Getty many items that were later challenged. Getty officials evidently suspected Symes even while buying from him. In 1987 Symes was referred to as "a fence" by Harold Wilson, then chief executive of the Getty Trust, which oversees the museum, according to written notes procured by the Los Angeles Times.

About 2 feet tall and decorated with red figures on a black background, the vase is technically a "volute-krater" originally used to hold a mixture of wine and water. It depicts Dionysus, the Greek god of wine and revelry, leading a band of dancers including a young woman holding a child satyr on her shoulders. The woman and child appear to be the same as those in a Medici photo.

As part of the investigation, an archaeology professor at La Sapienza University in Rome determined that the vase most likely came from Rutigliano in the Puglia region of southern Italy where Greek settlements were established in ancient times.

The vase was a Minneapolis star because the museum's collection of antiquities is comparatively small, and museum scholars had identified its artist, now known as the Methyse Painter. Only 19 other surviving items have been attributed to Methyse from an era when art was generally produced by anonymous craftsmen.

Italy's minister of culture, Giancarlo Galan, praised the institute's cooperation in a statement. The "really terrific relationship" the museum developed with Italian officials may result in future loans or shows, but there are no specific plans and the museum is not getting anything in exchange for the vase, Feldman said.

The vase is on display at the museum while arrangements for its delivery to Italy are being finalized. It will be transferred there by the U.S. Immigration and Customs Enforcement's Homeland Security Investigations department, which is cooperating with Italy's national law enforcement agency, the Carabinieri for the Protection of Cultural Heritage.